The Mets elevated Zack Scott to acting general manager, filling a void left by Jared Porter, who was fired last week after the revelation of his lewd harassment of a female reporter four and a half years ago.

Scott, 43, had been a runner-up for the Mets’ general manager position, which ultimately went to Porter, an executive with the Arizona Diamondbacks, in December. After deciding on Porter, the Mets hired Scott, who had spent the previous 17 years with the Boston Red Sox, as their senior vice president and assistant general manager.

“Zack has plenty of championship experience to draw upon,” Sandy Alderson, the Mets’ president, said in a statement on Wednesday. “He has been an integral part of our decision-making processes since his arrival. The entire baseball operations staff, including myself, will continue to work collaboratively.”

The Mets’ new owner, Steven A. Cohen, dismissed Porter, 41, the morning after ESPN reported that Porter had sent more than 60 unsolicited text messages and photos, including one of a penis, to a female baseball reporter in June 2016 when he worked for the Chicago Cubs.

The Cubs and Major League Baseball said then that they would investigate Porter’s conduct.

Alderson said last week that the Mets would not hire Porter’s replacement from outside the organization and would instead lean on the personnel in place, himself included. Alderson was the team’s general manager from 2010 to 2018.

Scott had his hands in roster construction, payroll management, contract analysis, scouting and, most of all, analytics. His final two years in Boston were spent as an assistant general manager overseeing the club’s analytics, baseball systems and the advance and professional scouting departments. Before joining the Red Sox, he worked at a baseball simulation software company.

The front office news for the Mets on Wednesday came on the same day that Porter’s predecessor, Brodie Van Wagenen, was announced as the new chief operating officer and head of strategy and business development for Roc Nation Sports. 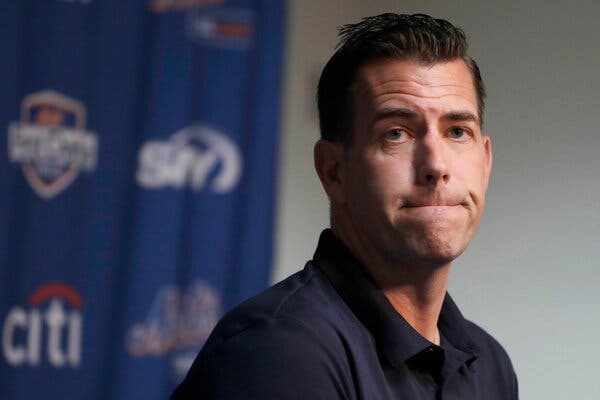 Brodie Van Wagenen was fired as general manager of the Mets shortly after Steven A. Cohen bought the team. He is returning to his life as a sports agent.Credit…Jeff Roberson/Associated Press

Van Wagenen returns to the world of player representation after spending two years as the Mets’ general manager. The club’s previous owners, the Wilpon family, surprised many in baseball in 2018 when they hired Van Wagenen, who had no previous front office experience. Complicating matters was Van Wagenen’s serving as the agent for Mets players such as pitcher Jacob deGrom, outfielder Yoenis Cespedes and infielder Todd Frazier.

The Mets were 112-110 under Van Wagenen, failing to make the playoffs in both years. Hours after Cohen closed on his purchase of the Mets in November, he cleaned house in the front office and fired Van Wagenen.

Van Wagenen will work with all the athletes at Roc Nation, not just those in baseball, and report directly to Jay-Z, the entertainment company’s founder, and Juan Perez, the sports agency’s president.

“Brodie’s knowledge of the business is indisputable and unparalleled,” Jay-Z said in a statement. “Since we first worked with Brodie, we realized the shared commitment to athletes both on and off the field. He’s always been extended family and now it’s official.”

Van Wagenen, previously an agent at IMG and Creative Artists Agency, has a history with Roc Nation Sports. When the agency was started in 2013, it partnered with Van Wagenen and C.A.A. to represent second baseman Robinson Cano and Cespedes, who remain Roc Nation clients.

Cano signed a 10-year, $240 million deal with the Seattle Mariners in 2013, was acquired by the Mets in 2018 under Van Wagenen and was suspended for the entire 2021 season by Major League Baseball for testing positive for a performance-enhancing drug a second time. Cespedes signed a four-year, $110 million deal with the Mets in 2016, missed nearly two seasons with baseball and nonbaseball injuries, and opted out of most of the 2020 season because of the pandemic after a spat with the team.