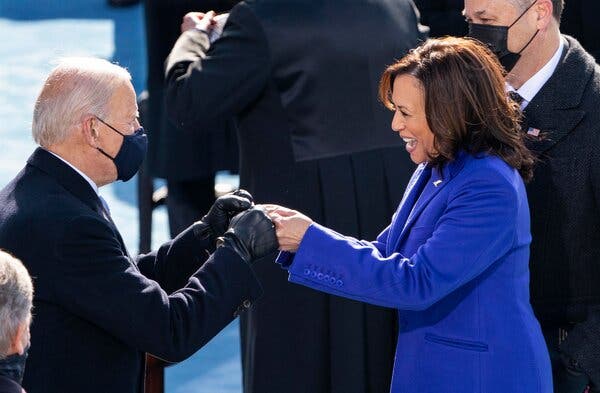 A fist bump between President Biden and Vice President Kamala Harris at the Capitol in Washington.Credit…Ruth Fremson/The New York Times

‘This is democracy’s day’

Joseph Robinette Biden Jr. on Wednesday became the 46th president of the United States, promising to move the nation forward on a path of unity, while Kamala Harris became the first woman — and the first person of color — to be sworn in as vice president.

“Democracy has prevailed,” Mr. Biden said during a sober, no-surprises inaugural event, as he urged Americans to put aside the bitter divisions that have deepened over the past four years and to come together to confront “cascading crises,” including the coronavirus pandemic. (Watch highlights or read the full speech, annotated by one of our Washington correspondents.)

Using a five-inch-thick Bible that has been in his family for 128 years, Mr. Biden took the 35-word oath of office, administered by Chief Justice John Roberts. The new president then began a swift effort to undo many of President Trump’s policies, signing 17 executive orders, memorandums and proclamations in the Oval Office.

Momentous first: Ms. Harris is now the highest-ranking woman in U.S. history, and she may find herself casting the tiebreaking vote in the Senate on many crucial pieces of legislation.

What does a Biden presidency mean for the world?

Despite domestic crises that will need his urgent attention, some experts predict the new U.S. leader will take an energetic role in foreign policy, even as he grapples with the pandemic, a major economic recovery effort and the deep divisions left by the Trump era.

In his inaugural address, President Biden pledged a restoration of American leadership. “We’ll lead, not merely by the example of our power, but by the power of our example,” he said.

Those who know Mr. Biden say he is unlikely to stay off the global stage for long. As vice president he reveled in his access to world leaders, and he has taken pride in his readiness to speak bluntly to foreign leaders.

“This is a guy who spent 40 years getting to know foreign leaders around the world,” said Peter Westmacott, the British ambassador to Washington during the Obama administration. “Once you’ve got a flavor for international relationships, you don’t turn your back on all that.”

A change in climate: In some of his first acts as president, Mr. Biden rejoined the Paris climate agreement, canceled the Keystone XL pipeline and ordered federal agencies to begin the process of reinstating environmental regulations that were reversed under the Trump administration.

Trump’s legacy: The departing administration’s declaration that China is committing genocide was the latest in a series of actions that risk complicating Mr. Biden’s foreign policy agenda.

Though deaths rose across the world, the Americas fared the worst, with a 15 percent rise in deaths in the past week. Most of the decline in coronavirus cases occurred in Europe, which registered a drop of 15 percent in the same period, according to W.H.O. data. New cases decreased last week by 11 percent in the U.S. and by 19 percent in Britain, two of the hardest-hit countries.

If you have 8 minutes, this is worth it

A love letter to a very particular rye bread

When Gottlieb’s Bakery, above, which shut its doors in 1994, reopened in Savannah, Ga., Herbert Buchsbaum, an editor for The Times, rediscovered a taste of his childhood: a sandwich on the bakery’s tangy, chewy rye.

“A morsel of madeleine in a spoonful of tea evokes a childhood in a French village,” he writes. “A bite of rye with Dijon mustard calls up mine in Savannah.” But that link to the past shattered with a pandemic, and a death.

Madrid explosion: A blast that destroyed several floors of a building in the Spanish capital appeared to be the result of a gas leak, the mayor said. Three people died and 11 others were injured.

Algeria-France relations: A study commissioned by the French government offers proposals aimed at reconciliation with the country’s former colony. But it does not recommend an official apology, and it skirts the issue of systemic torture by French troops, which President Emmanuel Macron has already acknowledged.

Bali tourist deportation: An American woman who has been living in Bali during the pandemic was deported on Thursday, after praising the Indonesian island as “queer friendly” and offering to help foreigners enter the country despite its coronavirus travel ban. Immigration officials said she was “spreading information that could unsettle the public.”

Snapshot: Senator Bernie Sanders’s inaugural look, including his patterned recycled mittens, quickly became a meme. “In Vermont, we dress warm,” he said, chuckling. “We know something about the cold. And we’re not so concerned about good fashion.”

An eerie quiet: For those few people who tried to attend the inauguration, difficulty gave way to disappointment, as members of the public were kept out and left to watch the ceremonies on their phones.

Presidential presents: Leaders from both the House and the Senate gathered in the Capitol rotunda to bestow four gifts on the new president and vice president.

“The dawn is ours”: An inaugural highlight: Amanda Gorman, a 22-year-old poet, recited “The Hill We Climb,” about the possibility of unity, redemption and reconciliation.

What we’re reading: This Town & Country article on the new first dogs. Champ and Major Biden, somewhat goofy German shepherds, will soon make themselves at home in the White House.

Cook: Chickpeas and pasta come together in this hearty vegan main.

Listen: Arlo Parks, a 20-year-old British singer-songwriter, talks about making music that strikes the perfect balance of happy and sad.

Squat: Take 11 minutes out of your day for an equipment-free workout with proven fitness benefits.

Whether you’re into lentils or lunges, At Home has our full collection of ideas on what to read, cook, watch and do while staying safe at home.

Covering a war zone — or an inauguration?

For the swearing-in of Joe Biden, two weeks after a mob stormed the Capitol, many news outlets sent those accustomed to reporting on wars and political violence to cover what is usually a tame political pageant.

Some reporters and photographers brought along protective gear used in combat zones, and several news outlets said they were taking precautions to protect their journalists at the inauguration, which was fortified by miles of fencing and thousands of National Guard troops.

The Committee to Protect Journalists issued a safety advisory detailing risks that could include “potential vehicle ramming of crowds.” Reporters Without Borders put out a similar warning.

“We realized that we had the same conversations about what to do during the uprisings in Libya or Cairo or fighting in Baghdad or coup attempts here or there,” one photographer said of his conversations with editors at The Intercept. “All of a sudden, you take a deep breath and realize you’re actually talking about covering the inauguration of the president in Washington, D.C.”

The New York Times sent nearly all of its reporters in Washington to cover the inauguration. Many of them have experience reporting in war zones “given that the national security team and Pentagon correspondents are based in the bureau,” said Elisabeth Bumiller, the Washington bureau chief.

Janine di Giovanni, who spent nearly 30 years reporting on combat and its aftermath in the Middle East, the Balkans and Africa, said on Tuesday that she was weighing whether to go to Washington for the inauguration.

“I’m used to being a war reporter in countries where there were no institutions, or the institutions shattered very rapidly,” she said. “This is a country that had, until recently, extremely strong institutions that protected us descending into the abyss, and to see what’s happening now is disturbing beyond belief.”

P.S.
• We’re listening to “The Daily.” Our latest episode features supporters of President Biden talking about his inauguration.
• Here’s today’s Mini Crossword, and a clue: What Broadway and the Milky Way have in common (five letters). You can find all our puzzles here.
• The Times won the Philip Meyer Journalism Award from Investigative Reporters and Editors for its coronavirus tracking project, which has been keeping count of cases since the beginning of the pandemic.