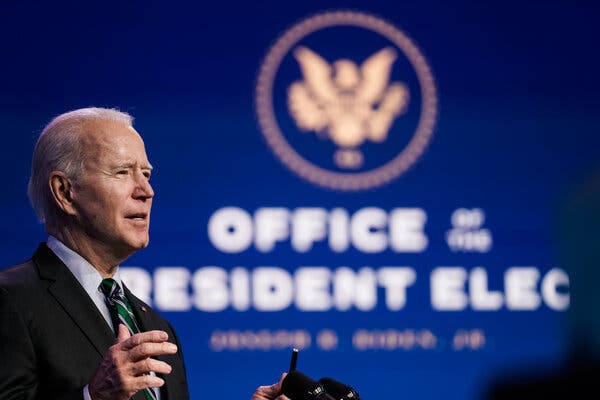 When he begins his presidency this week, Joe Biden will inherit a collection of crises unlike any in generations — the coronavirus pandemic, economic turmoil, racial strife and the aftermath of the assault on the Capitol. He plans to start his administration with dozens of executive directives in a 10-day blitz meant to signal a turning point for the U.S.

According to a memo from his incoming chief of staff, the new president will quickly order the following steps to immediately reverse President Trump’s most hotly contested policies:

At the end of Trump’s tenure: A lucrative market for pardons is coming to a head, with some of Mr. Trump’s allies collecting fees from wealthy felons or their associates to push the White House for clemency.

Potential violence: The atmosphere was tense in Washington and at statehouses across the country over the weekend. In many states, military vehicles and police barricades lined the streets near government buildings and officials braced for the possible influx of pro-Trump protesters ahead of the inauguration on Wednesday.As of Sunday afternoon, there were no reports of violence, but law enforcement and National Guard troops remained on high alert.

Aleksei Navalny is detained on his return to Moscow

The Russian opposition leader, who had been recovering in Germany since August from a near-deadly poisoning, was detained on Sunday night at passport control at Sheremetyevo Airport in Moscow.

The police also detained some Navalny supporters who had turned out to greet him at the airport.

Russia’s penitentiary service, which has said that Mr. Navalny was wanted for violating the terms of a prior suspended sentence, released a statement saying that he had been detained pending a court hearing.

Minutes before he was taken into custody, Mr. Navalny gave an impromptu statement to journalists in a transit area at a terminal. “I am not afraid,” he said. “I know that I am right. I know all the criminal cases against me are fabricated.”

Impact: His detention could set off protests and an international backlash. He has accused the Kremlin of trying to murder him in YouTube videos viewed more than 40 million times.

A health care worker getting inoculated at a governmental hospital in Pune, India, on Saturday.Credit…Atul Loke for The New York Times

India’s rollout of coronavirus vaccines is one of the most ambitious and complex initiatives in its history. Prime Minister Narendra Modi kicked off the vaccine drive, which started with health care workers, on Saturday during a live television address.

The campaign is unfolding in a country that has reported more than 10.5 million infections, the second-largest caseload after the United States, and 152,274 deaths, the world’s third-highest tally.

The government had hoped to inoculate about 300,000 people on Saturday, but government data showed that 165,000 people received a shot. The plan is to give the vaccine to millions more health care and frontline workers by the spring.

The supply: Mr. Modi has pledged to inoculate 300 million health care and frontline workers, including police officers and, in some cases, teachers, by July. But the Indian government has purchased only 11 million doses of the AstraZeneca-Oxford vaccine and 5.5 million doses of one produced by Bharat Biotech in India.

Vaccines now: The more contagious variant of the virus, discovered in Britain and which has now been detected in more than 50 countries, adds to the urgency of mass vaccination campaigns.

If you have 9 minutes, this is worth it

When Kamala Harris is sworn in this week, she will represent many firsts: First woman to be vice president. First Black woman. First woman of Indian descent.

And another milestone will be on display: her more expansive version of the American family.

Potential Merkel successor: Armin Laschet was chosen as the next leader of Angela Merkel’s conservative Christian Democratic Union party ahead of fall elections that will decide who succeeds her as chancellor. Analysts said that the party’s popularity might fizzle when it sinks in that Ms. Merkel is really leaving.

K2 milestone: A Nepali team reached the peak of the world’s second-highest mountain, a feat never before accomplished during winter. K2 rises 28,251 feet, second only to Mount Everest.

Uganda election: President Yoweri Museveni will begin a sixth five-year term after being declared the winner in voting that his rival, Bobi Wine, a 38-year-old rapper-turned-lawmaker, and independent international observers called unfair.

Luxury watch market: For the first time, China is the world’s largest importer of Swiss watches.

Snapshot: Above, a team of researchers in Thailand catching bats as they fly out of the Khao Chong Phran cave. The scientists are looking for any potential links to the coronavirus fueling the pandemic, but have so far found only other coronaviruses in the bats.

Phil Spector: One of the most influential and successful record producers in rock ’n’ roll died on Saturday at the age of 81. Since 2009, he had been serving a prison sentence for the murder of a nightclub hostess he had taken to his home after a night of drinking in 2003.

What we’re reading: This Mainichi article on a “rent-a-person who does nothing” in Tokyo. It’s a reminder that a presence, sometimes, is all that is needed.

Now, a break from the new

Cook: This unfussy, old-fashioned butterscotch pudding is easy to stir together on top of the stove — and hard to mess up.

Watch: As we head into the presidential inauguration of Joe Biden this week, here are six entertaining films about real and fictional presidents.

Do: Improve your life with these home projects. None of these five chores take more than an hour, and each ends with that satisfying thought: Why didn’t I do that sooner?

Start your week with some creativity. At Home has our full collection of ideas on what to read, cook, watch and do while staying safe at home.

China is experiencing its worst surge of the coronavirus since last summer, forcing at least 22 million people into lockdown and challenging the government’s success in subduing the disease. Keith Bradsher, The Times’s Shanghai bureau chief, spoke to our colleagues from the Coronavirus Briefing about the latest outbreaks.

In Shanghai, Keith said, office buildings and apartment compounds are, once again, checking smartphone location tracking codes to ensure that residents haven’t traveled to hot spots. If someone has traveled to a risky area, that person must immediately report to the authorities and enter a home- or government-supervised quarantine.

“Mandatory immediate quarantine ordered by the government, in total isolation, of every symptomatic or asymptomatic person, plus all of their close contacts” has been China’s secret to containing the coronavirus, Keith said. “In some cases, they identify 800 close contacts per person, so their definition of a close contact is not very close at all.”

With the U.S. and Europe in the throes of another brutal surge, there has been a great deal of nationalistic sentiment in China, promoting the country’s approach to the virus. “There are definite worries about the latest outbreaks,” Keith said. “But I have found a quiet confidence among many people that China has beaten this problem before and can do so again.”

P.S.
• We’re listening to “The Daily.” Our latest episode is on a Republican lawmaker who voted to impeach President Trump.
• Here’s our Mini Crossword, and a clue: Look forward to (five letters). You can find all of our puzzles here.
• Yewande Komolafe and Eric Kim are joining The Times as cooking writers. Readers may remember Yewande’s 10 essential Nigerian recipes and Eric’s explanation of banchan, the small dishes that often accompany Korean meals.