WASHINGTON — Two years ago, Janet L. Yellen co-signed a letter to Treasury Secretary Steven Mnuchin urging him not to move forward with plans to relax oversight of big financial firms, warning that doing so could threaten the stability of America’s financial system.

The plea by Ms. Yellen, who was joined by Ben Bernanke, another former Fed chair, and former Treasury secretaries Jacob J. Lew and Timothy F. Geithner, went unheeded. Under Mr. Mnuchin’s direction, the Financial Stability Oversight Council pressed ahead with plans to stop designating large, nonbank financial institutions like insurers and asset managers as a threat to the financial system, chipping away at a key pillar of the post-financial crisis regulatory era.

Now Ms. Yellen, who was nominated by President-elect Joseph R. Biden Jr., to be Treasury secretary, is poised to restore some of the Trump administration’s regulatory rollbacks if she wins Senate confirmation.

Her confirmation hearing before the Senate Finance Committee on Tuesday is expected to focus largely on Ms. Yellen’s plans to revive a pandemic-stricken economy. But she will also be under pressure to show Democrats and progressive groups that she is ready to end what they view as Mr. Mnuchin’s coddling of Wall Street.

In recent weeks, Ms. Yellen and Wally Adeyemo, Mr. Biden’s nominee for Treasury’s deputy secretary, have been on a virtual listening tour of industry groups across Washington. According to people who participated in those sessions, the two have emphasized the need to create “equitable growth,” using the tools of the Treasury Department to combat climate change and rebuild regulatory institutions like the F.S.O.C.

“There’s an emphasis on working people, racial justice and inequality, and that’s a good place to start,” said Lisa Donner, executive director of Americans for Financial Reform, an advocacy group that met with Ms. Yellen this month. “But reversing things that the current Treasury Department has done is not enough.”

Americans for Financial Reform, a left-leaning organization that has spent the past four years largely shut out of the Treasury Department, wants Ms. Yellen to set a new direction for the F.S.O.C., which has the power to subject big financial firms to stricter oversight. It was created by the 2010 Dodd Frank law to prevent a repeat of what happened in the run-up to the financial crisis, when firms like the insurance giant AIG made risky bets outside of regulators’ reach and then needed to be bailed out by taxpayers.

Its power has been winnowed under the Trump administration, which released AIG and three other financial firms from stricter oversight.

Americans for Financial Reform has urged Ms. Yellen and transition officials to harness F.S.O.C.’s power to designate climate change as a “systemic risk” and create tools to limit leverage at hedge funds, which are only lightly regulated.

Ms. Yellen likely has a new regulatory approach in mind. She called last year for a “new Dodd-Frank,” arguing at a Brookings Institution event that existing laws were insufficient for dealing with problems in the “shadow” banking sector that emerged when the pandemic caused severe market turmoil.

The former Fed chair has also demonstrated that she is willing to punish banks for misdeeds when warranted. In 2018, on Ms. Yellen’s last day on the job, the Fed required Wells Fargo to replace four members of its 16-person board for failing to properly oversee the bank amid a fraud scandal.

But Ms. Yellen’s experience at the Federal Reserve and her understanding of the banking system have eased concerns among some in the financial sector who might otherwise be wary that an incoming Democratic administration will quickly roll out onerous new rules. In meetings with financial services groups, Ms. Yellen has indicated that helping to craft and oversee the Biden administration’s economic relief efforts will initially be her top priority.

“She’s extremely knowledgeable about the banking system; she’s familiar with the strength and the role of the large banks, including the positive role that they have played over the last year,” said Kevin Fromer, chief executive of the Financial Services Forum, a lobbying group that also met with Ms. Yellen this month.

Ms. Yellen will have to recuse herself from Treasury matters involving certain financial institutions as a result of an ethics agreement she signed when disclosing paid speeches that she gave to major corporations and Wall Street banks since leaving the Federal Reserve in 2018. According to her financial disclosure, which was released on New Year’s Eve, Ms. Yellen earned more than $7 million in speaking fees from firms such as Goldman Sachs, Citigroup and Citadel.

Jeff Hauser, the director of the Revolving Door Project, called on Ms. Yellen to release the contents of her speeches. But he said that they were less troubling than some of the consulting work that Mr. Biden’s other nominees have done in recent years for firms such as Blackstone, a giant asset manager run by Stephen Schwarzman, and the data-mining company Palantir. 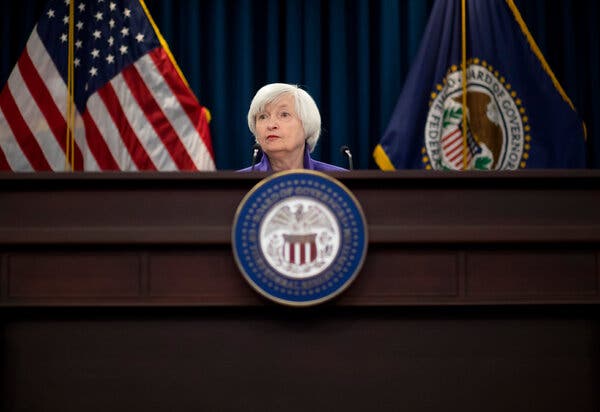 Ms. Yellen in 2017 when she was Fed chair. Her experience leading the central bank and her understanding of the banking system have eased concerns among some in the financial sector.Credit…Eric Thayer for The New York Times

The Biden transition team has declined to make videos or transcripts of the speeches public, noting that she was usually participating in unscripted discussions about the economy.

“Yellen did not deliver prepared remarks at her speaking engagements; most were armchair conversations where she answered questions from a moderator and some of whom were reporters,” said Sean Savett, a Biden transition spokesman. “She has already signed ethics agreements governing her relationship with these entities and she will of course abide by all appropriate recusals.”

Republicans on the Senate Finance Committee could question Ms. Yellen about the speaking fees, but Democrats are unlikely to press her on the issue.

“This is the worst economic crisis in 100 years, and nobody is better qualified than Secretary-designate Yellen to lead an economic recovery,” said Senator Ron Wyden of Oregon, who will become the Finance Committee chairman when Democrats take control of the Senate. “She deserves much of the credit for the longest economic expansion in our history, which lasted until the pandemic hit.”

The confirmation process is expected to be a relatively smooth one. Senator Charles E. Grassley of Iowa, currently Republican chairman of the Finance Committee, has spoken positively of Ms. Yellen since Mr. Biden picked her for the job.

Mr. Grassley said on Friday that he had spoken to Ms. Yellen and said he emphasized to her the importance of cooperation with congressional oversight, and also expressed concern that tax increases and more regulation would slow the economic recovery.

While Ms. Yellen, an economist by training, has a deep understanding of monetary policy, the portfolio at the Treasury Department is vast. She will likely face questions about America’s economic relationship with China, her position on sanctions policy as it relates to Iran and her thoughts on tax policy. She could even face questions on thorny subjects that Treasury deals with, such whether Harriet Tubman should be the face of the $20 bill, an Obama administration initiative that Mr. Mnuchin let lapse.

Ahead of Ms. Yellen’s hearing, several groups have suggested that they are enthusiastic for a change in tone and personnel at Treasury. Mr. Mnuchin has managed the department with a small staff and was most receptive to executives from large banks and companies.

Luz Urrutia, chief executive of the Accion Opportunity Fund and Opportunity Fund, said she came away feeling hopeful after a meeting with Ms. Yellen last month about Community Development Financial Institutions. The Trump administration repeatedly tried to cut funding for the CDFI Fund’s grant programs, which Treasury oversees. Ms. Yellen told the group that she wanted to expand the lending capacity of CDFIs so that to that they can better serve minority communities.

“They did not think that CDFIs provided the level of impact and ability to serve these communities,” Ms. Urrutia said of the Trump administration. “It’s a stark difference between Yellen and the current administration.”