WASHINGTON — Janet L. Yellen, President-elect Joseph R. Biden Jr.’s nominee for Treasury secretary, vowed on Tuesday to pursue policies to help workers whose livelihoods have been upended by the pandemic as she warned lawmakers that the U.S. economy faced a painful stretch before coronavirus vaccines were fully deployed.

Ms. Yellen made her comments at her confirmation hearing before the Senate Finance Committee. A former Federal Reserve chair, she enjoys bipartisan support and is expected to win confirmation. But the hearing underscored the challenges that the Biden administration will face in trying to put its economic agenda into place, with Republican lawmakers drawing early battle lines and voicing opposition to the $1.9 trillion stimulus package that Mr. Biden has proposed, along with other tax and spending plans.

With Democrats holding a slim majority in the House and narrowly controlling the Senate, Mr. Biden may need the support of Republicans to get some of his priorities through Congress. But on Tuesday those lawmakers resurrected concerns about adding to the federal budget deficit to argue against Mr. Biden’s plans and expressed continued opposition to several of his priorities, including sending more aid to states and local governments, boosting unemployment benefits and raising the minimum wage.

“We’re looking at another spending blowout,” said Senator Patrick J. Toomey, Republican of Pennsylvania. “The only organizing principle I can understand, it seems, is to spend as much money as possible, seemingly for the sake of spending it.”

Ms. Yellen, a labor economist, made an assertive case that the greatest long-term threat to the nation was not the federal budget deficit but doing too little to help workers.

“Without further action, we risk a longer, more painful recession now and long-term scarring of the economy later,” she said.

She emphasized the importance of ensuring that the recovery efforts accounted for the needs of women and minorities, who were vulnerable going into the crisis and who have been bearing the brunt of the economic fallout.

The hearing showcased the stark differences in the policymaking that is about to grip Washington. From China and climate change to tax policy and bank regulation, the Biden administration is set to reverse course sharply from the direction set by President Trump.

Mr. Biden’s $1.9 trillion stimulus package would provide $1,400 in direct payments to the public, more expanded unemployment insurance, money for states and cities, and a robust investment in health care spending to roll out vaccines and testing capacity. Although Congress passed a $900 billion package last month, the economy is showing signs of stalling as employers shed jobs and vaccinations have fallen short of the government’s goals.

Mr. Biden, who served in the Senate for 36 years, has said he wants to bring Republicans on board for his plan. It is not clear, however, to what extent Democrats in Congress will try to work with Republicans on the legislation or if they will try to push their priorities through using a mechanism called budget reconciliation, which requires only a simple majority in the Senate.

And while Mr. Biden has suggested said that he wants an initial package focused squarely on the pandemic, some lawmakers, such as Senator Bernie Sanders of Vermont, the incoming Budget Committee chairman, are already calling for tax increases on the wealthy. 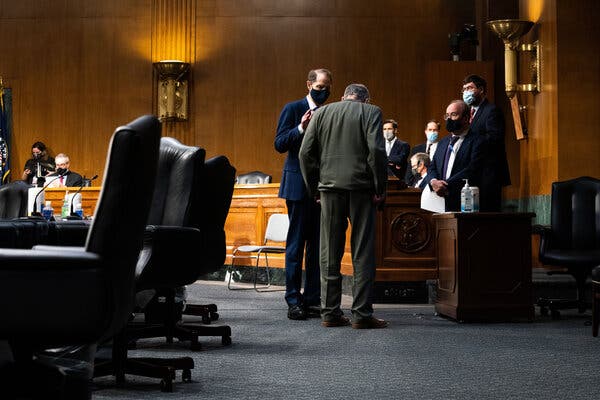 Republicans pressed Ms. Yellen on the tax policies she would pursue and whether the White House would try to reverse Mr. Trump’s 2017 tax cuts. She said any move to raise taxes would come only after the health crisis abated.

“The focus right now is on providing relief and on helping families keep a roof over their heads and food on the table, and not on raising taxes,” she said.

Still, Ms. Yellen made clear that the Biden administration would look for ways to use tax policy to improve the economic lives of middle- and low-income households. “I believe in a fair and progressive tax code where wealthy individuals and corporations pay their fair share,” she said. “We have to rebuild our economy so that it builds more prosperity for more workers.”

Other Republicans on the committee challenged Ms. Yellen with familiar complaints about Democratic-backed economic policies. They warned that raising the federal minimum wage to $15 an hour from $7.25, as Mr. Biden wants to do, would harm struggling small businesses. And they argued that another round of stimulus checks would give money to many people who did not need it.

“Now is not the time to enact a laundry list of liberal structural economic reforms,” said Senator Charles E. Grassley of Iowa, who for the time being remains the chairman of the committee.

Appearing at the hearing by videoconference, Ms. Yellen, 74, calmly rebutted the critiques of her proposals. “There are many families that are bearing exceptional financial burdens that are not addressed by unemployment compensation,” she said.

Despite backing $1.5 trillion in tax cuts and more government spending under Mr. Trump, Republicans have been sounding increasingly hawkish about the national debt since Mr. Biden won the election. Questioned about how the United States could afford the policies that Democrats are proposing, Ms. Yellen argued that such proposals were fiscally responsible.

“To avoid doing what we need to do now to address the pandemic and the economic damage that it’s causing would likely leave us in a worse place economically and with respect to our debt situation than doing what’s necessary,” she said.

Pressed on the minimum wage, Ms. Yellen pointed to research that has found little evidence of the kind of large-scale job losses and other damage that business lobbying groups have voiced strong concerns about over the years. For instance, when one state raised the minimum wage and a neighboring state did not, the job losses in the state with the increase were minimal, she said.

Addressing the pandemic is Ms. Yellen’s top priority, but she signaled a vastly different approach to the Treasury Department from the one taken by the man she would replace, Steven Mnuchin.

The Treasury secretary is the country’s top economic diplomat, and Ms. Yellen will be tasked with repairing relationships around the world after four years of Mr. Trump’s inflammatory tactics. The most critical strategic relationship is with China, she said, and she intends to corral American allies to pressure to end China’s “illegal, unfair and abusive” practices.

The remarks indicated that Ms. Yellen believes that the trade deal that Mr. Trump signed with China a year ago is insufficient and that his strategy of bilateral haggling over tariffs had failed. But that is not to suggest that the Biden administration will take a more accommodating approach. Ms. Yellen said she would ensure that the “full array” of economic tools would be deployed to combat Chinese misbehavior, and she called the Chinese government out for “horrendous human rights abuses.”

The Treasury Department under Ms. Yellen would also place a strong emphasis on climate change and the risk that rising temperatures pose to the financial system. She said she would appoint a senior official in charge of climate matters at the department, create a “hub” to assess financial risks and study tax incentives for electric cars and other environmentally friendly policies.

The Trump administration has questioned the science behind the causes of climate change, and Mr. Mnuchin has fought to keep mentions of climate change out of joint statements at international economic summits. Despite driving an electric car, he did not think the industry should be subsidized.

Senator Ron Wyden, the Oregon Democrat who is in line to become the Finance Committee’s chairman, said he hoped Ms. Yellen would receive a vote on the floor of the Senate as early as Thursday.

Eight former Treasury secretaries signed a letter on Tuesday calling for her swift confirmation and describing her credentials as unrivaled. In a note to Treasury staff on his last full day on the job, Mr. Mnuchin wished Ms. Yellen “great success.”