PARIS — In December, while French theaters remained shut because of the pandemic, Hubert Mahela was able to perform his latest show a dozen times. The reason? He makes puppet shows for young audiences, who happened to be in school — and in need of entertainment.

Puppetry, an art form often looked down on as lowbrow, lo-fi theater, has found itself at an unlikely advantage this winter in France. Primary and secondary schoolchildren are currently the only audience members officially allowed to attend performances here, as long as the local authorities grant permission.

“We can’t just work through video, with no audience,” Mahela said in a recent interview. “It was such a joy to know that it’s possible to be careful and keep going.” He took his one-man show “Lisapo Ongé!,” in which he re-enacts a tale from his native Congo with expressive hand-held puppets, to schools in Fontenay-sous-Bois, a suburb of Paris, and in the northern city of Amiens.

The situation for French puppeteers is bittersweet. While it constitutes a return to their roots, as children remain their most faithful fans, many of them have worked hard to position the form as more than family-friendly fare. In France, high levels of public funding for the arts helped puppetry make the transition, in the second half of the 20th century, from a craft passed down in family circles to a well-established sector of the performing arts.

Puppetry even has a capital of sorts in France: Charleville-Mézières, a former metallurgy stronghold near the Belgian border. It hosted the first World Puppetry Festival in 1961 and became home to the International Institute of Puppetry two decades later.

In 1987, a puppetry school, the École Nationale Supérieure des Arts de la Marionnette, or ESNAM, opened. While it admits only 15 students every three years, some of puppetry’s biggest names honed their craft there, including the American artist and director Basil Twist. Other training institutions have opened internationally, but in a recent interview at the Opéra Comique in Paris, Twist said he still considered his alma mater “the top school in the world” for the art form. 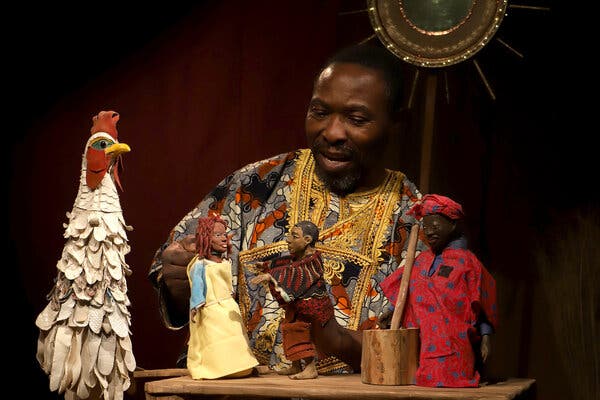 Hubert Mahela performing his one-man show “Lisapo Ongé!” In it, he re-enacts a tale from his native Congo.Credit…Corentin Praud

“France has an enormous network of cultural institutions, one of the largest in the world, so puppetry was able to carve a niche within it,” the school’s director of pedagogy, Brice Coupey, said in a phone interview.

The puppeteer Grégoire Callies had a front seat for that development. From 1997 to 2012, he directed the first National Dramatic Center devoted to the form, in Strasbourg. He is currently at the helm of the Théâtre Halle Roublot in Fontenay-sous-Bois, where he set up Covid-averse performances by several artists in schools, including Mahela’s “Lisapo Ongé!”

“What’s good about the world of puppetry is that most productions are nimble, they can go everywhere,” Callies said at his theater recently. “While theater productions have a hard time coming up with big tours, there is always a possibility to work.”

That much was clear from “Les Plateaux Marionnettes,” a closed showcase for programmers and journalists hosted at the Théâtre Halle Roublot in late January. Over one day, five artists and companies presented short productions, most of them new. Alongside Mahela’s “Lisapo Ongé!,” multiple branches of puppetry were represented. In “Hematoma(s),” directed by Cécile Givernet and Vincent Munsch, cutout shapes and shadow lighting were elegantly woven to tell a story of childhood trauma. With “The Forest Doesn’t Exist,” Kristina Dementeva and Pierre Dupont, who graduated from ESNAM in 2017, brought an absorbing sense of Beckettian absurdity to the musings of two sock animals.

Dementeva, who started working with inanimate objects in her native Belarus, moved to Charleville-Mézières from the Belarusian capital, Minsk, to attend ESNAM. “The school is very famous among puppeteers abroad, and it’s free,” she said. “Belarus has a great underground puppet scene, but there are many more companies in France, and more public support.”

Yet in a country where sophistication is a point of pride, puppet theater remains on the fringes of the biggest venues and festivals. It has earned backing from major figures over the years, including the director Antoine Vitez, who had plans to fold puppetry into the missions of France’s premier stage troupe, the Comédie-Française, when he died in 1990. Still, Callies believes puppetry hasn’t managed to achieve the same level of recognition as hip-hop dance or circus, two art forms that channeled contemporary dramaturgy to bridge the gap with highbrow genres.

“One of the tragedies of puppetry is that the artists who want to make it erase the word ‘puppet.’ They leave it behind,” Callies said, pointing to its reputation as a childish form of expression. “It’s a French neurosis, because if you go to Germany or Italy, adults also attend puppet theater shows.”

On the flip side, some puppeteers who have moved toward contemporary theater suggest that French puppetry remains fairly conservative. The renowned stage director Gisèle Vienne, who graduated from ESNAM in 1999, said in a phone interview that her work — which is geared toward adults, with complex subject matter — was mostly embraced by dance and theater artists at the time. In 2007’s “Jerk,” she even explored the darker side of puppetry’s reputation (from schizophrenic toymakers to murderous puppets) in popular culture.

“The world of puppetry told me that what I was doing wasn’t puppetry,” Vienne said. “It’s a really extraordinary medium, but I have found that the most powerful puppet-based experiments happen in the field of contemporary art.”

Yet there are signs that younger puppeteers are hungry to break down the remaining barriers between their craft and mainstream theater. The profession itself is changing. “It used to be very masculine. There are a lot more women now, who do very interesting work,” Callies said.

The productions presented as part of “Les Plateaux Marionnettes” tackled ambitious themes, from family violence to forgotten female figures from world history (in a spirited workshop presentation by Zoé Grossot, another ESNAM graduate). The climate emergency is also a recurring concern among ESNAM’s students, according to Coupey: “Some refuse to work with polluting materials.”

At the Théâtre Halle Roublot, the sheer pleasure of watching live theater came with a sense of safety. With no more than three performers onstage at any point, and precautions including masks and social distancing, the risk of spreading Covid-19 seemed as limited as it may ever be inside an auditorium.

“We can even afford to work on a play with 20 characters, because we don’t need 20 actors,” Givernet, the co-director of “Hematoma(s),” said with a laugh after the show. Lowbrow or not, puppets are well suited to this moment.