Super Bowl LV could be decided by penalties. And if that happens, Tom Brady and the Tampa Bay Buccaneers will have a distinct, unsurprising and perhaps unfortunate (for the Kansas City Chiefs) advantage.

Buccaneers’ opponents were charged with 24 pass interference penalties during the regular season, the highest total since Football Outsiders began tracking the statistic in 1985. The Buccaneers benefited from 395 yards on those infractions. If pass interference were a person, it would be the Buccaneers’ sixth most productive receiver, contributing more yardage to their passing game than tight end Cameron Brate.

Now, suggesting that Brady gets reputation-based “superstar calls” would be as sacrilegious as insinuating that Michael Jordan got away with traveling now and then or that Alex Rodriguez benefited from a narrower strike zone than the average slugger’s. Perish the thought.

A less sinister explanation of the Buccaneers’ pass interference record is that an experienced quarterback like Brady can spot defenders jostling his receivers and throw passes in their direction knowing he will get either a catch or a flag. In fact, the league-leading beneficiaries of pass interference penalties in recent seasons have indeed been wily (read: old) veterans — Philip Rivers in 2019 and 2017, Drew Brees in 2018.

Over all in the regular season, the Buccaneers were charged with 11 fewer penalties for 300 fewer yards than their opponents, the largest net differential in the N.F.L. The Chiefs were closer to the other end of the spectrum: They committed eight more penalties than their opponents for 159 more yards, the sixth-worst net yardage differential in the league.

The Chiefs committed 23 offensive holding penalties, the N.F.L.’s second-highest total during a regular season in which officials called the infraction the fewest times since at least 1998. The Chiefs committed 23 false starts, tied for the third-highest figure. Most troublingly for a team about to face Brady’s Untouchables, Chiefs defenders were flagged for 15 defensive pass interference penalties, the third-highest total in the N.F.L.

The Chiefs also had an unfortunate pattern of having big plays called back because of offensive infractions. According to the N.F.L. Game Stats and Information System, the Chiefs had 310 offensive yards nullified by penalties, the second-highest figure in the league. A holding penalty negated a would-be touchdown in their Week 5 loss to the Las Vegas Raiders, and several Chiefs victories were narrower than they should have been because apparent touchdowns or 20-yard gains turned into 10-yard losses.

The Buccaneers had just 142 yards nullified by penalties. After all, only a fiend would throw a flag that might deny our beleaguered society an opportunity to cherish one of Brady’s last memorable moments, right? 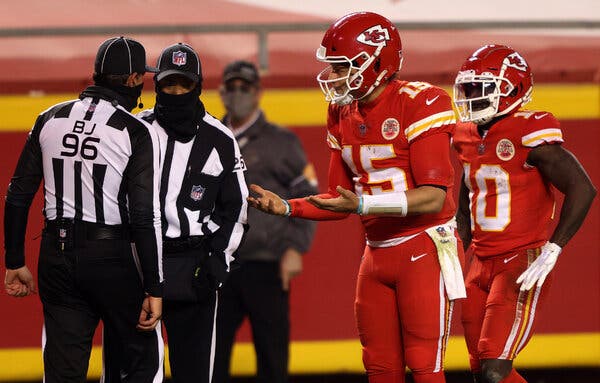 According to the N.F.L. Game Stats and Information System, the Chiefs had 310 offensive yards nullified by penalties, the second-highest figure in the league. Credit…Jamie Squire/Getty Images

Kidding aside, officials are generally too busy making split-second interpretations of the N.F.L.’s arcane rule book to keep track of whether the pass that tangled a defender with a receiver was thrown by a living legend or a mere mortal. Still, the Chiefs have earned a reputation as brilliant-but-scatterbrained students who lose points for forgetting to write their names atop their assignments, while Brady is so irreproachable that the teacher is more likely to believe him than the answer key.

Whether or not there’s a teensy bit of unconscious bias at play, each team’s penalty tendencies could create the perception of one-sided officiating, which could then overshadow the Super Bowl itself.

Spotty officiating has already become one of the major subplots of the 2020 postseason. The Buccaneers benefited from just one pass interference penalty in the playoffs, but it was a whopper: A fourth-quarter call on Green Bay Packers defender Kevin King against receiver Tyler Johnson in the N.F.C. championship game granted the Buccaneers a third-down conversion, allowing them to run out the clock. The call was appropriate — Johnson’s undershirt can clearly be seen stretching away from King’s grasp on replays — but officials in that game stopped just short of allowing defenders to take piggyback rides on receivers’ shoulders for the previous 58 minutes.

In the divisional round, the Chiefs benefited from an uncalled helmet-to-helmet hit that turned a possible Cleveland Browns touchdown into a fumble for a touchback. The no-call just happened to favor the more popular and marketable team.

The last thing the N.F.L. wants is a repeat of Super Bowl XL, in which the Pittsburgh Steelers defeated the Seattle Seahawks, 21-10, with the help of some famously dubious officiating, including a touchdown call for the Steelers after a run on which Ben Roethlisberger’s helmet (but no other part of his body, nor the football) crossed the plane of the goal line on a sneak. The call added to speculation that N.F.L. was eager to nudge the more popular team toward victory.

The Buccaneers are, of course, hosting Super Bowl LV, where the 25,000 socially distanced fans in attendance will probably skew toward the home team. And while the Chiefs have no shortage of star power, a seventh Brady championship sure would make a compelling climax to this pandemic-stricken season.

The N.F.L. does not fix its results, of course; if it did, the Jets would at least be competitive once in a while. The officials will by no means conspire to hand Super Bowl LV to Brady and the Buccaneers. But the season averages suggest that the Buccaneers could hold an edge of 40 to 50 yards on penalties, which would probably come in big chunks of pass interference calls and negated Chiefs touchdowns.

Should that happen, the conspiracy theorists will have plenty to talk about after the game.