WE all agree Suzuki knows a thing or two about making good small cars.

Think Ignis, Swift, Jimny, and so on.

Nani-mo-nai. Nothing. That’s why the hulking Across you see here is unashamedly a copy-and-paste Toyota RAV4.

Built by Toyota for Suzuki. Just like the new Suzuki Swace estate is a rebadged Toyota Corolla.

Rather than waste several years and many gazillions developing rival motors, the Japanese giants decided to play nicely together and share a few things.

Suzuki will build two small cars for Toyota in India, where Suzuki is king.

And when I say king, I mean K-I-N-G. Suzuki sells a staggering 1.7million cars a year in India — that’s more than the entire UK market last year. So Toyota wants a leg-up there.

Right, let’s get back on topic.

The Across is only available in one spec, and that’s a fully-loaded 4WD plug-in hybrid costing £45k. Which is a lot of money. Double the price of a Swift Sport.

But I liked it far more than I thought I would.

It’s smooth and spacious and easy-going with heated leather seats front and back and a 220v power socket in the boot. No more cries of “shotgun” from the kids.

Suzuki quotes a quite frankly ridiculous 282mpg for the petrol/electric combo. That’s a lab test. The real-world figure is closer to 50mpg, which is still very good for a car of this size. The official EV range — driving purely on electricity — is 46 miles.

Again, I managed 32 miles without waking the engine. Also very good. But if you’re a company car user, you’re quids in because CO2 emissions of just 22g/km mean you’ll pay only six per cent BiK. About £91 a month.

The Mitsubishi Outlander PHEV falls in the 12 per cent BiK band (£177 a month).

Line them all up for a drag race and the Across will win that too.

It’s quicker off the line than a Swift Sport. Other observations. Trail mode ensures the best possible grip in snotty conditions. Nice chunky switches for things that need switches. All sorts of anti-crash kit. But best of all is the “battery charger mode” which sees the engine fully charge the battery on the go.

Renault Clio has the winning formula as a mean, green hybrid E-Tech

IN FOR THE LONG HAUL

So if you haven’t got off-street parking for charging, it doesn’t matter. You can still glide through town with zero smog and maximum smug.

As for the RAV4 plug-in hybrid, that doesn’t hit showrooms until March — and it’ll costs more, starting at £47,395.

Not only is Toyota playing nicely, it has given Suzuki a headstart. 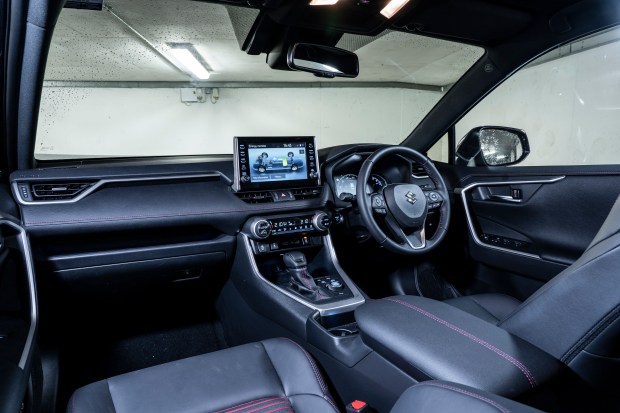