For the past several years, members of the food community and environmentalists alike have looked to kelp, a type of seaweed, as the shiny future of food.

For humans, kelp has high concentrations of potassium, magnesium, iodine and a bunch of vitamins. For Mother Earth, kelp doesn’t require irrigation, pesticides or fertilizer, like many land-based crops do.

“Kelp is a core part of the new climate cuisine,” said Bren Smith, 48, the founder of the nonprofit GreenWave, which promotes regenerative ocean farming, a type of farming that deliberately improves the health of the place being farmed. (And for chefs: It is an umami-heavy ingredient that is flexible in its culinary application.)

Sounds like a win-win, right? So why has kelp taken time to catch on within the American marketplace? 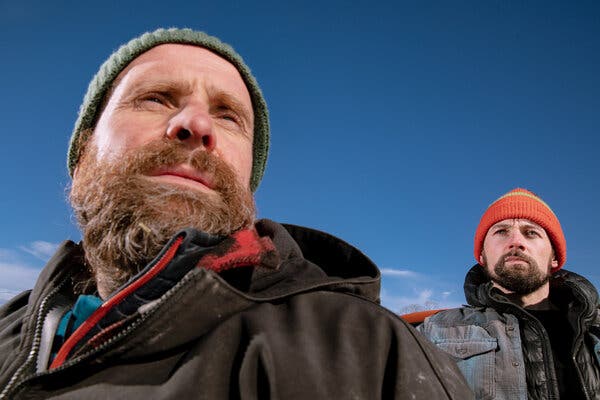 Bren Smith, the founder of GreenWave, and Casey Emmett, the C.E.O. of the Crop Project, in Branford, Conn.Credit…Amr Alfiky/The New York Times

Some are betting it will. Five years ago, Lia Heifetz, 30, founded Barnacle Foods with her partner Matt Kern, 34, in Juneau, Alaska. Capitalizing on a regional type of seaweed that has been eaten in Alaska for generations — bull kelp — the pair began to make salsa and pickles.

There’s also the newly founded Eat More Kelp, on eastern Long Island, which will be offering a community-supported kelp crop, not unlike a C.S.A. box. The company has introduced a line of clothing in partnership with Patagonia in order to drum up interest in the brand and the crop.

Bri Warner, 36, is the C.E.O. of Atlantic Sea Farms, a company in Saco, Maine, that grows kelp in conjunction with Maine farmers and processes it into edible products.

In the past year and a half, Ms. Warner said, Atlantic Sea Farms has been able to scale up production of kelp to a million pounds from 30,000 pounds. “And so when I hear things like, ‘Oh, the seaweed industry is not growing,’ I’m like, ‘Oh, really?” she said. Some of the company’s high-profile partnerships include Daily Harvest and Sweetgreen.

Markos Scheer, 52, the C.E.O. of Seagrove Kelp Co., plans to expand his Alaska kelp farm “as rapidly as the market will allow,” and currently has 700 acres of property in the application phase awaiting permitting, in addition to the 127 acres that are already fully operational.

“Everybody put the horse before the cart,” said Casey Emmett, 36, the C.E.O. of the Crop Project, a company that buys seaweed from farmers and then dries and mills it so that it can be used to make food, fertilizer and biomaterials, like plastic.

This year, he said, the Crop Project, in conjunction with GreenWave, was able to harvest 5,000 pounds of kelp during the peak months of the pandemic, which they dried in a tobacco barn.

Before the pandemic, Mr. Smith, of GreenWave, said that the intention had been to process the kelp in commercial kitchens. “We didn’t feel comfortable processing in close quarters,” he said. Instead, Mr. Smith found that Connecticut had almost 100 empty tobacco barns: “I never let a crisis go to waste.”

Now is the moment, Mr. Emmett said, when consumers are likely to see more kelp products in the United States, because of a more developed infrastructure: more kelp farmers on the water, more processing plants, and innovative approaches to drying and preparation (like the use of defunct tobacco barns).

The problem, Mr. Smith said, was that kelp requires significant infrastructure in order to get it ready for the market. The process of farming kelp, he said, takes place in three steps: a harvest, an initial process to “stabilize the kelp” and a secondary process to “get it in a form for consumers.”

Kelp must then be transported in its raw form to a processor within 12 hours of harvesting, then converted into something more stable: a dried, powdered, blanched or frozen ingredient. Finally, the stabilized kelp must change again, this time into something that consumers can eat. Mr. Smith used the example of taking powdered kelp and making it into burgers.

Mr. Smith and other longtime proponents of kelp hope that more infrastructure means that kelp might finally have its moment as a popular superfood.

More important, Mr. Smith noted, is that investing in kelp is an instrumental part of food sustainability initiatives. “It’s where the planet needs to go,” he said.