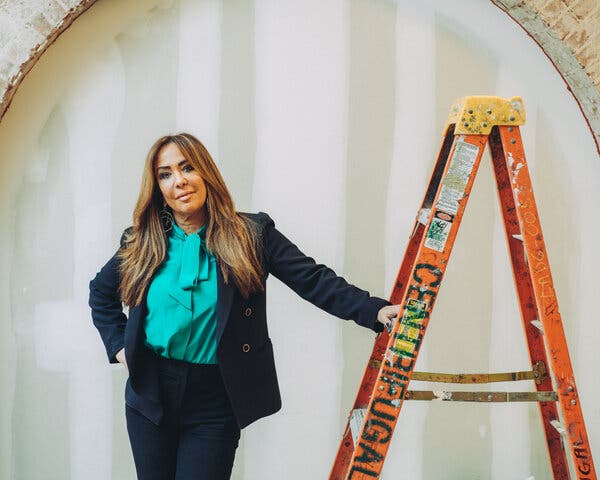 On Wednesday, another New Yorker hurled her hat into the mayor’s race ring, where it currently rests alongside the chapeaux of some 30 other individuals: Democratic candidate Barbara Kavovit. Like Maya Wiley, the former MSNBC analyst, and Andrew Yang, the former presidential candidate, Ms. Kavovit can claim some level of prior national TV exposure. Unlike Ms. Wiley and Mr. Yang, though, hers had no connection to politics, or even news: Ms. Kavovit has appeared (as herself) in several episodes of Bravo’s “The Real Housewives of New York City.” (Most notably, she was a regular on the show’s eleventh season.)

Ms. Kavovit, 55, currently lives on the Upper East Side of Manhattan with her son, Zachary Kavovit-Murphy, 23. Offscreen, she’s best known as the founder and C.E.O. of Evergreen Construction, a construction firm in midtown, and for creating tool kits designed for women. In a phone interview from her office, Ms. Kavovit said she waited to announce her candidacy until she “felt comfortable with my messaging” and “with the policies that were important to me.”

The interview has been edited for length and clarity.

How long have you lived in New York?

I was born and raised in the Bronx. And then I have lived in New York City since college. Close to 30 years, I guess.

Where did you go to school?

What is your life like in New York City now?

If people know you outside of the construction scene, it’s likely that they recognize you from the eleventh season of “The Real Housewives of New York.”

I like to think that they read my book too — that they’ve read my latest novel. But, yeah, I guess “The Housewives” is the first thing, right? They’ll scream at me on the street as I’m crossing Park Avenue.

Can you explain why you were a “friend of” as opposed to a full “Housewife” on your season?[A woman who appears in “The Real Housewives” but is not granted full cast member status may be designated a “friend of” the cast.]

Well, obviously, I came on as a “Housewife” of the show, and I went through the whole season as a “Housewife.” I was in all the confessionals, I went to the cast trip, and you only do that if you’re a “Housewife.” And then I think at the end, we realized that maybe I wasn’t the type of “Housewife” that maybe Bravo wanted.So I wasn’t willing to do some of the things that they wanted me to do. I’m a business owner. I take pride in going to work every day. It wasn’t my primary job, and for most people on that show, it is their primary job. So it felt unnatural for me. And I think both the producers and I came to an agreement that this was the best course.

Ms. Kavovit with her book at the East Hampton Library’s author’s night in 2019.Credit…Deidre Schoo for The New York Times

Do you think any of your conflicts with cast members on the show stemmed from political differences?

No. I mean, I don’t think anybody on the show probably has the same values as I do as far as policies go. I don’t know if anybody from the show are Democrats, that I was involved with on the season. I don’t think so. We never discussed politics.

I’m definitely more liberal. I’m more for the people. I’m really about making sure that the city, the underserved get served. We need a comprehensive plan to deal with social problems, homeless families, emotionally disturbed people, people who are on our streets. Really, what I see is not the New York I want to see. I’m not in my fancy townhouse. If I’m mayor, this is not the New York that will exist, I can tell you that.

Are you in an apartment building?

I’m in a non-fancy apartment building.

What percentage of 2020 did you spend in the city versus out of the city?

For the 30 percent, where were you?

Andrew Yang, who’s running, received backlash after he mentioned that he spent quite a bit of the pandemic outside the city. What is your response to people who criticize mayoral candidates who did not remain in the city for all of 2020?

It’s not that I did this as a new thing. I’ve had a house in the Hamptons for the past 20 years, and I’ve always spent 30 percent of my time there.

I don’t know what the reason was for Andrew Yang not being here, but if it has to do — maybe it’s children, or — but I did see something, I think, he had mentioned his children. I don’t have anything to say about him not being in the city. But what I can say is it’s nice of him to come back to run for mayor after trying to become president unsuccessfully. I mean, did he just come back to the city? I mean, I’ve been in the city for 30 years. I’ve built my business in the city. My son has grown up in the city. He’s gone to schools in the city. I was in the public school system growing up in the Bronx. I mean, I’m a born and bred New Yorker.

[Mr. Yang, who was born and raised in upstate New York, has lived in New York City for 24 years.]

What motivated you to run, and run now?

My question is, to you: Why shouldn’t I run? New York City’s a mess, and we need to save it. And the city needs someone who really understands it, and not what the politicians think the city is. I’m someone who grew up in the Bronx in a middle class family. I want the same opportunities that I had for other people. I want women to be able to move up the economic ladder. I want to be able to revitalize our neighborhoods. Most importantly, I want streets that are safe and clean. I want to be able to go on to the subway, and not worry if I’m going to get thrown into the tracks.

I’ve watched the city decline, and Covid has really pushed me over the edge. And it’s not because I’m enraged that people are getting Covid, which I am, but it’s the fact that the government in New York City hasn’t taken care of our people and the businesses that are here. It’s chaos. It’s crisis. Our city’s streets are overrun with trash, and homeless people who deserve better than to be on our streets. We are in financial trouble and the city is not managed properly. And you throw all that together, and you have a government that’s built on excuses by politicians.

There’s a lot of empty office space right now in New York City. What do you see as the future of those spaces?

People realized that they can work from home and they didn’t have to spend 100 percent of their time at the office to be efficient. So I think that people will realize that there are other ways to do business. I think that the city will come back bigger and better and stronger than ever. It is going to take some time. But I still think that there’s going to be a shift in who takes what office space.

And I think the crux of everything with going back to the office space is that people don’t want to be here because the fundamental part of New York City that makes the city run, and the foundation of the city, is the transportation system, which is 25 percent of what it could be right now. I have a whole crew of people that refuse to take the subways right now.

You mean they’re refusing because of Covid-19?

No, well, Covid has just put it over the edge. The transportation — subways are not safe. Every day, there’s somebody else that’s getting mugged, getting thrown onto the subway tracks. Or walking in the streets getting knocked on the head. I mean, people are legitimately afraid of walking the streets of New York City, I can’t tell you. All of my employees are. And I’m sitting in my office right now on 45th Street, and all of my employees are taking either Ubers or I’m paying for their garages. And these are people that live in the boroughs: Queens, Brooklyn, the Bronx, Staten Island. And it’s enraging. How does the government — the politicians that have been here for so long that have supposedly done such a good job — how are we in this type of trouble?

Another candidate, Dianne Morales, advocates cutting the NYPD budget. What are your thoughts?

I don’t think we should cut the budget of New York City’s police. I don’t believe that we should have less police on the streets. I think that we have to come to an equilibrium. And we have to stabilize New York City right now. So crime is up, murders are up, and we have a huge disparity between people wanting to have less police and more police. We can’t underprotect our population, we have to protect the people. So how do you do that, not demoralize the police, but make sure that people are safe and that the police do not harm anyone that they’re protecting?

We have to put in some type of stringent program into the police that will allow us to feel comfortable with who is in the police department. It’s like a pilot; you can’t have any accidents. You can’t have one officer that is going to hurt the public. So you have to make sure. And how do you do that? You have to put the right policies in place for that.

Who in your opinion, has been the best mayor of New York City?

I would have to say Bloomberg.

What did you like about the city under him?

And I think Giuliani, Rudy Giuliani at some point in his career as well. I thought the city was the best version of itself. I thought that it was the cleanest. I thought it was the safest. I could remember riding the subways at 2:00 in the morning and not feeling vulnerable. My business was thriving under Bloomberg; I know that there was some other — people had some pushback back then, but my business was thriving. I think the whole foundation of New York City is about clean, safe streets, and education. I believe all people need the same education.