WASHINGTON — J. Monroe Gamble IV was the first Black research assistant to work at the Federal Reserve Bank of San Francisco. He started in 2018.

That one data point speaks to a broader reality: Even as America’s central bank dedicates research and attention to racial economic outcomes and publicly champions inclusion, it has had a poor record of building a work force that looks like the population it is meant to serve.

Many parts of the Fed system, which includes the Federal Reserve Board in Washington and 12 regional banks, began to concentrate more intently on diversifying their heavily white economics staffs only within the last decade, prompted in part by the 2010 Dodd Frank Act, which pushed the board to hire more broadly. When it comes to employing Black economists in particular, the central bank still falls short.

Officials have often blamed the pipeline — Ph.D. economists are heavily white and Asian — but a New York Times analysis suggests the issue goes even beyond that. Black people are less represented within the Fed than in the field as a whole. Only two of the 417 economists, or 0.5 percent, on staff at the Fed’s board in Washington were Black, as of data the Fed provided last month. Black people make up 13 percent of America’s population and 3 to 4 percent of the U.S. citizens and permanent residents who graduate as Ph.D. economists each year.

Practices that favor job candidates with similar life experiences and those from elite economics programs, which are often heavily white, have sometimes prevented diverse hiring, current and former employees said. A brash culture can make some parts of the central bank unwelcoming, which can lower retention.

Across the board and the Fed system’s 12 regional banks, 1.3 percent of economists identified as Black alone. That aggregate figure masks wide variation. Five of the banks lacked a single economist who identified as only Black. People who identified as “two or more races” — of whom there were six in the Fed’s whole system — were not included in the count since their racial identity was not specified.

When it came to research assistants, an entry-level version of an economics job that generally requires a bachelor’s degree, 3.7 percent were Black — versus 5 percent of economics graduates. Just one of a dozen branch presidents is Black — Raphael Bostic in Atlanta — and none of the Fed’s six presidentially appointed governors are.

The Fed, which does not publish such granular data on diversity within its ranks but collated the numbers in response to more than a dozen New York Times requests, noted that the figures were voluntarily reported by employees and may be incomplete.

The picture that emerges is one in which Black Americans are lightly represented in the rooms where key policy choices are informed and made, even though perhaps no other racial group is so acutely affected by how successfully the Fed manages business cycles.

Black unemployment rises sharply during downturns, then falls more slowly in recoveries. The Fed has taken extraordinary actions to cushion the economic blow of a pandemic crisis that has hit communities of color hard. How those work, and when and how they are removed, will reverberate across the labor market and through the wealth distribution for years to come.

In recognition of that, the Fed has increasingly focused on disparate racial outcomes — even holding a “racism and the economy” conference series this year — and has worked on its hiring processes to try to improve internal diversity. 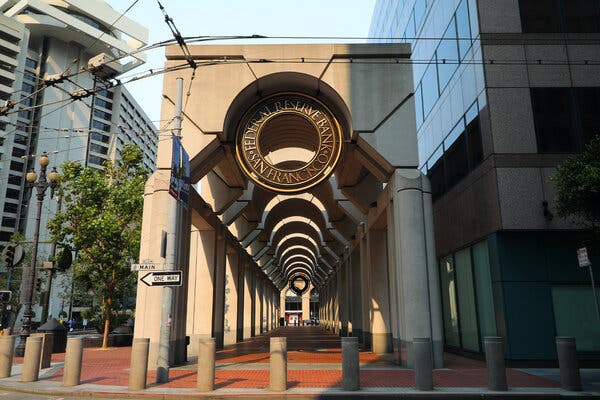 Calls to speed that process up could be imminent. Since at least the early 1990s, members of Congress have pushed the central bank to hire a staff that looks more like America. More recently, President Biden pledged to push the Fed to diversify as part of his campaign platform. He also suggested changing the Federal Reserve Act so that policymakers focus more on gaps in racial economic outcomes including wages, jobs and wealth.

It remains to be seen whether those positions make it into policy, but Mr. Biden has hired broadly for top administration roles, including tapping Cecilia Rouse, a Black economist, as chair of the Council of Economic Advisers. None of the top Fed posts in Washington that are appointed by the president have been filled yet — only one is vacant — but diversity is likely to be a consideration.

At a staff level, change will require a more systemic effort. Mr. Gamble, who goes by Monroe and is in his 20s, has a story that bears on that challenge in hopeful and cautionary ways.

His family was not affluent while he was growing up in Kansas City, Mo., but lived in a heavily white school district that had more resources than others in the area, which he counts as an early advantage.

Mr. Gamble started at Virginia Tech on a full scholarship, but health issues prompted him to drop out of that program — then another one. For a time he found himself homeless, sleeping on friends’ couches and floors. He worked three jobs at once to support himself, unloading trucks at a sporting goods store, selling men’s suits in the afternoon and working in a pizza shop at night.

He kept his dream of graduating alive. It took him seven years, several colleges and five attempts at multivariate calculus — which he found high school had left him underprepared for — but he finished in 2017 with a degree in business, emphasis on economics, and a minor in mathematics from the University of Missouri.

Every story is unique, but Mr. Gamble’s is in line with that of many other young Black men: For the group of students who entered college in 2010, government data show that just 34 percent of Black men graduated within six years, compared with 57 percent of men overall.

“They’re struggling with their responsibility to be a gatekeeper to economics,” Mr. Gamble said, referring to the fact that Fed assistantships are often a critical step for recent graduates.Credit…Christopher Smith for The New York Times

Such résumés can be a kiss of death in a field like economics, where every summer internship and transcript grade dictates future opportunities.

But Mr. Gamble left college with a plan. He had discovered his interest in economics partway through university, when he found an old textbook in a public library and read it cover to cover, soaking in the descriptive logic — only to realize a Black man had written the text. It inspired him.

He dedicated his undergraduate summers to working on research projects with college professors and attending programs meant to help students from less-privileged backgroundsget on track to a doctorate, assembling a who’s who list of academic economists as recommenders.

He felt out of place at the central bank branch and struggled to find meaningful work. He began asking around and learned that he was the first Black person ever to hold a research assistant job. Within months, he was looking to leave.

Then Mary C. Daly, who was the recently promoted president of the reserve bank, had lunch with him.

She, too, had an underdog background. She had dropped out of high school and passed a high school equivalency exam, and had attended a University of Missouri branch. She persuaded Mr. Gamble not to give up on the job just yet, urging him to give her six months and promising to help him find something new if he still wanted to leave at that point. He stuck it out — for six months, then for a year.

Eventually, he was promoted to be Ms. Daly’s personal research assistant.

Even as his own experience improved, Mr. Gamble became troubled by bank hiring practices. Research assistants helped to hire the next classes of R.A.s. He suspected it might be the case that screeners simply did not find Black candidates relatable and ruled them out early on.

“They’re going to pick people who are like them,” he said.

He pushed for changes, and San Francisco listened. Application readers began to talk through what would make a good candidate before the hiring process began, and discussed why they assigned job candidates the scores they did.

“They’re struggling with their responsibility to be a gatekeeper to economics,” Mr. Gamble said, referring to the fact that Fed assistantships are often a critical step for recent graduates hoping to get into doctorate programs.

Ms. Daly said Mr. Gamble had made a “material change” at her Fed. And improving is a priority because, as she puts it, “policymaking reflects those around the table.”

Mr. Gamble is now in a predoctoral program at New York University. Mentors who helped him along the way, including Lisa Cook at Michigan State University, Ms. Daly at the Fed and now Peter Blair Henry — a leading Black economist whom he is working with at N.Y.U. — were critical links in the chain that is leading him to a Ph.D.

His story suggests that diversifying is a matter of tearing down structural barriers that have long shut out talented people of color and offering support and inclusion once they arrive.

Fed officials in Washington said they were trying to better serve those goals. The board in 2018 hired Quentin Johnson as its first diversity outreach manager, and he is deepening the system’s relationships with a broad set of schools, including historically Black colleges and universities. Recruiting practices are becoming standardized to correct for hidden biases, the officials said.

Whether the effort sticks is the question. Fed jobs should be open “to all competent Americans,” Henry Gonzalez, a Democratic congressman from Texas, once told the Fed chair at the time, Alan Greenspan. Mr. Greenspan assured lawmakers the Fed was working toward diversity.