Just like any first lady stepping into the White House before her, Dr. Jill Biden’s Inauguration Day outfit was bound to draw attention.

Guesses were made about which American designer she would choose: Brandon Maxwell or Christian Siriano, whose dresses she had chosen for the Democratic National Convention? Tory Burch? Oscar de la Renta?

Few — or none, perhaps — would have predicted that Dr. Biden would walk out into the cold Washington morning on Wednesday in a matching blue coat and dress by Markarian, a small New York City brand whose typical aesthetic signatures include feather trims and full-body sequins. Here’s why:

Alexandra O’Neill working on Dr. Biden’s dress.
A sketch of the full ensemble proposed by the designer.

But much of Markarian’s business is designing custom pieces for special events and weddings. The line is carried at Bergdorf Goodman and on Moda Operandi, among other retailers. Most ready-to-wear dresses are priced between $1,000 and $4,000.

Ms. O’Neill, who has said she produces everything in New York City, often describes her work as romantic and ethereal. Before starting Markarian, she founded the label Porter Grey, with her sister Kristen, while she was still in college. That brand also had famous fans, like Blake Lively and Jessica Biel.

Why does it matter?

In choosing Markarian, a relatively unknown-outside-fashion brand, for this high exposure moment, Dr. Biden is drawing an unrivaled amount of attention to a young designer.

It’s not the first time this has happened. In 2009, when Mrs. Obama wore an inaugural gown from Jason Wu (to his surprise), it was a career-making moment for the then emerging designer. That was during the Great Recession; 12 years later, the country is again facing financial crisis, and it is again a precarious time to be an independent designer.

In a phone interview on Wednesday (conducted at the very moment the Bidens walked onto the inaugural platform), an “excited and humbled” Ms. O’Neill, 34, said that Dr. Biden “recognizes the impact that a choice like this can have on an emerging designer.” 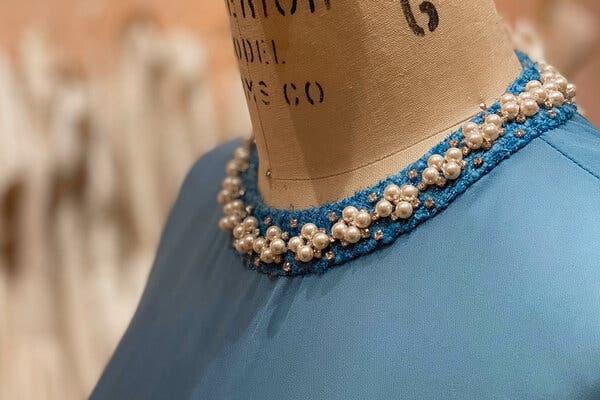 The neckline was embellished with Swarovski pearls and crystals.

How was Markarian selected?

In December, Ms. O’Neill was approached by a stylist for Dr. Biden, who asked for concepts and sketches for “something classic and something feminine for Dr. Biden, but something that was special and appropriate for this momentous day,” Ms. O’Neill said. “They were really open to any ideas that we had.”

But she also knew that Dr. Biden’s team was commissioning looks from multiple designers. She didn’t know her ensemble — mostly wool tweed, but accented and embellished with velvet, chiffon, crystals and pearls — had been selected until this morning, when Dr. Biden was seen leaving her home for the traditional inauguration morning church service.

What about that shade of blue?

Blue is not a surprising choice for the wife of a Democratic president. But there are hundreds of shades of blue. Mrs. Trump’s matching set on Inauguration Day in 2013, for example, was a very different kind of blue — a Jacqueline Kennedy-channeling powder blue

When Ms. O’Neill came across the base fabric for this dress, a rich (and sparkling) teal tweed, she thought it stood for “trust and loyalty.”

“That was important for us, to get that information across,” she said.