In a season dominated by the N.F.L.’s efforts to play a full schedule during a pandemic, many other health issues have been overshadowed, particularly concussions, an issue that has dogged the league in years past.

The topic returned to the forefront over the weekend when two of the league’s best players — the winners of the last two Most Valuable Player Awards, no less — were knocked out of their divisional round playoff games with concussions. The N.F.L. received kudos for following its own player safety rules, which were developed after years of criticism that not enough was being done to prevent head hits.

Yet as is so often the case, hits to the head that were not penalized garnered just as much as attention. They suggest the league is far from eliminating the helmet-to-helmet hits that have led to so many concussions.

Most spectators, though, are more likely to remember the instances when star players leave games and don’t return, mostly because of their impact on the team’s chances of winning and because they are the reason fans watch the games in the first place.

The first star player knocked out of a game came on Saturday in Buffalo when Baltimore Ravens quarterback Lamar Jackson slammed his head on the turf after he was thrown to the ground by two Bills defenders. Jackson grabbed his helmet and lay on his back as trainers rushed out to examine him. He was taken to the clubhouse for examination and did not return.

On Sunday, Kansas City Chiefs quarterback Patrick Mahomes had his neck twisted by a Cleveland Browns defender as he was dragged to the ground. Mahomes wobbled as he stood up, and two teammates had to hold him upright until trainers could walk him off the field. Mahomes, too, was taken to the clubhouse and ruled out of the game.

While fans of the Ravens and the Chiefs would vigorously disagree, others — especially the critics of the league who have long accused it of turning a blind eye to head injuries — might consider Jackson and Mahomes’s removal a welcome sight.

“The handling of Lamar Jackson’s and Patrick Mahomes’s concussions shows progress,” Chris Nowinski, chief executive of the Concussion Legacy Foundation, wrote on Twitter. “15 years ago: They may not miss a play. 10 years ago: Smelling salts on the bench & return. 5 years ago: 4th quarter comeback. Today: 2 top QB’s treated responsibly.”

Indeed, the N.F.L. has focused more on head hits in recent years. The league has strengthened rules against hitting quarterbacks and players who lower their helmets to initiate contact. There were 125 roughing-the-passer penalties called this season, a 40 percent jump compared to 2016, according to the N.F.L. Penalties website, which tracks infractions. This season, there were 37 fouls called for illegal use of the helmet, one more than in 2019, the N.F.L. said.

There were 224 reported concussions last season, a decline of 4.7 percent compared to 2018. The league has not yet reported complete concussion figures for this season, but they are likely to decline again because there were no preseason games and many teams canceled some practices to try to limit the spread of the coronavirus. 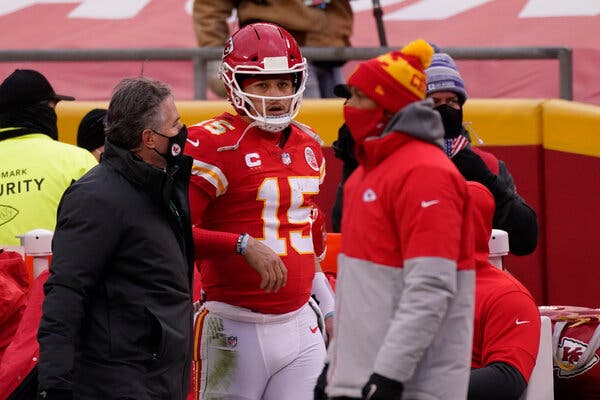 Chiefs quarterback Patrick Mahomes was helped off the field after being taken down in the second half on Sunday against the Cleveland Browns.Credit…Charlie Riedel/Associated Press

Many concussions, though, go unreported, either because doctors and neurologists at the game failed to spot them or because the players masked their symptoms.

Then there are the cases in which players smack helmets, no penalty flag is thrown, and no doctors intervene. That’s what happened late in the first half of the Chiefs-Browns matchup. Cleveland quarterback Baker Mayfield threw a long pass to receiver Rashard Higgins, who ran a few strides and dived for the pylon on the goal line. Just as his outstretched arms and the ball were about to reach the goal line, Chiefs safety Daniel Sorenson launched himself at Higgins.

Replays showed Sorenson lowered his helmet and crashed it into Higgins’s head. Higgins fumbled the ball out of bounds in the end zone, a touchback, ending the Browns’ chance for a touchdown and giving possession to the Chiefs at their 20-yard line.

Sorenson was not penalized for leading with his helmet, and the Browns were unable to challenge the play because helmet-to-helmet hits are not reviewable. But the noncall, and others like it, did not escape notice by football insiders.

“The number of ‘player safety’ penalties not being called by @NFL officials this entire weekend is concerning & unsettling,” Scott Pioli, a former director of player personnel for the New England Patriots and an analyst for CBS and NFL Network, wrote on Twitter. “A LOT of leading with head penalties not being called on defenders AND ballcarriers all weekend. Why have we abandoned the rules for the playoffs?”

With the Chiefs advancing to the A.F.C. championship game, Mahomes’s recovery will remain a topic of interest. After Sunday’s game, Coach Andy Reid said his quarterback “got hit in the back of the head and kinda knocked the wind out of him and everything else with it.” But he added that Mahomes was “doing great” and passed some tests, without specifying what they were.

According to N.F.L. guidelines, Mahomes must rest until his symptoms are gone and his performance on neurological exams returns to normal. He can then gradually increase the amount of exercise and stretching. Assuming he has no setbacks, Mahomes can then resume some activities, including strength training. That would lead to noncontact football activities like throwing and running. If all those hurdles are passed, he could be cleared by an independent neurologist to participate in the next practice or game.

Players, though, can pass these tests and not report lingering symptoms, like memory loss or headaches. “It’s tough as a player to know what to report,” Nowinski said.

In the past five seasons, the median number of days it took a quarterback to return from a concussion was seven. With that in mind, Mahomes could be back on the field when the Chiefs play the Bills on Sunday.