Home teams won the first three games of the N.F.L.’s divisional round, but there was plenty of fretting along the way. The Buffalo Bills rode their defense to a win, the Green Bay Packers relied on their offense and the heavily favored Kansas City Chiefs, who lost quarterback Patrick Mahomes to a concussion, mostly survived.

Here’s what we learned: 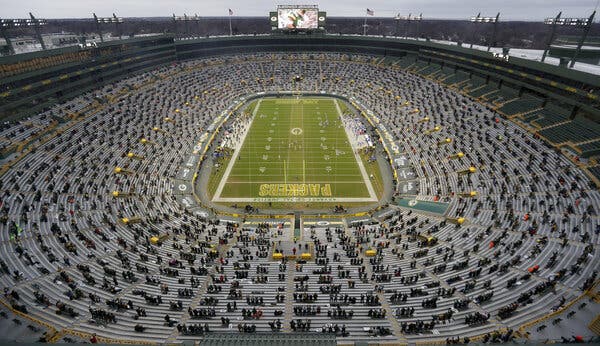 A crowd of 8,456 fans was spread out in the stands of Green Bay’s Lambeau Field on Saturday. The team had not allowed fans to attend games during the regular season.Credit…Sarah Kloepping/USA Today Sports, via Reuters

Baker Mayfield of the Cleveland Browns was forced to watch from the sidelines as the Kansas City Chiefs successfully ran the clock out in their divisional round game. Cleveland had wasted two timeouts earlier in the second half.Credit…Jeff Roberson/Associated Press
Slowed by a rib injury, Aaron Donald of the Rams, right, couldn’t find his typical burst. That gave Aaron Rodgers of the Packers plenty of time to pick apart the Los Angeles defense.Credit…Matt Ludtke/Associated Press
Justin Tucker missed two field goal attempts of less than 50 yards in Saturday’s loss to Buffalo. In nine seasons for Baltimore, and two college seasons at Texas, the steady kicker had never missed two such kicks in a game.Credit…John Munson/Associated Press
Related Topics:DonaldGameHadOnePlay