The Super Bowl matchup is set. The Tampa Bay Buccaneers, who came into the playoffs as the fifth seed in the N.F.C., will host the defending champion Kansas City Chiefs on Feb. 7 at Raymond James Stadium in Tampa, Fla. For Tom Brady, it is a chance at a seventh Super Bowl win. For Patrick Mahomes, it is an opportunity to be the first quarterback to win back-to-back titles — since Brady.

Here’s what we learned: 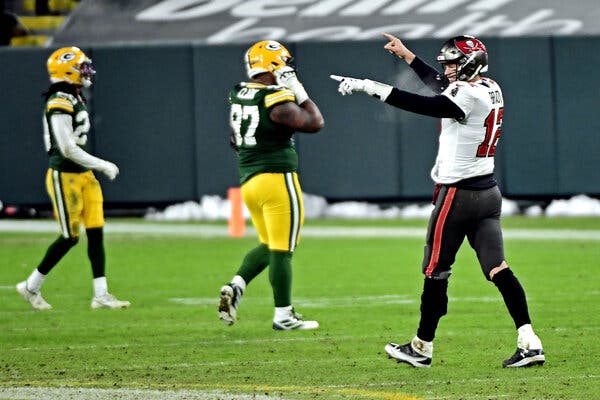 Tom Brady was a question mark coming into this season. Now he is headed to the 10th Super Bowl of his career.Credit…Benny Sieu/USA Today Sports, via Reuters

Before Tampa Bay, no team came closer to playing a Super Bowl at home than the 1979 Los Angeles Rams, who traveled around 14 miles to play at the Rose Bowl in Pasadena, Calif. Jack Lambert, middle, and the Pittsburgh Steelers spoiled the Rams’ fun. Credit…Associated Press
Travis Kelce was absolutely dominant for Kansas City on Sunday, scoring two touchdowns and tying the record for receptions by a tight end in a playoff game.Credit…Denny Medley/USA Today Sports, via Reuters

Rather than let Aaron Rodgers try to tie the game with a touchdown on a fourth-and-goal play late in the game, Green Bay kicked a field goal. Rodgers watched from the sidelines as Tampa Bay ran out the clock.Credit…Morry Gash/Associated Press
Stefon Diggs of the Bills struggled for much of the game, with Kansas City utilizing far more press coverage against him than teams did during the regular season.Credit…Reed Hoffmann/Associated Press
Related Topics:GameHomePlayRodgersSuper Bowl