The Super Bowl is unlike any other American sporting event: A football game provides the anchor for parties, fanfare, and an eye-popping TV broadcast where the commercials and halftime show are just as much of an attraction for the more than 100 million fans who will watch.

But like everything else in the year since the coronavirus pandemic swept the globe, Super Bowl LV in Tampa, Fla., has been adapted to Covid-19 health guidelines and scaled down, despite the excitement over the Tampa Bay Buccaneers becoming the first N.F.L. team to play in the championship game in its home venue — Raymond James Stadium.

While the football being played on Sunday will look largely the same as in other years, nearly everything else surrounding the Super Bowl will be different.

Players are being tested even more.

Players, coaches and members of each team’s staff have been tested for Covid-19 daily throughout the season, including on game days. Since the Buccaneers and the Chiefs qualified for the Super Bowl on Jan. 24, team personnel have been tested for coronavirus twice daily.

Anyone with a confirmed positive test must stay away from their team for a minimum of 10 days. The Buccaneers and the Chiefs have not had a positive test in more than three weeks.

Because of concerns about exposure to the coronavirus, the Buccaneers and Chiefs have departed from the normal Super Bowl itinerary. In most years, the two opposing teams would arrive in the Super Bowl city one week in advance of the game to conduct practices and scheduled interviews with media. This year, players and coaches will do those interviews via videoconferences, as was the case throughout the 2020 regular season.

To further reduce the team’s chance of infection, the Chiefs are not scheduled to arrive in Tampa until Saturday. The Buccaneers won’t have to drive far.

Fewer fans will attend the game.

Super Bowls typically sell out their seating capacity, even for tickets that cost $10,000 or more. Attendance has never dipped below the 61,946 who attended Super Bowl I in Los Angeles in 1967 and has in some years topped 100,000.

This year, the N.F.L. will host fewer than 25,000 fans, a record low for a Super Bowl and less than half the capacity of Raymond James Stadium. The league has given 7,500 tickets to vaccinated health care workers. Another 14,500 seats will be sold to fans who won’t be required to be inoculated or tested before entering the stadium, and another 2,700 fans will sit in luxury boxes. Every fan attending the game will receive a kit that includes personal protective equipment, including a KN95 mask and hand sanitizer. 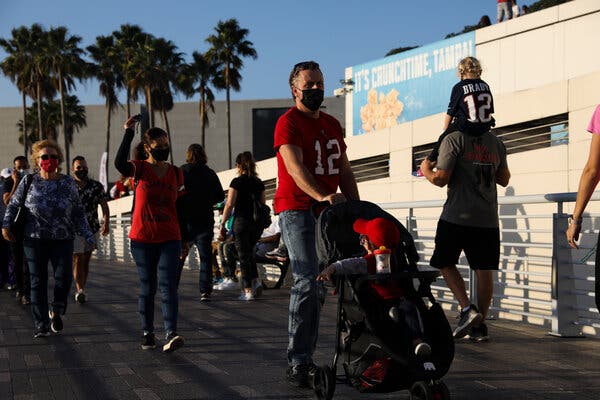 Football fans wore protctive facemasks as they visited the Tampa Riverwalk ahead of the Super Bowl.Credit…Eve Edelheit for The New York Times

The Weeknd’s halftime show will be socially distanced.

The halftime musical act, The Weeknd, will perform at halftime, one of the biggest platforms for any artist. The N.F.L. has substantially reduced the number of people allowed on the field for games this season to reduce the risk of exposure to the coronavirus, so it is unlikely that hundreds of fans will be allowed to dance in front of a stage, as has been the case in recent years.

But The Weeknd, whose name is Abel Tesfaye, has said he plans to spend $7 million of his own money to enhance the experience for the TV audience. He is the first Black performer to headline the halftime show since late 2019 when the league entered into a partnership with Roc Nation, Jay-Z’s entertainment and sports company, to curate the performance. Earlier that year, many artists snubbed the N.F.L.’s request in solidarity with Colin Kaepernick.

TV commercials will be toned down.

Television commercials during the Super Bowl can often attract more attention than the game itself. This year, some of the broadcast’s biggest sponsors, like Coca-Cola and Hyundai, have decided not to spend millions of dollars for 30-second spots.

Younger companies like Uber Eats, DoorDash and Vroom, which have grown during the pandemic, will still be vying for attention, though.

Parties will be scaled back, some with virtual guests.

The Super Bowl’s typically glitzy parties — including the annual event hosted by Commissioner Roger Goodell, where team owners, network executives and friends of the N.F.L. hobnob — are not being held this year now that most bigwigs are planning to stay home.

The N.F.L. will host its annual pregame tailgate party, which this year will be broadcast on TikTok and include a performance by Miley Cyrus. The event usually attracts 10,000 fans who attend in person. In their stead, 7,500 vaccinated health care workers will be allowed at the show.