There are few things more perfect than a Sunday afternoon in Cooperstown, N.Y., as the newest class of the Baseball Hall of Fame takes turns speaking in front of their fellow Hall of Famers and an enormous crowd of fans, any of whom are free to simply walk up on the day of the event. There is usually plenty of room to spare.

But this year, just as in 2013, none of the 25 finalists appeared on the required 75 percent of the ballots of the eligible voters from the Baseball Writers Association of America. It was the ninth time that no players have gained election through the annual writers’ vote, and with the Hall’s Eras Committee having delayed its vote because of the pandemic, it ensures that no players will be elected at all this year.

No Barry Bonds. No Roger Clemens. No Curt Schilling.

The good news for fans is that the Hall of Fame plans to hold an induction ceremony on July 25 for the Class of 2020, who had their ceremony canceled last summer. And the good news for the players who were snubbed on this year’s ballot is that history suggests quite a few of them will eventually become Hall of Famers.

Looking back, the coverage in The Times for years in which no players were elected varied quite a bit. 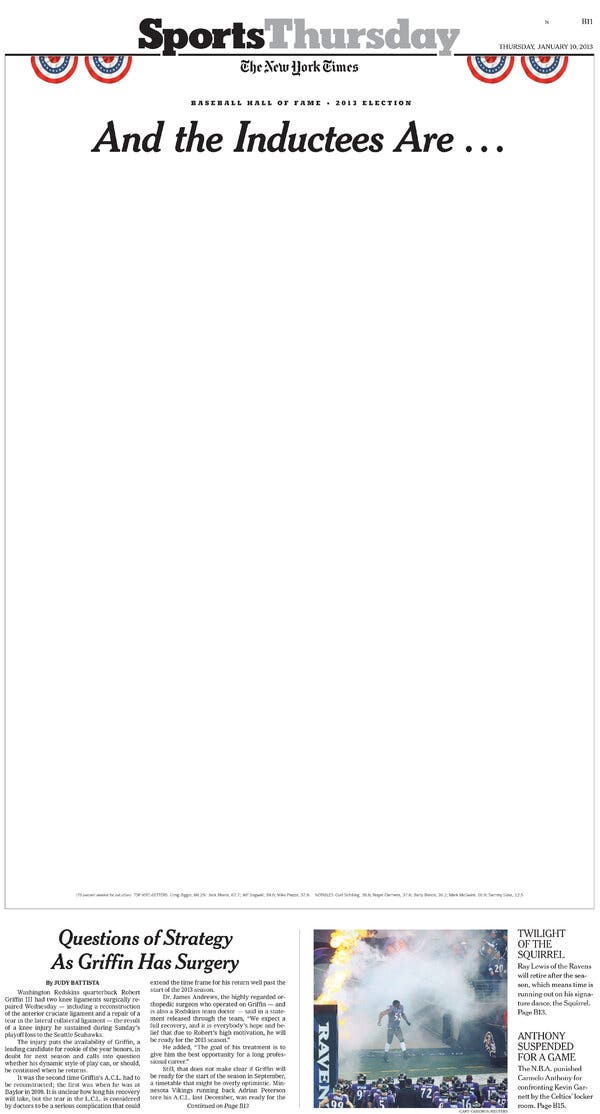 To commemorate the 2013 Baseball Hall of Fame election results, in which no players were elected, The Times rank a blank centerpiece in the sports section.Credit…The New York Times

There was precedent for the writers’ failing to reach 75 percent on a candidate, but 2013 was different because the choice to snub players like Clemens and Bonds was seen less as a ruling on their merits and more as a protest to punish players connected to performance-enhancing drugs. In a Twitter post that has since been deleted, Clemens said “after what has been written and said over the last few years I’m not overly surprised.”

Quotable: “It takes time for history to sort itself out,” said Jeff Idelson, the Hall of Fame’s president at the time. “I’m not surprised we had a shutout today. I wish we had an electee, but I’m not surprised given how volatile this era has been.”

Phil Niekro and others not being elected to the Hall of Fame in 1996 was big news in the sports section. But not as big as a blizzard that forced hockey and basketball games to be delayed.Credit…The New York Times

It had been more than 20 years since the writers failed to agree on a Hall of Famer when the Class of 1996 was met with a shrug. Seven of the 35 players who were considered eventually were elected to the Hall, either by the writers or by a committee. The knuckleballer Phil Niekro, that year’s top vote-getter at 68.3 percent, was not overly concerned. “I’m fine,” he told Claire Smith of The Times. “I don’t really even think about it that much because I don’t know what to think, do you?”

Quotable: “The absence of an electee this year emphasizes the exclusivity of membership in the Baseball Hall of Fame,” said Donald C. Marr, the Hall of Fame’s president at the time. “Of the more than 14,000 who have played the game on a major league level, only 172 are represented in Cooperstown by bronze plaques — a little over 1 percent.”

If Yogi Berra were to be placed on the ballot in the current era, his election most likely would be unanimous. A winner of 10 World Series rings and three Most Valuable Player awards, Berra was also one of the most popular players in the game. But Berra was aware that only four first-time finalists (Ted Williams, Stan Musial, Jackie Robinson and Bob Feller) had been elected to that point, and he also knew that many writers of the day felt it was improper to vote for a player on his first try. “Maybe next year,” Berra said. “Sure I’m disappointed, even though I didn’t really think I’d make it on the first try.”

Commissioner Bowie Kuhn tried to spin the news, saying: “I have an instinct to be disappointed. But I feel that at least the integrity of the system has been demonstrated.”

Quotable: “It’s a shame they didn’t put somebody in,” said Early Wynn, the longtime pitcher for the Cleveland Indians who received 66.7 percent of the vote in his third time on the ballot. “I can’t tell you how I really feel. The language would be too embarrassing.”

The writers were unable to agree on a candidate in 1958 and 1960. There was no election in 1959.Credit…The New York Times

The writers failed to reach consensus in 1958 and 1960, and did not vote at all in 1959, creating a three-year stretch without a new inductee by the writers. While Spahn’s name sticks out as a notable snub in 1958, he was still an active player for the Milwaukee Braves, so all but one voter ignored him. Of the lack of inductees in 1958, Commissioner Ford Frick said he was “rather pleased no one was elected.” The writers must have been as well, since no player reached even 60 percent in 1960. Of the 134 players considered in 1960, 40 were eventually inducted either by the writers or by a committee.

Quotable: “I think this will give more prestige to those already in the Hall,” Frick said of the 1958 election.

Mel Ott was a hometown star, but the writers’ failure to elect him in 1950 was mid-page news in The Times.Credit…The New York Times

Mel Ott of the New York Giants and Jimmie Foxx of the Philadelphia Athletics and the Boston Red Sox aren’t just Hall of Famers, they are top-tier Hall of Famers. But the voters in 1950 didn’t think so. Ott received 68.5 percent of the vote in his second time on the ballot and Foxx received 61.3 percent in his sixth try. This despite the fact that baseball’s 500-homer club at that point was just Babe Ruth with 714, Foxx with 534 and Ott with 511.

The Hall of Fame began electing players in 1936. Despite a backlog of stars to consider, the writers failed to elect anyone in 1945 or 1946.Credit…The New York Times

Frequently referred to as the “Peerless Leader” of the Chicago Cubs, Frank Chance fell seven votes short of election in 1945. In 1946, the writers conducted the election in two parts, with Chance receiving 71.3 percent of the nominating vote but just 57 percent in the final tally.

Fortunately for Chance, the Old-Timers committee met three months later and they were far more kind. They not only elected Chance — essentially overruling the writers — but approved his teammates Joe Tinker and Johnny Evers as well, honoring all three players from the famous poem “Baseball’s Sad Lexicon.” The Old-Timers committee was extremely generous that year even beyond the Cubs. They elected 11 people to the Hall, including Tommy McCarthy, who is often cited as one of the least accomplished players to gain enshrinement.