President Biden moved into the White House this week, replacing a leader whose constant need to command attention left millions of American exhausted by the nonstop spectacle and facing a seemingly unparalleled set of challenges.

But a decade ago and 3,000 miles away, there actually was something of an analog: another septuagenarian career politician and elder statesman swept back into high office after the tumultuous tenure of a political outsider. It was Jerry Brown, and his second act as California governor, in which he promised a return to stability after Arnold Schwarzenegger, offers a road map for Mr. Biden.

“I’ve been around as long as Joe Biden,” Mr. Brown, now 82, said in an interview this week. “Somewhere it dawns on a politician. Tenth year? Twentieth year? Thirtieth year? Certainly by the 40th year in politics.”

He was talking about the need to selectively make public pronouncements — the strategy of say less, be heard more that he deployed to great effect in the sunset years of his career, one that the famously philosophizing former governor believes would serve Mr. Biden well now.

“The essence of any kind of creation is there are limits, and you have to understand the limits,” Mr. Brown said. “You need content, but you need shape. You don’t want shapelessness. Episodic fragmentary buzz bits of public presentation — that’s not leadership.”

Few figures in American politics have the durability and longevity to match Mr. Brown, who first won statewide office in 1970, or Mr. Biden, who won his Senate seat in 1972. Mr. Brown was both California’s oldest governor and its youngest one in modern times; Mr. Biden is the oldest American president and was one of the youngest senators ever to serve.

And voters returned both men to executive office, in 2011 and 2021, at perilous and precarious moments.

For Mr. Brown, it was a budget crisis so crippling that California had resorted to issuing i.o.u.s to stay solvent. The state’s acclaimed historian Kevin Starr lamented that it was at risk of becoming the nation’s “first failed state.”

For Mr. Biden, it is a coronavirus pandemic that has cost 400,000 lives in the United States, precipitated an economic and joblessness crisis and exacerbated and exposed racial and social inequities. He also inherits a nation so ideologically split that supporters of former President Donald J. Trump laid siege to the Capitol building in a violent riot this month.

Then and now, voters were weary and worn down.

“There is a real parallel,” said Steve Glazer, Mr. Brown’s 2010 campaign manager and a senior political adviser early in his governorship. “Arnold was in front of the camera all the time — and Trump with his tweeting.”

So when Mr. Brown took over, he kept a relatively limited public presence early on. The few pronouncements he did make — banning government-produced swag, curbing state cellphone use, limiting taxpayer-funded cars — were more symbolic than fiscally significant. They aimed to build back trust that government could work.

“You can’t project leadership with a smorgasbord dinner,” Mr. Brown said. “You’ve got to have focus.” 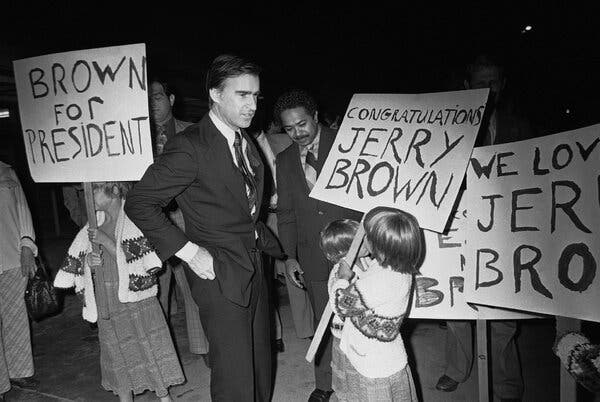 Mr. Brown was California’s youngest governor in the modern era when he was first elected. He campaigned multiple times for president but never won the Democratic nomination.Credit…Walter Zeboski/Associated Press

Mr. Biden had already embraced restraint as a political tactic throughout much of 2020. He adhered to a limited schedule for months amid intense second-guessing by fellow Democrats about his lie-low strategy during the pandemic. And even once he returned to the trail after Labor Day, Mr. Biden was happy to let the self-sabotaging Mr. Trump drive down his approval ratings by hogging the spotlight.

Mr. Brown had faced his own Democratic hand-wringing in the 2010 race. He let Meg Whitman, his billionaire Republican rival, air millions of dollars of unanswered television ads that summer, only to emerge that fall, quite counterintuitively, as a fresh face for voters sick of the deluge.

“He didn’t have the millennial-ish urge to have everyone watch his every breath and every motion,” said Ace Smith, a longtime political adviser to Mr. Brown who has also worked with Vice President Kamala Harris, until recently a senator from California. “It was refreshing in California, and it’s going to be incredibly refreshing for a fully exhausted country.”

Despite their decades of overlap, they are not particularly close, having worked on different coasts and in different institutions. “Fine,” Mr. Brown said in summing up their relationship. “I get along with him fine.” They have combined to make six runs for president — covering half of the presidential elections since 1976 — yet never once overlapped with each other as rivals.

Since the November election, Mr. Brown has connected with Ms. Harris, but not with Mr. Biden. In a twist, Mr. Biden did recently speak with Mr. Schwarzenegger, who has emerged as a withering Republican critic of Mr. Trump and whose recent video denouncing him and the Capitol mob was viewed more than 38 million times on Twitter.

“They’re not waiting for my disquisition on the state of the world,” Mr. Brown said with self-aware earnestness. (Still, he did recently send Mr. Biden a public letter about the urgency of prioritizing nuclear disarmament talks with Russia; Mr. Brown serves as executive chair of the Bulletin of the Atomic Scientists, best known as the operators of the Doomsday Clock.)

In Sacramento, Mr. Brown earned a reputation for his willingness to deny the Democratic-controlled state Legislature’s most progressive wishes — a moderating role that Mr. Biden has been cast to play in the next two years given Democratic control of Congress.

But Mr. Brown warned that Mr. Biden should not shy away from big goals, especially on climate change and the economy. He called for a “Rooseveltian” level of public investment and suggested that aiming too low would pose a far graver risk than aiming too high.

“It’s awfully hard when you only have 50 votes to have much overreach,” he said of the evenly split Senate. “I think underreach is a greater challenge.”

If that sounds like something of a surprise coming from a governor who defined his tenure with austerity gestures, Mr. Glazer said it shouldn’t, because the two courses of action are flip sides of the same coin: building back public trust.

“It’s not a right-left issue of spending versus frugality,” Mr. Glazer said. “It’s creating that bond of focus.”

Perhaps the clearest lesson of Mr. Brown’s second tenure as governor, which was not without its blemishes, is that successfully steering the government toward competence can create its own political momentum. After two years of budgetary austerity, he championed a tax increase that voters approved.

He left office in 2019 with a huge surplus and a rainy-day fund — a full inversion of the crisis he inherited.

In the White House, the Biden team is well aware that no volume of public speeches or news releases will prove a substitute in the long run for accelerating coronavirus vaccination rates or reducing unemployment.

By the end of the wide-ranging interview, it sounded as if Mr. Brown was zeroing in on his own defining theme for the task ahead for the Biden administration. “We got some big changes to be made,” he said, “but they’re all in the direction of stability.”

“Stability and civility,” Mr. Brown declared with an almost palpable sense of satisfaction. “That would be good.”