Last winter, on a day that would reach 66 degrees by noon, I saw, on the wall of the Whitney Museum, a painting of snow. Not just snow: “The Trapper” (1921) by Rockwell Kent also depicts a lone man; a dog; mountains, clouds, and sky; a pale half-moon. But it was the snow, along with the blue shadows graphed over it, that gripped me. In the dimly lit room (its dimnessexacerbated by the over-bright sun outside) the whole painting seemed to glow. I couldn’t stop looking. The winter of 2019 would prove to be one of the warmest on record, during which only 4.8 inches of snow would fall. Stumbling on Kent’s painting felt like unearthing a picture of a lost loved one: the recognition, the elation, the grief. Yet I only wanted more. My daughter had askedthat morning if it would ever snow again. I knew it would, but I also knew that, here and elsewhere, it will snow less. In northern Europe snow festivals had been canceled. In Hokkaido, Japan, snow had been imported by truck. Always traced with ephemerality — the snow likely melted before the rendering was done — paintings of snow now record a double evanescence. 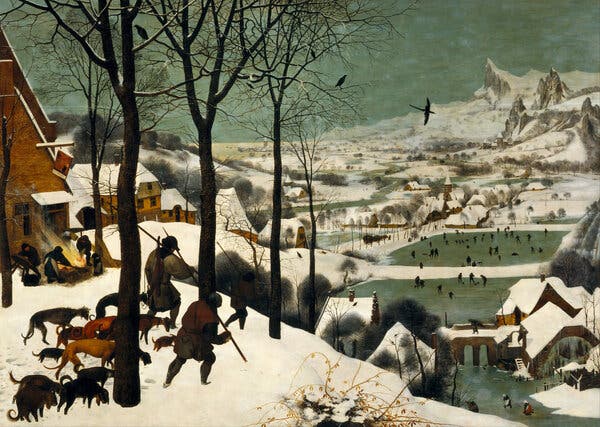 Pieter Bruegel the Elder’s “The Hunters in the Snow” (1565), part of his series of six paintings depicting the seasons, in the collection of the Kunsthistorisches Museum in Vienna, Austria.Credit…© KHM-Museumsverband

Artists have made snow a subject since at leastthe 15th century, when winter scenes began appearing in illuminated books of hours. The best-known of these, “February,” from circa 1412-1416 and usually attributed to the more rustic of the Dutch Limbourg brothers, Paul, is exquisite: the snow resting on the sheep pen, the dovecote, the beehives. Most of the early examples are, not surprisingly, from Northern Europe, among them Pieter Bruegel the Elder’s landmark “The Hunters in the Snow,” from 1565. Persian and Indian painters weren’t doing observational landscape painting at the time, but Navina Najat Haidar, the curator in charge of Islamic Art at the Met, points to snow in several 15th-century illustrations for the epic Persian poem “The Shahnama” (circa 977-1010 C.E.) by Ferdowsi, including one in which a sorcerer conjures a storm to engulf an Iranian army. In Japan, snow was both subject and symbol in woodblock prints, where the washi paper was sometimes left bare to create a field of white. Artworks such as these, it turns out, may provide the most complete cultural record of how humans have lived with, and in, snow.

The Limbourg brothers’ “February” (circa 1412-1416), an illuminated manuscript page from “Les Très Riches Heures du Duc de Berry.”Credit…Photo: © R.M.N./R.G. Ojéda
Ivan Shishkin’s “In the Wild North” (1891).Credit…Bridgman Images
Katsushika Hokusai’s “Morning after the Snow at Koishikawa in Edo” (circa 1830-32), from the series “Thirty-Six Views of Mount Fuji.”Credit…Photo: © The Trustees of the British Museum/Art Resource, NY

These works also give us an emotional registry of the feelings — smallness, sublimity, foreboding, tranquillity — that snow evokes. In “In the Wild North” (1891), the Russian landscape painter Ivan Shishkin conjures a kind of spectral terror with a single snow-covered tree. In Katsushika Hokusai’s “Morning after the Snow at Koishikawa in Edo” (circa 1830-32), where a tea pavilion seems to float in a snow-covered landscape, the world is becalmed. The luminousness in Maureen Gallace’s landscapes with snow, such as “Ice Storm, Easton (with Robert)” (2015), is matched by their loneliness, the structures, if there are any, unpeopled and without windows, as if the material world has sealed into a coherent whole without us.

Claude Monet’s “The Magpie” (1868-69) in the collection of the Musée d’Orsay in Paris.Credit…Photo: © RMN-Grand Palais (Musée d’Orsay)

In changing how they painted snow, artists changed how we perceive it. The Impressionists, living through a series of exceptionally cold winters, trained their eyes on the interplay between snow, light and color, studying every variety of reflection, glare and shadow. Claude Monet painted more than 100 snow scenes; his “Magpie,” which was rejected from Paris’s Salon of 1869 for being too drab, is now considered an early masterpiece. The artist radically used blue in the shadows in the work; before long, blue shadows were commonplace, so much so that Kent could rhapsodize about “loving the blue shadows, loving the forms that cast them and the deeps of space their blue reflected.” Fifty years after Monet, Wassily Kandinsky barely used visible white at all to capture snow beneath a setting sun in his 1909 “Winter Landscape” — it’s a profusion of pink, blue, yellow, green and even black. In these paintings, as in much of art, to capture the essence of something requires betraying its particulars. At the same time, paint’s qualities — density, fluidity, the ability to be layered — can make it inherently mimetic of snow, as with the ridges visible in Gallace’s brushwork. In Peter Doig’s magnetic 1994 painting “Cobourg 3 + 1 More,” snow seems to fall in the front of the canvas, forcing you to cast through it to the blurry image behind, and to serve “almost as a screen or veil of memory,” as the critic Adrian Searle noted in a 2017 lecture with Christie’s.

Doig, raised partly in Canada, paints his snow scenes from photographs as well as memory. But for other artists, the physical hardship of painting in frigid plein air was treated as a test of endurance, fortitude and perhaps masculinity. A passer-by once caught a glimpse of Monet, who painted not just the winters of France but those of Scandinavia, at work in the cold, complete with foot-warmer, gloves and three coats, his face half-frozen as he studied an effet de neige, as the Impressionists called it. Kent, meanwhile, chased snow to Greenland, Newfoundland, Maine, Vermont and an isolated Alaskan island, where he spent part of a year with his young son.

To paint outdoors in Alaska, he wrote in 1920 in “Wilderness,” his “journal of quiet adventure,” “was bitterly cold work — to crouch down in the snow; through bent knees the blood goes slowly, feet are numbed, fingers stiffen.” The work was made bearable by the warm cabin nearby, and by the snow itself, “lying deep and light and over all — even the tree tops — … a delight.” I recognize myself in these words, which reveal an appetite for the challenge snow poses. To bear up against nature’s indifference can be invigorating and also corrective. It can feel hostile, personal, when snow stings and blinds you. It never is.

Not long after my trip to the Whitney, a woman in Prospect Park told me she was missing snow. Such conversations happened often last winter. She missed how the city would stop for a little while when it snowed — everyone at home, no one having to rush anywhere, the world on pause. I missed that too. Is there a stronger feeling of comfort than being warm within one’s home, watching the steady loveliness of falling snow through a window? The city silent, its frantic rhythms suspended.

I didn’t know, as this woman and I talked, that within weeks we would all be home. The first few days of quarantine, in fact, felt like snow days. But soon their queasy underlining became permanent, the pause button stuck. In New York the snow never came, yet still we stayed home, isolating long enough to reach another winter. This past December it finally snowed, a thick coat that lasted for days, and we went out, already nostalgic for the glinting white world before us, as if we’d stepped into a painting from our past.