Portugal, struggling to contain a coronavirus outbreak that has led to the highest death rate in Europe, has rapidly filled the beds in intensive care units established for Covid-19 patients and is being forced to turn away critically ill patients from hospitals.

Overwhelmed hospitals, particularly in the capital region of Lisbon, have asked patients to try to treat themselves at home, and some patients have been moved to hospitals in regions with less severe outbreaks. The government has also asked other European countries for assistance.

Those who do show up at hospitals in Lisbon are finding a system on the brink, with scores of people lining up outside and waiting for treatment in ambulances.

“I really didn’t believe this could ever have happened in Portugal, having patients going door to door to find a hospital to be saved,” said Tomás Lamas, a doctor who works in the intensive care units of two hospitals in Lisbon. Hospitals are now being forced to make life-or-death decisions about which patients to treat. “Three months ago, we had patients who were admitted to intensive care but who are now not being considered, basically because they have chronic diseases or are old,” he said. 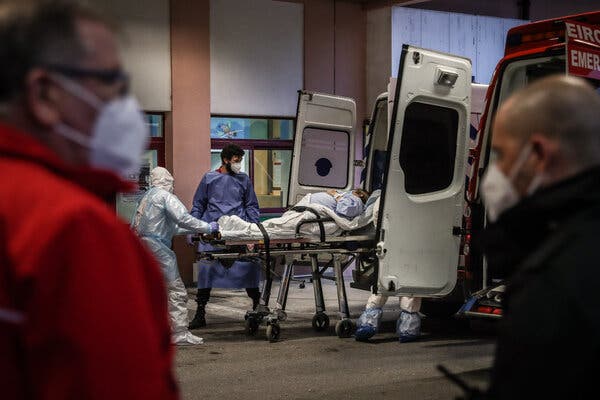 Transferring a coronavirus patient in Lisbon. Hospitals are now being forced to make life-or-death decisions about which patients to treat. Credit…Mario Cruz/EPA, via Shutterstock

Portugal, a nation of about 10 million people on the Iberian Peninsula, is in the grips of its worst crisis of the pandemic. It has recorded 12,757 total coronavirus-related deaths, 5,576 of those in the last month alone.

Last spring, during the first wave of infections, Portugal was one of Europe’s success stories after implementing a strict lockdown that helped keep its death toll low, particularly in comparison with neighboring Spain.

But since Christmas, Portugal has faced a surge in cases and fatalities. This week, while new cases appeared to be falling in some regions, the outbreak in Lisbon was raging. “We are looking at a couple of weeks that will be difficult,” Pedro Siza Vieira, the Portuguese economy minister, said in a phone interview on Tuesday.

Mr. Siza Vieira contracted the virus last month, and about a third of the government’s top officials have either fallen ill themselves or had to isolate after coming in contact with someone who had tested positive.

Mr. Siza Vieira said that “a lot of people” in Portugal had seen family members during the Christmas holidays. Many, he added, had crisscrossed the country, ignoring rules prohibiting domestic travel. “The evidence of the mobility in the country shows that people didn’t even respect the restrictions that we had in place,” he said.

The Portuguese authorities also believe the crisis has been amplified by the rapid spread of the virus variant first discovered in Britain, which was most likely brought to the country by Portuguese who work in Britain and traveled back for Christmas, Mr. Siza Vieira said. “We don’t have evidence of the Brazilian variant being significantly active in Portugal, while we have evidence that the U.K. variant explains more than half of new cases, particularly in the Lisbon area,” he said.

But British officials have expressed their own concern about the spread in Portugal of the variant first discovered in Brazil, leading Britain to announce travel restrictions on Portugal, which is popular with British tourists. The travel ban was part of a wave of border closures around the world as countries race to limit the spread of new variants as they began mass vaccination campaigns.

Isabel Vaz, who runs a network of 15 private hospitals, 11 clinics and one public hospital across Portugal, said that Portugal should be praised for doubling the number of intensive care beds over the past year, as well as for the close coordination between its public and private health care systems to make full use of available resources.

A flight carrying coronavirus patients arrived on the island of Madeira last week. Some patients have been moved from hospitals in Lisbon to areas with less severe outbreaks.Credit…Duarte Sa/Reuters

Ms. Vaz added that Portugal had been caught in a difficult balancing act in the run-up to Christmas, wanting to both revive its economy and take full account of the risks of another wave of infections.

“As a country, I feel we failed to understand the real enemy and the risks that we were facing over the winter,” she said. “But of course no country’s health system is prepared for a tsunami like this.”

Whatever is driving infections in Portugal, new cases are only now starting to show signs of slowing after a national lockdown was reinstated in mid-January. Across the country, residents are required to stay home and all nonessential stores are closed. Citizens have also been barred from traveling outside the country unless for exceptional reasons.

Portugal was initially one of the laggards in Europe in terms of vaccine distribution, with the rollout also tainted by some queue-jumping scandals.But Mr. Siza Vieira insisted that the country was now on track to vaccinate about 10 percent of the population by early March. He said that 270,000 first doses of the vaccine and 70,000 second doses had been administered as of Monday.

Inside Lisbon’s hospitals, employees are working against the clock to prepare for an anticipated rise in patients requiring emergency treatment. More wards are being converted into space for Covid-19 patients, but, Dr. Lamas said, “adding beds is not the same as adding human resources, and we are calling doctors and nurses from other specialties to help us, but who are not used to handling this kind of patients”

“It is like starting from ground zero,” he continued, “because to teach people how to use different equipment — and in safe way — is a gigantic work.”

Mourning a relative in Sintra last week. Portugal now has the highest death rate in Europe.Credit…Mario Cruz/EPA, via Shutterstock

Portugal assumed the rotating presidency of the European Union in January, and pandemic efforts appear to be its focus.

Mr. Vieiria Siza said that the bloc needed additional powers to deal with a pandemic, including “uniform criteria on how to open or close borders.”

“One of the lessons that this crisis teaches us is that we do really need a European Union that is empowered and has resources to deal with this kind of threat that humanity faces and can only be tackled at continental level,” he said.

Some bloc countries offered assistance to Portugal over the weekend. The German defense minister, Annegret Kramp-Karrenbauer, said that her country was preparing to dispatch army personnel and equipment, noting that everyone deployed would be vaccinated. And Chancellor Sebastian Kurz of Austria said on Twitter that his country would welcome patients transferred from Portugal, without detailing how many.

Ricardo Baptista Leite, an opposition lawmaker in Portugal who is also a doctor and head of the public health department at the Catholic University of Portugal, said he was grateful for the support.

“We now have international aid coming in to try to save as many lives as we can,” he said. “But the time will come to assess what went wrong.”