BRUSSELS — Europe’s coronavirus vaccination woes snowballed into a full-blown crisis Wednesday, as Spain became the first country to partly suspend immunizations for lack of doses, and a dispute escalated with AstraZeneca over the drugmaker’s announcement that it would slash deliveries of its vaccine by 60 percent because of production shortfalls.

The European Union has been beset by a litany of problems since it approved its first coronavirus vaccine, made by Pfizer and BioNTech, in December and rushed to begin a vast immunization campaign weeks behind rich nations like the United States and Britain.

While it is flush with cash, influence and negotiating heft, the bloc of 27 nations has found itself behind those countries, as well as others like Israel, Canada, and the United Arab Emirates, mounting similar efforts to get enough doses for their citizens, even as many countries across the world, particularly poorer ones, struggle to secure any at all.

The European Commission, the bloc’s executive branch, last week set a goal to have 70 percent of its population inoculated by this summer, a goal that was dismissed four days later by the president of the European Council, Charles Michel, as “difficult.”

By this week, a mere 2 percent of E.U. citizens had received at least one dose of a coronavirus vaccine, according to numbers collected by Our World in Data, compared with some 40 percent of Israelis. The figure in Britain was 11 percent, and just over 6 percent in the United States.

In a rare bit of good news, the French drugmaker Sanofi said Wednesday that it would help produce more than 100 million doses of the Pfizer-BioNTech vaccine, starting this summer, but those doses would likely come too late to salvage vaccination plans for the first half of 2021. 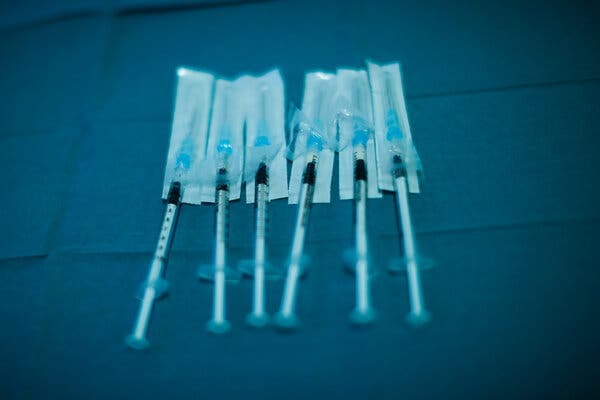 Syringes containing the Pfizer-Biontech coronavirus vaccine readied for use at the MontLegia CHC hospital in Liege, Belgium, on Wednesday,Credit…Francisco Seco/Associated Press

Pfizer informed the European Union and other countries outside the United States this month that it had to drastically cut its vaccine deliveries until mid-February to upgrade its plants in order to ramp up output, adding to the severe supply problems facing the region.

But it was AstraZeneca’s sudden announcement last week that it would cut deliveries in February and March by 60 percent, that really upended European Union vaccination plans. Many countries had built their strategies around expectations of millions of those doses of that vaccine, which is cheaper and easier to store than others, in the first quarter of the year. AstraZeneca said it was having production troubles at one of its factories, but did not specify what those were or offer details on how it was addressing them and when.

The AstraZeneca vaccine is expected to gain approval for use in the European Union on Friday, and the bloc had been expecting some 80 million doses to be delivered in the course of the next two months.

With the company now saying it can’t make good on its promise to deliver, it is unclear when the bloc’s target might be reached.

Some critics have blamed the European Commission for the mess. The commission struck deals on behalf of its 27 member states to secure a total of 2.3 billion vaccine doses from several companies. But some of its agreements lagged behind those struck by the United States and Britain by weeks. AstraZeneca and some European opposition politicians say the delay put the bloc at the back of the line for deliveries.

But the commission has hit back against the criticism.

AstraZeneca needed “to live up to its contractual, societal and moral obligations,” she said.

Scientists working on the vaccine made by AstraZeneca and the University of Oxford in November in Oxford, Britain.Credit…Andrew Testa for The New York Times

The bloc’s drug regulator, the European Medicines Agency, has also been accused of being too bureaucratic and taking too long to grant authorization to vaccines. The agency has rejected that criticism, defending its processes as being more thorough, by spending more time with data from clinical trials and going back repeatedly to pharmaceutical companies for additional details.

The vaccine crisis in the European Union is set against a still-raging second wave of the coronavirus, prolonged lockdowns in most member countries, and widespread panic over the spread of at least two highly infectious variants of the virus that are bringing national health systems to their knees yet again. France, which has imposed restrictions on social and economic life since a second wave of the coronavirus began to overwhelm it in late October, is now considering moving into an even stricter lockdown like the one it had imposed in the springtime.

The pain of supply shortages is being felt across Europe, with Spain announcing Wednesday that it would suspend the vaccination program in Madrid for two weeks, and warning that Catalonia, in the northeast of the country, may follow suit.

“Tomorrow our fridges will be empty,” Josep Maria Argimon, a regional health official in Catalonia, said, referring to the dwindling supplies of the vaccine.

The deputy head of Madrid’s regional government, Ignacio Aguado, told a news conference that priority needed to be given to administering the second dose of the vaccine and that Madrid did not have enough supplies to continue with the first round of vaccinations.

Mr. Aguado called on the central government to urgently demand extra supplies from the European Union, saying that it needed to “go to Brussels and get more doses” for Spain.

People arriving on Wednesday to receive doses of the Oxford-AstraZeneca Covid-19 vaccine, at a vaccination centre set up at a racecourse in Bath, England.Credit…Adrian Dennis/Agence France-Presse — Getty Images

The sentiment was also expressed by local-government leaders in other E.U. countries.

“My conviction is that there is a real shortage of vaccines,” Martine Aubry, the mayor of the northern French city of Lille said this month, as she urged the French government to “tell the truth.” François Rebsamen, the mayor of Dijon, in northeastern France, decried “the central government’s failure to deliver vaccines.”

And in Germany, the bloc’s richest and largest country, regional leaders were livid about the shortages, for which they blamed their own government and the European Union.

“I have to say that I am totally disappointed with how this has played out,” Manuela Schwesig, governor of the northeastern state of Mecklenburg-Western Pomerania said last week.

“We had a very clear agreement — we in the states prepare the immunization centers and set everything up. We have done that. The logistics are there and we could offer an inoculation to all of our citizens,” Ms. Schwesig said on the ZDF public television network. “But we can’t use it because we don’t have enough vaccines.”

Delays in ordering and approving vaccines, and the current shortages, have not been the only problems, experts said.

Administering a Pfizer/Biontech vaccine to a health care worker on Wednesday in Liege, Belgium.Credit…Francisco Seco/Associated Press

“Some countries have planned the entire process well in advance and have done their job in an efficient and effective way,” said Rosanna Tarricone of Bocconi University in Milan. But while the E.U. countries “have announced their plans, they haven’t actually planned anything appropriately.”

In parts of the European Union, especially in its poorer eastern flank, people have been struggling to access vaccines because of a lack of trained nurses, needles and syringes, or poor administration and communication with citizens.

Still, despite the growing concerns and political fallout, experts warned against adopting the British policy of allowing up to 12 weeks to pass between the first and second doses of two-dose vaccines such as the Pfizer and Moderna ones.

In the European Union, regulators have recommended allowing a maximum of three weeks between the two Pfizer doses, or four weeks in the case of the Moderna vaccine.

“In the E.U., at the national level everybody tries to go as fast as possible, because this is what we need to do,” said Jean-Michel Dogné, a professor at the University of Namur in Belgium and adviser to the European Medicines Agency and the World Health Organization. “But we need to be careful to be able to give the second dose, and to anticipate new vaccines that may come.”