LONDON — When the pizza-sized boxes of the Pfizer vaccine arrived midday Thursday, an hour behind schedule, it set off a race against the clock at the Bloomsbury Surgery, a medical clinic in London’s Camden district that has been transformed during the pandemic into a humming vaccination center.

Because the vaccine could only be refrigerated for three days once it reached the clinic, health care workers knew they had to inject 400 doses a day by Sunday to use up the supply. There was already a line of people waiting for “jabs,” so doctors swiftly diluted the vaccine, put the vials on trays and handed them out to a team of assistants.

This is the front line in what has become the most ambitious peacetime mass mobilization in modern British history. Britain has set up dozens of vaccination centers in sports stadiums, churches, mosques, even an open-air museum in the Midlands, familiar to television views as the set for the popular crime series “Peaky Blinders.”

With nearly eight million people, or 11.7 percent of the population, having already gotten their first shot, Britain’s pace of vaccination is the fastest of any large nation in the world. Only Israel and the United Arab Emirates are moving faster.

The rapid rollout is a rare success for a country whose response to the coronavirus has otherwise been bungled — plagued by delays, reversals and mixed messages. All of which have contributed to a death toll that recently surged past 100,000 and cemented Britain’s status as the worst-hit country in Europe.

Success has brought its own headaches: Doctors now worry about running short of supplies, after a vaccine war erupted between Britain and the European Union. The E.U. imposed export restrictions on vaccines made in the bloc on Friday after accusing a British-based vaccine maker, AstraZeneca, of favoring its home market.

And Britain’s aggressive approach is not without risks: To reach more people quickly, it opted to delay giving them second doses for up to 12 weeks after the first, rather than the three or four weeks tested in clinical trials.

At the Bloomsbury clinic, however, there was a distinctly British atmosphere of getting on with it. The mostly elderly patients waited patiently in line, rolled up their sleeves for their jabs, and then retired to an outdoor gazebo for 15 minutes to be monitored for potential reactions. 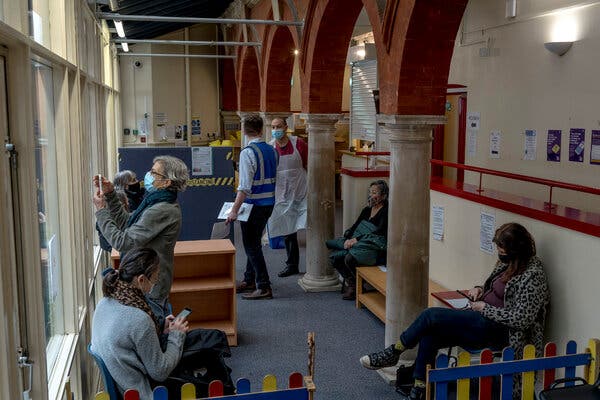 After getting a shot, people are monitored for 15 minutes for potential side effects at the Bloomsbury Surgery in London.Credit…Andrew Testa for The New York Times

“So many of my friends have had it,” Emerenciana Mora, 72, a retired switchboard operator, said of the vaccine as she watched a physician assistant, Nasra Yusuf, prepare the needle. “Even the queen has had it.”

The divergence between Britain and its European neighbors has prompted some to claim an early windfall from Brexit. Britain’s divorce from the European Union helped give it the political leeway to authorize multiple vaccines before the bloc and to swiftly lock up its own production of the vaccine from AstraZeneca and the University of Oxford.

France, by contrast, has vaccinated only 1.8 percent of its population and Germany 2.6 percent, according to numbers collected by Our World in Data. That reflects supply shortages that have rippled across the continent, as well as the slower pace of European Union regulators in approving vaccines.

But Britain’s success is also a result of back-to-basics decisions by the government of Prime Minister Boris Johnson.

Rather than contracting out the campaign to private companies or building it from scratch, as it did with its costly, ineffective contact tracing operation, the government has put vaccination in the hands of the National Health Service, which despite financial strains is still widely revered by the British public.

Beyond state hospitals, general practitioners are at the forefront of the program. Not only does that put trusted local doctors, who are experienced with seasonal flu inoculations, in charge, but it has also allowed these doctors to precisely target the people in the government’s highest priority groups.

That is a stark contrast to the more fragmented approach in the United States. While people there have had to scramble for appointments on finicky online portals and overwhelmed telephone hotlines, British hospitals and physicians have directed the scheduling themselves, allowing them to begin with their oldest and most vulnerable patients.

And while American states use complicated rules to dictate who is eligible for vaccines — which has contributed to slowing the rollout in some places — Britain has a clear system of prioritizing those who, because of their age, are most at risk of dying from the virus, along with the nursing home aides and health care workers who treat them.

“We work through those priority groups with absolutely no deviation,” said Daniel Beck, a general practitioner and the head of a federation of doctors who was busy preparing vials at the clinic. “It benefits everyone, regardless of whether they are someone who left home without an education or if they’re a lord.”

Among the 6,000 people vaccinated at the Bloomsbury clinic since mid-December was Joan Collins, 87, the British actress famous for her role in “Dynasty.” But Dr. Beck said his major priority was trying to reduce vaccine hesitancy among racial and ethnic minorities, who polls have shown are more mistrustful than white people of health authorities’ backing of the vaccine.

Abdul Mathlib, 85, a retired catering worker who had just received his shot, said he worried about the vaccine causing side effects, even years later. But Mr. Mathlib said it was a risk worth taking, adding, “You have to take it, right?”

While some observers point to Britain’s higher tolerance for risk than the European Union, they credit more of the vaccination success to the country’s strong scientific base, as well as to “good old-fashioned preparation,” said David Goodhart, a writer whose last book, “The Road to Somewhere,” explored Brexit-era Britain.

It was not, in any event, typical of Britain’s broader response.

Few foreign leaders have struggled with the pandemic like Mr. Johnson. He abandoned large-scale contact tracing and resisted imposing a lockdown, then ended up in an intensive care unit himself after contracting the virus.

But during those chaotic early days, his ministers moved to invest in vaccines and secured early contracts with manufacturers. They also recruited Kate Bingham, a British venture capitalist, to lead a government vaccine task force.

In March, the government provided initial funding — 2.6 million pounds, or $3.5 million — to the Oxford research team. By May, when the vaccine was still in clinical trials, Britain reached a deal with AstraZeneca to buy tens of millions of doses, three months before the European Union negotiated its purchases.

With worries about vaccine protectionism already flaring, British officials were determined to make any homegrown vaccine quickly and easily accessible to Britons. They spoke to the Oxford team as it negotiated with Merck and other drug companies in search of a partner to mass-produce and distribute the vaccine.

Oxford eventually struck a deal with AstraZeneca, which is headquartered in Cambridge.

“They made it pretty clear to me and others that they wanted to know about the deal, and they were anxious about vaccine nationalism,” John Bell, an Oxford professor and member of the government’s vaccine task force, said last year, referring to British health officials.

Two plants in England are now manufacturing the vaccine, and a firm in Wales is preparing it for distribution. The British government has said the bulk of its shipments of AstraZeneca vaccines come from that supply chain.

AstraZeneca has said that its early agreement with Britain helped it iron out the inevitable manufacturing hiccups before it began distributing the vaccine. Production problems in a Belgian plant led the company to announce it would cut its deliveries to Europe by 60 percent, which triggered the cross-channel dispute.

A volunteer in a clinical trial testing the AstraZeneca/Oxford vaccine getting a shot in Oxford, England, in November.Credit…Andrew Testa for The New York Times

“With the U.K., we have had an extra three months to fix all the glitches we experienced,” Pascal Soriot, the chief executive of AstraZeneca, told an Italian newspaper, la Repubblica, this week.

On Friday, European Union drug regulators authorized the AstraZeneca vaccine for all adults, sticking to the precedent set last month by Britain’s regulator.

Britain, meanwhile, may soon get yet another vaccine.Novavax, a biotechnology company based in Gaithersburg, Md., reported Friday that its vaccine had been shown to be 89.3 percent effective in a large-scale trial in Britain. The government has secured 60 million doses, which will be made at a plant in northeast England. If British regulators approve it, the vaccine will be delivered in the second half of 2021.

All told, the British government has spent at least 11.7 billion pounds, or $16 billion, in developing, making, buying, and administering vaccines.

“Vaccination is the one thing we’ve gotten right,” said Christina Pagel, a professor of operational research at University College London.

That does not mean the rollout has been without tensions. With hospitals overrun and a more contagious variant ripping through the country, Britain has bet on giving more people the partial protection of a single dose, rather than quickly giving fewer people the complete protection of two doses.Doctors whose booster shots have been delayed have been angered by the approach, accusing the government of making them the subjects of a risky new experiment that they worry will render vaccines less effective. Immunologists have raised concerns that a country full of people with only partial immunity could breed vaccine-resistant mutations, while Pfizer said the strategy is not supported by the data gathered in clinical trials.

But the idea of prioritizing first shots has gained some traction as countries struggling with the surging virus and shortfalls in vaccine supply look for ways to get partial protection into their population.

For the harried doctors at Bloomsbury clinic, the biggest challenge is simply getting a steady supply of doses.

“Our biggest issue is that we don’t know, week to week, what deliveries we’re getting,” said Dr. Ammara Hughes, the clinical director, as she anxiously scanned her iPhone for news of the next delivery. “The logistics are difficult.”