Mr. Malley will be responsible for trying to persuade Tehran to rein in its nuclear program — and stop enriching uranium beyond limits imposed by a 2015 deal with world powers — and agree to new negotiations before the United States lifts its bruising economic sanctions against Iran.

It is far from clear if the strategy, as directed by Mr. Biden, will succeed. Iran has repeatedly said it will not come back into compliance with the 2015 nuclear accord until the United States eases its sanctions, setting up a high-stakes contest over which side will blink first.

Returning to the nuclear deal, which was negotiated by the Obama administration, was among Mr. Biden’s campaign promises after President Donald J. Trump withdrew from it in 2018. Since then, Iran has steadily violated the agreement that had sought to limit its nuclear program, and last year, international inspectors concluded that it again had enough fuel to build a bomb.

Mr. Malley currently runs the International Crisis Group in Washington, a conflict resolution organization. He was selected despite charges from conservatives that he would offer too many concessions in the interest of striking any possible deal. His appointment was earlier reported Thursday by Reuters.

One of the senior State Department officials said that negotiations remained far in the distance; the second official disputed reports that the United States and Iran had already begun back-channel talks. Both spoke on the condition of anonymity before Mr. Malley’s appointment was officially announced.

The first official said Mr. Malley and other diplomats would initially consult with leaders in Europe, in the Middle East and in Congress to ensure that any new negotiations would reflect their concerns and insights. 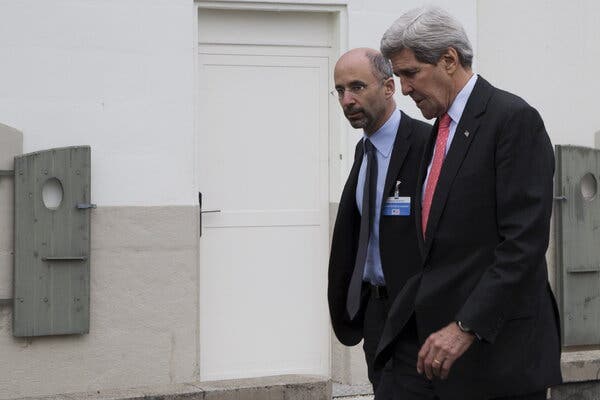 Mr. Malley, left, in 2015 with Secretary of State John Kerry after a meeting with Iran’s foreign minister in Switzerland.Credit…Brian Snyder/Reuters

Britain, France and Germany are eager to return to the 2015 accord and have tried to keep it intact even as Tehran pushed past its limits. But Israel and Muslim nations across the Middle East have long opposed the deal, in part because it did virtually nothing to address Iran’s other military threats, including its missiles program and support for proxy militias in the region.

Senior officials in Congress, from both sides of the political aisle, also remain skeptical about a return to the accord.

The first State Department official said American negotiators would ultimately seek a “longer, stronger but also broader deal” to curb Iran’s missiles and proxies — another strategy that Tehran has already refused to consider.

But it echoes what the Trump administration had demanded when it withdrew from the 2015 deal and imposed a pressure campaign of harsh sanctions and military threats against Iran and its senior officials.

The State Department official said there was hope for “a way forward,” noting the dire state of Iran’s economy. But he would not give details, including whether any sanctions relief might be offered as a good-faith measure, except to reject any comparison to the Trump administration’s pressure campaign.

Mr. Malley will oversee a team of negotiators and experts who will bring what Secretary of State Antony J. Blinken described on Wednesday as “differing perspectives” to the issue.

Even before Mr. Malley was appointed, conservatives had accused him of being too accommodating toward Iran and not supportive enough of Israel, based on his track record as a senior official for Middle East affairs during the Obama and Clinton administrations. Senator Tom Cotton, Republican of Arkansas, an avowed opponent of the nuclear deal, wrote on Twitter that Mr. Malley’s selection would be “deeply troubling.”

Mr. Malley, who does not require Senate confirmation, will be based at the State Department and report to Mr. Blinken, with whom he went to high school in Paris.