WASHINGTON — The United States economy will return to its pre-pandemic size by the middle of this year, even if Congress does not approve any more federal money to aid the recovery, the Congressional Budget Office said on Monday. But it will be years before everyone thrown off the job by the coronavirus is able to return to work.

Those projections could further complicate President Biden’s ability to quickly pass a $1.9 trillion stimulus package, as moderate Republicans and even some left-leaning economists express concerns that too much new federal borrowing could overheat the economy.

Still, Democrats worried about families putting food on the table and avoiding eviction or foreclosure as the pandemic continues to suppress economic activity are forging ahead with Mr. Biden’s more aggressive plans, introducing budget resolutions in the House and Senate on Monday that would allow legislation based on the president’s proposals to pass without Republican votes.

Mr. Biden was set to meet late Monday with a group of 10 Republican senators who have drafted a $600 billion economic aid proposal of their own. It would scale back many of the president’s spending ambitions, like additional unemployment benefits and $1,400 direct payments to individuals, while scrapping other elements entirely, like his proposed aid to state and local governments to patch budget shortfalls.

Mr. Biden, who spent three decades in the Senate, has welcomed discussions with Republicans but shown little willingness to significantly cut the cost of his plan. The budget office report on Monday offered some evidence to support his position, with figures suggesting that the economy could absorb substantial new federal assistance without stoking higher inflation or forcing the Federal Reserve to raise interest rates.

Congressional Democrats and many liberal economists on Monday repeated their calls for lawmakers to act swiftly and aggressively to help the large swaths of Americans still struggling to recover, a message echoed by Mr. Biden’s aides.

Jen Psaki, the White House press secretary, told reporters that the budget office report was “not a measure of how each American family is doing and whether the American people are getting the assistance they need.” Mr. Biden, she said, “believes that the risk is not going too small, but not big enough.”

The new projections from the office, which is nonpartisan and issues regular budgetary and economic forecasts, show the economy healing faster than the office’s forecasts over the summer suggested it would.

Officials told reporters on Monday that the brightening outlook stemmed from large sectors of the economy adapting better and more rapidly to the pandemic than originally expected. It also reflected increased growth driven by a $900 billion economic aid package that Congress passed in December, which included $600 direct checks to individuals and more generous and longer-lasting benefits for the millions of people who are still unemployed.

Other independent forecasts, including one from the Brookings Institution last week, have projected that another dose of aid — like the $1.9 trillion package Mr. Biden has proposed — would help the economy grow more rapidly, topping its pre-pandemic path by year’s end.

Some budget hawks worry that too much aid would risk wasting money and stoking inflation. “It’s probably better to overshoot than undershoot, but there can be too much of a good thing,” said Maya MacGuineas, the president of the Committee for a Responsible Federal Budget, a nonprofit in Washington. “Sending money to people who don’t need it, overstimulating the economy or unnecessary debt all set us up for more things to clean up later.” 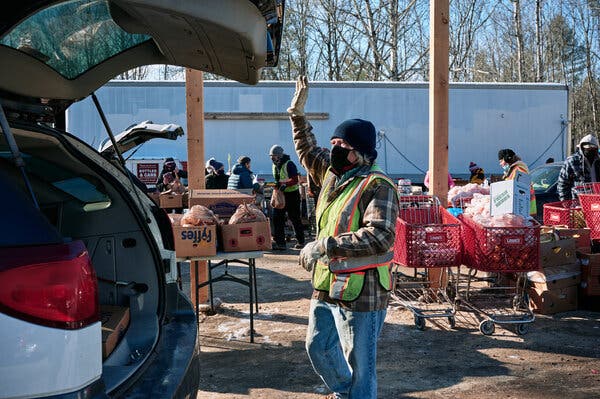 Volunteers loaded food donations in Harrison, Me., last week. The budget office report is “not a measure of how each American family is doing and whether the American people are getting the assistance they need,” Jen Psaki, the White House press secretary, said on Monday.Credit…Tristan Spinski for The New York Times

The budget office report shows little risk of overheating at the moment. The economy is projected to remain below potential levels until 2025 on its current path. By 2030, it is projected to run below potential again. At the same time, big economic risks remain. The number of employed Americans will not return to its pre-pandemic levels until 2024, budget officials predicted, reflecting the prolonged difficulties of shaking off the virus and returning to full economic activity. Officials do not see unemployment falling to its pre-pandemic level, 3.5 percent, by the end of the decade.

Jerome H. Powell, the chairman of the Fed, warned last week that the economy was “a long way from a full recovery,” with millions still out of work and many small businesses facing pressure, and that the economic outlook would depend largely on success in containing the virus.

Getting the pandemic under control also factored into the budget office’s projections, and officials said the rebound in growth and employment could significantly accelerate if public health authorities were able to more rapidly deploy vaccines.

As it stands, the budget office sees little evidence of growth running hot enough in the years to come to spur a rapid increase in inflation. It forecasts inflation levels below the Federal Reserve’s target of 2 percent for years, even with the Fed holding interest rates near zero.

On a call organized by Invest in America, a new group in Washington that is pushing lawmakers to spend aggressively on economic aid, Anna Stansbury, an economist at Harvard Program in Inequality and Social Policy, said the budget office estimates suggested “the true labor market story is that we might not reach full employment until the late years of the 2020s.”

Ms. Stansbury said that delay in reaching full employment — when nearly everyone who wants to work has a job — would mean “unconscionably high unemployment, particularly for African-American and Hispanic workers. The plan that President Biden is proposing will help us reach full employment exceptionally faster than the track we’re on right now.”