Demand for vaccines is skyrocketing as the United States grapples with a record death toll from Covid-19 and the threat of new, more contagious variants. After a slow start in December, many states and cities have quickly ramped up vaccine delivery, widening access to larger groups of people and setting up mass testing sites.

But now there’s a new wrinkle: Some mayors and governors say they have run out of available vaccines, and have had to cancel appointments.

The Biden administration has promised to overhaul the country’s faltering vaccine effort, but there’s only so much it can do to increase the available supply.

Here’s what you need to know.

How many doses are available?

There are simply not enough doses of authorized vaccines to meet the enormous demand. And that is not likely to change for the next few months.

The two companies with authorized vaccines, Moderna and Pfizer, have each promised to provide the United States with 100 million vaccine doses by the end of March, or enough for 100 million people to get the necessary two shots.

But that doesn’t mean those 200 million doses are sitting in a factory warehouse somewhere, waiting to be shipped. Both companies are manufacturing the doses at full capacity, and are collectively releasing between 12 million and 18 million doses each week.

As of Wednesday, nearly 36 million doses of the Pfizer and Moderna vaccines had been distributed to state and local governments. However, only about 16.5 million shots had been administered to patients.

But as local health authorities become more adept at vaccine distribution, they will eventually catch up to the limited supply. Some local officials, including those in New York City, have said they are already reaching that point, and have had to cancel appointments because they said they do not have enough.

President Biden said he would use the Defense Production Act to increase supply. Will that help?

Vaccine experts and the companies themselves have said that at least in the short term, using the Defense Production Act will not significantly increase supply, although every little bit could help. That’s because manufacturing facilities are already at or near capacity, and there is a worldwide race to develop vaccines that use a finite amount of resources.

Although the Trump administration was criticized for not using the Defense Production Act more aggressively to ramp up production of testing supplies and protective gear, it did use the act many times to give vaccine manufacturers priority access to suppliers of raw ingredients and equipment.

In a plan released on Thursday, the Biden administration indicated it would continue to use the act to boost supplies needed for vaccine manufacturing, as well as other materials that are required to immunize tens of millions of people. Although the plan provided few details, one example cited is increasing production of a special syringe that can squeeze six doses out of Pfizer vials that were originally intended to contain five. 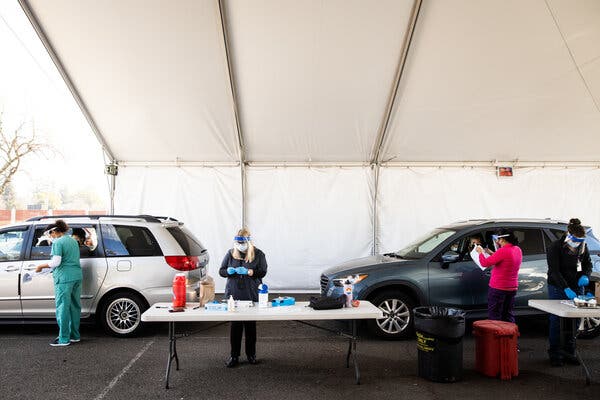 A drive-through vaccination center in Napa, Calif., earlier this month.Credit…Max Whittaker for The New York Times

What about the federal stockpile of vaccines?

There is no significant reserve of vaccines to speak of. For the most part, vaccines are being shipped out each week as they are manufactured. (The exception is a small emergency stockpile that the Biden administration has said will continue.)

Last week, Alex M. Azar II, the outgoing secretary of health and human services, stirred confusion when he announced that the federal government would be releasing a reserve of vaccine doses. Many states said they were told that this meant an influx of vaccines was on the way, which could be used to inoculate more people.

In his news conference, Mr. Azar urged states to open up their immunization policies, and said they had been moving too slowly to use the doses they had already been sent. As a result, several governors, including Andrew Cuomo in New York, changed eligibility rules to allow people 65 and older to get the vaccine. 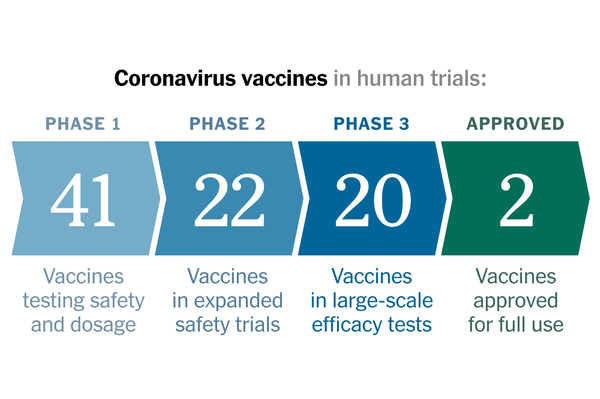 However, senior administration officials clarified last Friday that all of those reserve doses were already earmarked as booster shots for people who had gotten the vaccine, and that Mr. Azar was just spelling out the logical extension of a distribution policy that had been established by top federal officials in December, when shipments began. The release of the reserve doses would go to people who needed their second dose, not new pools of people who were getting their first shot.

Going forward, Mr. Azar said, the government would shift to a new model: rather than holding onto a reserve of booster shots, each weekly shipment from the manufacturers would include doses for new people as well as second doses for those due for their booster shots. President Biden echoed that policy in announcing his vaccine plan last week.

Will there be enough vaccine supply to give everyone a second dose?

They have said that each weekly shipment will give priority to people who need their second dose that week, and whatever is left will go to vaccinating new people.

But the plan relies on state and federal governments working together and accurately reporting who has received a vaccine, and what is needed from week to week. Many state governments have complained they do not have the resources to carry out the vaccine distribution plan, and the next few weeks will demonstrate how well the system works.

The incoming Biden administration has vowed to overhaul distribution to the states, providing more transparency to local officials about how much vaccine they can expect, in the hopes of allowing states to better plan.

Some Democratic governors have asked to buy vaccines directly from Pfizer. Is that possible?

No, it’s not likely to happen.

Last week, Gov. Gretchen Whitmer of Michigan asked the federal government for permission to buy 100,000 doses of vaccine directly from Pfizer. And on Monday, Gov. Cuomo wrote a letter to Pfizer asking for the state to buy vaccines directly.

Pfizer and Moderna’s supply has been fully claimed for at least the first quarter of this year, meaning it’s unlikely there will be any spare vaccine to sell to individual states.

In addition, the emergency use authorizations for the Pfizer and Moderna vaccines stipulate that the federal government oversees distribution.

In a statement, a Pfizer spokeswoman said the company “is open to collaborating with the U.S. Department of Health and Human Services on a distribution model that gives as many Americans as possible access to our vaccine as quickly as possible.” But she noted that “before we can even consider direct sales to state governments, H.H.S. would need to approve that proposal.”

A state official said on Tuesday that the governor felt it was important to exhaust all his options, no matter how unlikely they would be succeed, and pointed to his efforts in March to directly buy ventilators from manufacturers — setting up a bidding war among states that he later criticized the federal government for fueling.

But advisers to the Biden administration have indicated that they are not in favor of such a move. On Monday, Dr. Celine Gounder, a pandemic adviser to Mr. Biden during his presidential transition, said allowing states to reach separate deals would cause more problems than it would solve.

In an interview on CNBC, Dr. Gounder noted Mr. Cuomo’s previous criticism of bidding over ventilators. “I think this kind of an approach to vaccine allocation is going to result, frankly, in the same kind of situation that he, himself, was criticizing last spring,” she said.

Vaccinations underway in Minneapolis on Tuesday.Credit…Octavio Jones for The New York Times

Are we going to get more vaccines anytime soon?

At least three other vaccines are in late-stage clinical trials, and the success of any one of them could mean millions of more doses for U.S. residents by this spring.

Johnson & Johnson is expected to announce the results of its vaccine trial any day now, and if it is successful, the first doses could become available in the United States by February. Although early production of the vaccine has lagged, the company has signed a deal to provide 100 million doses of its one-dose vaccine by the end of June.

By March and April, results from trials testing two-dose vaccines by AstraZeneca and Novavax could also be made public. AstraZeneca has an arrangement with the U.S. government to provide 300 million doses, and Novavax to provide 110 million.

What’s more, both Pfizer and Moderna say their factories are ramping up and expanding capacity each week. They have signed deals to supply an additional 100 million doses each of their vaccines in the second quarter of this year.

When will we have enough vaccines for everybody in the country?

It’s still not clear, although conservatively, there could be enough vaccines by the summer.

If no other vaccines are authorized, the United States has signed deals with Pfizer and Moderna for a total of 400 million doses to be delivered by summer, or enough for 200 million people.

That’s pretty close to the American population of 260 million adults (the vaccines are not approved yet for children although studies are underway).

But if other vaccines do prove safe and effective — which experts say is likely — millions more people could be vaccinated more quickly, possibly by late spring.