LONDON — Nearly four years after a fire killed 72 people as it tore through London’s Grenfell Tower — a high-rise building clad in flammable material — Britain’s opposition party is demanding that the government come to the aid ofhundreds of thousands of people living in dangerous apartments and buildings with similar cladding.

The Labour Party on Monday called for a national task force to deal with the issue, and urged the government to establish the extent of dangerous cladding still on buildings across the country. The measures are part of a proposedamendment to a Fire Safety Bill aimed at helping those in homes still wrapped in treacherous cladding. It would prioritize the highest risk buildings, request funding be provided to remove flammable cladding immediately, and seek protection for leaseholders and taxpayers to keep them from shouldering the cost.

Keir Starmer, the opposition Labour leader, said in a statement ahead of a debate in Parliament on the issue, that the measures need to “be a turning point for those affected by the cladding scandal.”

“Millions of people have been sucked into this crisis due to years of dither, delay and half-baked solutions from the government,” Mr. Starmer said. “For many leaseholders, the dream of homeownership has become a nightmare. They feel abandoned, locked down in flammable homes and facing ruinous costs for repair work and interim safety measures.”

The fast-spreading, and devastatingly deadly, fire at Grenfell Tower in June 2017 was driven by the cladding on its exterior, an initial inquiry into the blaze found, with combustible Aluminium Composite Material, or ACM, the main cause for its unabated spread. 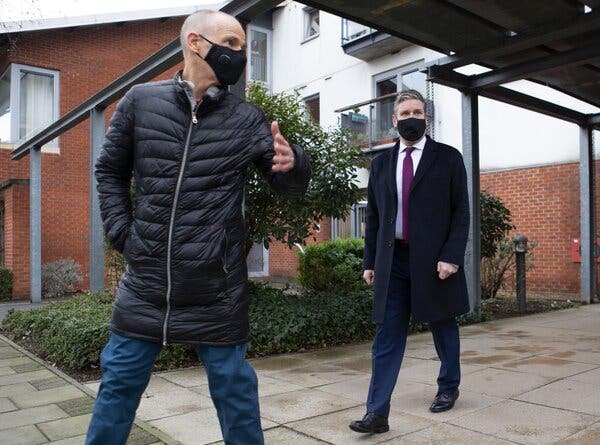 The cheap cladding had long been banned in many European countries, and the United States, because of the fire hazard it posed. But in England, it was cleared for use widely. After the Grenfell fire, the government vowed remove the material from similar buildings.

But in the years since, and despite numerous government promises, there are still dozens of buildings clad in the very material used on Grenfell Tower, and even more believed to be wrapped in other flammable cladding. Some of these materials are banned from new buildings but have remained on existing ones.

More than 400 high-rise buildings with the same cladding were identified by the government, and it eventually directed funding to remove the cladding from public housing, and committed to fund the remediation of high-rise private residential buildings as well.

But according to the most recent data, released by the government in Dec. 2020, there are 165 high-rise buildings with unsafe ACM-cladded exteriors across England, most of them in urban areas of Manchester and London.

Additionally, an estimated 200,000 high-rise apartments — home to some 700,000 people — are believed to be wrapped in some kind of flammable cladding materials, according to the Times of London.

The Labour Party estimates that cladding issues could affect up to 4.6 million properties, based on its analysis of figures from the New Build Database and the Office for National Statistics.

A housing development in Brentford, England, was deemed unsafe after an investigation into the building’s cladding. The development’s association ordered residents to evacuate the apartments.Credit…Leon Neal/Getty Images

In England, most private apartments are sold as long-term leases, with the building itself owned by a “freeholder,” often an investment group, and it has been difficult for either residents or the government to hold building owners liable for using shoddy material.

The cost is often passed to apartment owners, and in the case of many of the buildings with combustible cladding, these owners were mostly first-time buyers, retirees, immigrants and lower-income earners. Housing experts say the situation could take years to address.

Ten of thousands of people are living in apartments they are unable to sell, with banks unwilling to offer new mortgages on properties that may have combustible materials. Others, in buildings where the material has been identified but not removed, have been left paying for nightly fire patrols to ensure their safety. With the cost of some of the remediation work needed on buildings being passed along to leaseholders, many say the situation is untenable.

And with the coronavirus pandemic and subsequent national lockdowns forcing people to spend more time in their homes, many say they are under even more pressure.

Paul Afshar, 37, a campaigner with End Our Cladding Scandal, a group that advocates for a government effort to fix the crisis, owns an apartment in East London in a low-rise apartment block that has cladding that has still not been fully assessed.

He, like many impacted by cladding issues, bought his home under a government-run shared-ownership program, so owns just 25 percent of his property, although he is responsible for 100 percent of its maintenance. That means the cost to him personally for removing the cladding could run into the tens of thousands of pounds. Others in similar situations have had to declare bankruptcy.

It’s still unclear what type of cladding his building has — he is waiting on an assessment. He has tried to sell his one-bedroom property twice in the last 12 months. But no lenders would give his prospective buyers a mortgage, for fear of combustible cladding.

“In my case, and a lot of other people’s cases, not only are you stuck inside a flat with flammable cladding, you can’t leave, you can’t sell,” he said. “You’re effectively trapped in a fire trap.”

A memorial in June, last year, for those who died in the Grenfell Tower fire.Credit…Justin Tallis/Agence France-Presse — Getty Images

Last year, the government announced a £1 billion pound, or $1.4 billion, expansion of a building safety fund for non-ACM cladding, and on Sunday announced a £30 million relief fund for residents who have had to pay for nightly patrols. But those impacted say its simply not enough.

The government on Monday, said that the measures underway and two pieces of legislation — an upcoming building safety bill, and the fire safety bill being discussed — were the correct approach. A separate amendment to the fire safety bill, tabled by Conservative lawmakers in recent weeks has drawn broad support, putting further pressure on the government to ensure costs are not passed on to leaseholders. The lawmakers behind that measure criticized the Labour lawmakers for using Monday’s debate, and largely symbolic vote, to score political points.

Chris Pincher, the minister for state housing, speaking in Parliament, defended the measures and said the issue was a complex one.

“There is no quick fix, if there was, we would have done it long ago,” he said.