After 35 years of sharing everything from a love for jazz music to tubes of lip gloss, twins Kimberly and Kelly Standard assumed that when they became sick with Covid-19 their experiences would be as identical as their DNA.

The virus had different plans.

Early last spring, the sisters from Rochester, Michigan, checked themselves into the hospital with fevers and shortness of breath. While Kelly was discharged after less than a week, her sister ended up in intensive care.

Kimberly spent almost a month in critical condition, breathing through tubes and dipping in and out of shock. Weeks after Kelly had returned to their shared home, Kimberly was still relearning how to speak, walk and chew and swallow solid food she could barely taste.

Nearly a year later, the sisters are bedeviled by the bizarrely divergent paths their illnesses took.

“I want to know,” Kelly said, “why did she have Covid worse than me?”

Since the new coronavirus first shuddered into view, questions like the one posed by Ms. Standard have spurred scientific projects around the globe. Among the 94 million infections documented since the start of the outbreak, no two have truly been alike, even for people who share a genetic code.

Identical twins offer researchers a ready-made experiment to untangle the contributions of nature and nurture in driving disease. With the help of twin registries in the United States, Australia, Europe and elsewhere, researchers are confirming that genetics can affect which symptoms Covid-19 patients experience. These studies have also underscored the importance of the environment and pure chance: Even between identical twins, immune systems can look vastly different — and continue to grow apart over the course of a lifetime.

Dr. Mishita Goel, one of the doctors who treated the Standard twins last spring, said she was surprised to see the virus chart such different medical trajectories in each sister. “We were amazed,” said Dr. Goel, who published a case study on the twins last summer.

Both sisters were carrying excess weight and had a history of metabolic conditions. If anything, Kelly, who has asthma and a more severe case of diabetes, might have had a slightly higher risk of entering intensive care, Dr. Goel said. But it was Kimberly who fared worse.

At least some of the factors that influence the severity of a Covid case are written into the genome. Recent studies suggest that people with type O blood, for example, might be at a slightly lower risk of becoming seriously sick with the coronavirus (though experts have cautioned against overinterpreting these types of findings). Other papers have homed in on genes that affect how cells sound the alarm about viruses, or raise their defenses to ward off invaders.

Still other genetic tweaks may make it easier for the coronavirus to break into cells. Some might even trigger an overzealous immune response to infection that damages healthy tissues alongside the sick ones — a common feature among the worst Covid-19 cases.

There even seems to be a measurable genetic influence on whether people experience symptoms like fever, fatigue and delirium when stricken with the coronavirus, said Tim Spector, an epidemiologist and the director of the TwinsUK registry based at St. Thomas’ Hospital in London. Last year, he and his colleagues developed a symptom tracking app to record how people dealt with the disease. In a study that has not yet been published in a scientific journal, they reported that genetic factors might account for up to 50 percent of the differences between Covid-19 symptoms. One gene that they are investigating codes for a molecule called ACE2, which the coronavirus docks onto before entering cells.

“It would be wrong to think we can answer this if we just crack the genes,” Dr. Spector said. Still, in at least some respects, the bodies of identical twins are “genetically programmed to be similar.” 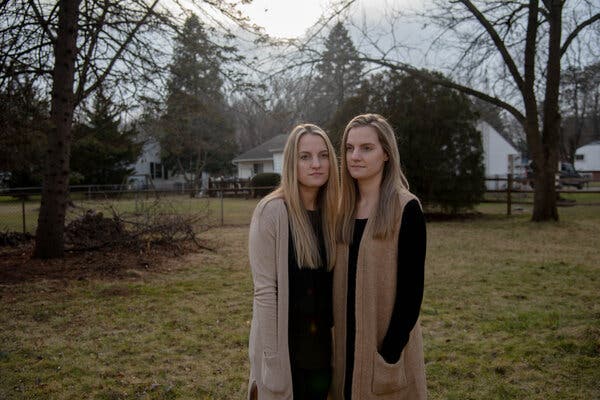 Kasey Miller, left, and Krista Burkett fell sick with Covid shortly after Thanksgiving. Their symptoms, though staggered by a week, were nearly identical.Credit…Cydni Elledge for The New York Times

Twins Krista Burkett and Kasey Miller, 28, of Toledo, Ohio, both fell ill shortly after Thanksgiving. Their sicknesses were staggered by about a week, hitting Ms. Miller first. But “day for day, it was exactly the same,” Ms. Burkett said.

For both sisters, Covid began with an hourlong fever of 99.5 degrees Fahrenheit, followed by days of back pain and a strange buzzing sensation. The eighth day crescendoed in an agonizing headache. Then, like clockwork, the symptoms disappeared.

The virus’s encore didn’t phase the twins. “Honestly, it was kind of nice for her,” Ms. Miller said of her sister. “She got to see exactly what would happen to her.”

What Ms. Burkett and Ms. Miller experienced wasn’t the norm. Many of the conditions that can raise a person’s risk for severe Covid — excess weight, heart disease, diabetes, smoking — are highly influenced by environment and behavior, not just genetics. A person’s history of fighting off other coronaviruses, like those that lead to common colds, might also affect their likelihood of developing a serious case of Covid.

Some researchers have also floated the idea that the amount of coronavirus a person takes in may have an impact on the severity of disease, a trend that has been documented with other infections.

“It’s the difference between having your immune system being actually able to squash the infection, or having a much harder time fighting it if all your cells become infected at the same time,” said Juliet Morrison, a virologist at the University of California, Riverside.

Michael Russell, 29, says he wonders if he sniffed up more of the virus than his twin brother, Steven, did this summer, in the days after they gathered with their family for the Fourth of July.

Both brothers began experiencing symptoms shortly after the celebrations ended, around the time Steven headed back to his home in Arlington, Va. The virus saddled Steven with a scratchy throat and a headache — a “light, cold-like” illness, he said.

A few days later, Michael, who was living at home with his parents, came down with much more severe symptoms: a sore throat, chills, shortness of breath and fatigue that relegated him to his bed for an entire day. About two weeks passed before he could smell or taste the cinnamon-dusted popcorn he regularly snacks on.

The twins’ parents came down with bad Covid symptoms as well, so Michael had to isolate with two other infected adults. Hunkering together in the same house may have exposed him to a larger dose of the virus, the brothers said. But, they added, that’s just a guess.

For some twin pairs, there are no obvious explanations for their differing disease course. Marena and Vivian Herr, 17-year-old identical twins in Jackson Hole, Wyo., have spent their entire lives near each other, bonding over their tastes for In-N-Out Burger and Taylor Swift.

“We share drinks, we hang out in each other’s rooms, we have the same friends,” Vivian said. But she and her sister never seem to catch the same sicknesses.

When the sisters both fell ill from Covid the week after attending a Halloween party, their symptoms forked: Marena lost her sense of taste and smell, neither of which have returned in the two months since, while Vivian battled a debilitating flulike illness.

Marena, left, and Vivian Herr. They each became sick with Covid around the same time but had different symptoms.Credit…Ash Ponders for The New York Times

Identical twins start as a single embryo that splits in two, creating carbon-copy babies-to-be. But from that time on, their developmental trajectories diverge, as their DNA accumulates small and often subtle, but unique, typos. A paper published this month in Nature Genetics reported that identical twins differ by an average of 5.2 early and naturally occurring developmental mutations.

Through childhood and adolescence, the biological chasm between twins deepens further as distinct microbes colonize their guts, or subtle shifts in the environment squish or stretch parts of their genomes, making certain segments harder or easier to read.

All of these changes and more can influence how a person responds to an infection, said Anita Pepper, a developmental biologist at The Wistar Institute in Philadelphia.

Even the DNA that cells start with is not set in stone. Certain immune cells called B cells and T cells are, in some ways, especially impervious to the genes they start with. Part of the job of these cells is to manufacture proteins, such as antibodies, that recognize pathogens that might do the body harm. The more of these suspicious shapes the cells and antibodies can find, the better a person can avert illness.

But it wouldn’t make sense to encode a separate gene for every possible iteration of an antibody — there are just too many. Instead, immune cells build their defensive repertoires through a process called recombination, which involves mixing and matching segments of DNA to create billions, trillions, even quadrillions of unique genetic stretches.

Marion Pepper, an immunologist at the University of Washington and the identical twin sister of Anita Pepper, compared the process to cobbling together words on a Scrabble board — a way to generate a diverse vocabulary without hauling a dictionary from place to place.

“Once those cells go out into the body, the hope is that you’ve created enough diversity that you can recognize everything,” Dr. Pepper said. “It’s brilliant.”

The randomness of these processes makes them just about impossible to replicate from person to person — even if all of the Scrabble tiles they start with are the same.

This immune malleability is an advantage, because it can equip the body to fend off even pathogens it has never seen before, said Mark Davis, an immunologist at Stanford University who has used his institution’s twin registry to conduct research on the genetics of the immune system. Twins may start with the same genetic ingredients, Dr. Davis said, but then “they roll the dice.”

Still other researchers have turned to twins to study another effect of the pandemic: a global fraying in psychological well-being. Emanuela Medda, a researcher with the Italian Twin Registry, is leading an effort to track stress, anxiety and depression among thousands of twins scattered countrywide. Continents away, John Hopper, an epidemiologist and director of Twins Research Australia, has undertaken a similar project monitoring how families are navigating a world altered by the coronavirus.

The pandemic has created its fair share of challenges, Dr. Hopper said. But early findings, collected via a series of surveys, offer a glimmer of hope: Amid the chaos, some people feel that hardship has brought them closer to their loved ones.

In Michigan, Kimberly and Kelly Standard recall their sicknesses last spring as one of the longest stretches they’ve ever spent apart. The first few days they spent in the hospital, the sisters would FaceTime each other from separate rooms — the best substitute they had for seeing each other in person.

Even after being released from care, Kelly struggled to put her mind at ease while Kimberly’s condition remained in flux. She came to dread the ring of her phone, knowing that each time the screen flashed the hospital’s 734 area code, it might bring news that her sister had died.

It took a few days after Kimberly awoke in intensive care before she could speak in more than a rasp. Left without her cellphone, she reached for the hospital phone and dialed her sister — the only person whose number she knew by heart.

When the Standard sisters finally saw each other again, they wept and wrapped each other in a tight embrace. It was a blessing, Kimberly said: “Finally, it felt like I was myself again.”