Former President Donald J. Trump and the Republican Party leveraged false claims of voter fraud and promises to overturn the election to raise more than a quarter-billion dollars in November and December as hundreds of thousands of trusting supporters listened and opened their wallets.

But the Trump campaign spent only a tiny fraction of its haul on lawyers and other legal bills related to those claims. Instead, Mr. Trump and the G.O.P. stored away much of the money — $175 million or so — even as they continued to issue breathless, aggressive and often misleading appeals for cash that promised it would help with recounts, the rooting out of election fraud and even the Republican candidates’ chances in the two Senate runoff races in Georgia.

What fraction of the money Mr. Trump did spend after the election was plowed mostly into a public-relations campaign and to keep his perpetual fund-raising machine whirring, with nearly $50 million going toward online advertising, text-message outreach and a small television ad campaign.

Only about $10 million spent by Mr. Trump’s campaign went to actual legal costs, according to an analysis of new Federal Election Commission filings from Nov. 4 through the end of the year.

Far more is now sitting in the coffers of a new political action committee, Save America, that Mr. Trump formed after the election and that provides him a fat war chest he can use to pay advisers, fund travel and maintain a political operation. Mr. Trump’s new PAC had $31 million in the bank at the end of 2020 and an estimated $40 million more sitting in a shared party account waiting to be transferred into it.

Mr. Trump’s extraordinary success raising money came mostly from grass-roots and online contributors drawn to his lie that the election result would soon be somehow wiped away. Only about a dozen donors gave $25,000 or more to one of Mr. Trump’s committees after Nov. 24. (The lone six-figure donation came from Elaine J. Wold, a major Republican donor in Florida.)

“Sophisticated donors are not dumb,” said Dan Eberhart, a major Republican donor who has supported Mr. Trump in the past. “They could see through what Trump was trying to do.”

A spokesman for Mr. Trump did not respond to a request for comment.

One of the few five-figure checks deposited in December came from the National Fraternal Order of Police PAC. But its executive director, James Pasco, said the group had actually issued the $25,000 donation in early November. He said he did not know why it hadn’t been cashed until December.

“The optics of this are terrible,” Mr. Pasco lamented. “We in no way questioned the election at any point, or were involved in an effort to forestall the results.”

Still, many Republican grass-roots donors were drawn in by Mr. Trump’s false promises and “stop the steal” message. He fomented intense opposition to the inauguration of President Biden, which eventually culminated in the Jan. 6 riot at the Capitol as flag-waving Trump supporters violently sought to disrupt the certification of Mr. Biden’s victory.

All told, more than two million donations flowed to the former president and his shared committees with the Republican National Committee from Nov. 24 to the end of the year. Mr. Trump’s fund-raising did stall drastically after the Electoral College certified Mr. Biden as the winner on Dec. 14.

In the two weeks leading up to that day, Mr. Trump and the R.N.C. had raised an average of $2.9 million every day online; in the two weeks after, the average was $1.2 million, according to records from WinRed, the Republican digital donation platform.

Despite that slowdown, Mr. Trump still outpaced the online fund-raising of the two Republican senators, Kelly Loeffler and David Perdue, who were competing in the Georgia runoff elections that would determine control of the chamber in the last 39 days of the year, which the most recent federal filings cover.

Mr. Trump and his shared committees with the R.N.C. raised $80 million online during that period; Ms. Loeffler and Mr. Perdue combined for closer to $75 million. Both Senate candidates lost.

“Absolutely that money was misdirected,” Mr. Eberhart said. “I would have loved to see half that money go to the Georgia Senate races.”

Mr. Trump’s campaign appears to have contributed nothing to the Georgia races, despite fund-raising appeals that emphasized the importance of the races; the R.N.C. reported $7.9 million in expenditures aiding Ms. Loeffler and Mr. Perdue.

A host of corporations and major donors mostly ignored Mr. Trump in the weeks after the election and poured money instead into the Georgia runoffs. Donations included a $5 million check from the American Petroleum Institute and hundreds of thousands more from oil giants like Chevron and Valero, which were fearful of the impact of a Democratic-controlled Senate. 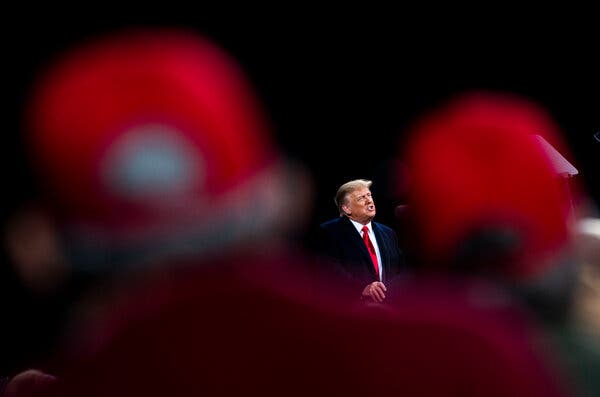 Mr. Trump spoke at a campaign rally in Valdosta, Ga., in December. His campaign appears to have contributed nothing to the Georgia Senate runoffs.Credit…Doug Mills/The New York Times

Kenneth Griffin, the chief executive of the financial firm Citadel, donated $10 million to the main Senate Republican super PAC in November. Mr. Griffin’s firm now faces scrutiny for some of its investments related to the GameStop stock that soared last month in a Reddit-driven populist revolt.

Stephen A. Schwarzman, the chief executive of the private equity giant Blackstone, who has known Mr. Trump for decades and donated to him in the past, said publicly by mid-November that Mr. Biden had most likely won. Around that time, he gave $15 million to the same Senate Republican super PAC focused on Georgia.

“The outcome is very certain today, and the country should move on,” Mr. Schwarzman said in late November.

Mr. Trump did incur some legal costs, though there were no disclosed payments to some of the best-known figures in his failed legal fight, including Sidney Powell, the lawyer who spread conspiracy theories and held one news conference in the lobby of the R.N.C., and Rudolph W. Giuliani, the former president’s personal lawyer.

Mr. Giuliani’s firm was reimbursed for $63,423 in travel in mid-December. (Another firm run by an ally of Mr. Giuliani, the former New York police commissioner Bernard B. Kerik, was also paid $20,130 in travel reimbursements; Mr. Trump pardoned Mr. Kerik last year for his 2010 conviction on eight felonies.)

All told, the Trump campaign paid more than a dozen law firms, including $1.6 million to Kasowitz Benson Torres, more than $500,000 to Jones Day and about $600,000 to Dechert. The law firm of Kurt Hilbert, who was on Mr. Trump’s phone call pressuring the Republican secretary of state in Georgia, Brad Raffensperger, to “find” votes to overturn the election outcome, was paid more than $480,000. A $3 million payment went to the Wisconsin Elections Commission to pay for a recount.

The Trump operation continued to spend on fund-raising, pouring millions into a secretive limited liability company, American Made Media Consultants, for online and text-message advertising. Family members of Mr. Trump and Vice President Mike Pence once served on the board of the company, which had more than $700 million in spending flow through it during the 2020 campaign.

In the postelection period, more than $63 million in spending flowed through the company from committees linked to Mr. Trump.

The Republican National Committee ended the year with more than $80 million in the bank after the fund-raising blitz, and the party is entitled to a share of the $63 million more in two shared accounts with Mr. Trump. Per an agreement, the R.N.C. collected 25 cents for every dollar Mr. Trump raised online through their joint account in December.

One of Mr. Trump’s shared committees with the R.N.C. spent $237,000 on books through a company, Reagan Investments, that has also done work for a PAC controlled by Senator Ted Cruz of Texas. The Trump campaign offered signed copies of a book by Mr. Cruz last fall to donors who gave $75 or more.

And, as they have since the beginning of his candidacy in 2015, Mr. Trump’s campaign accounts patronized his businesses in the postelection period.

The Trump Victory committee paid $34,000 to the Trump Hotel Collection in its final 2020 filing. The same committee also paid a Trump-owned limited liability company that operates a private plane, DT Endeavor, $39,200 on Nov. 24.

Another Trump campaign committee paid $75,000 in rent to the Trump Tower building in December.