Sign up here to get On Politics in your inbox every weekday. 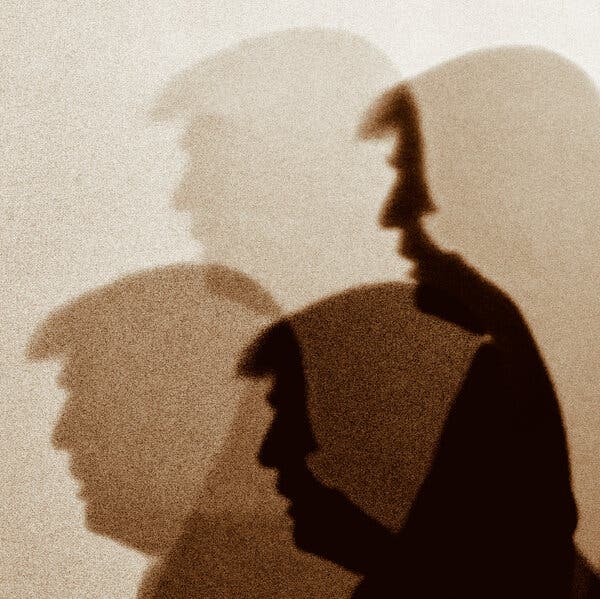 In the days after the attack on the Capitol, hopes began rising among some Republicans that their party would make a clean break from Donald J. Trump once he was no longer president.

The speculation wasn’t all the fault of Twitter punditry: Even Mitch McConnell, the Senate majority leader at the time, seemed to stoke the idea, carefully nudging his party toward an impeachment trial.

Well, Mr. Trump has now left Washington. And, yet, Republicans remain scared of his shadow.

As the former president putts around Mar-a-Lago, the vast majority of his party has stayed faithful to his lingering political legacy.

The Senate hasn’t even begun Mr. Trump’s second impeachment trial and an acquittal already appears preordained. This week, 45 of 50 Republicans in the Senate backed an objection raised by Senator Rand Paul, Republican of Kentucky, arguing that trying an ex-president would be unconstitutional — essentially trying to invalidate the entire process.

The party’s rush to judgment is even more surprising given that Senate Republicans are all witnesses, as well as jurors, in this trial. Most were in the chamber during the attack, eventually fleeing to shelter within the Capitol complex. A few could even be considered co-defendants for stoking the baseless claims about election fraud that incited the riot.

Of course, new information about the attacks could emerge, prompting Senate Republicans to change their mind about the former president’s culpability. But while the country still reels from the bitter division, baseless claims and armed militias that marked the last election, politicians have already begun casting their eyes to the next one.

In the House, the 10 Republicans who supported impeachment face primary challenges, censures and other rebukes from their party. Others who offered mild criticism of Mr. Trump’s role in the attack are now trying to hustle their way back into his good graces. Representative Kevin McCarthy, the House minority leader and a staunch Trump ally, notably added a stop at Mar-a-Lago to his schedule during a fund-raising swing through Palm Beach, Fla. — an effort to try to repair his relationship with the former president.

A third group is expected to opt out of the dance all together. Some senior Republicans worry that Senator Rob Portman’s surprise announcement that he would not seek a third term in Ohio could be a harbinger, as more mainstream members grow weary of navigating the G.O.P.’s rightward shift. As Mr. Portman put it: “This is a tough time to be in public service.”

There was always reason to be skeptical of the idea that the right would sever its ties to the divisiveness and conspiracy mongering that defined Mr. Trump’s tenure. Mr. Trump conquered not only the presidency but also Republicanism, shifting the ideology of the party and taking over large swaths of the national, state and local infrastructure. Trumpism, after all, is largely an extension of his unique blend of populist impulses, resentment politics and cultural division. Even if a number of Republicans in Congress turned their backs on the former president, their party would remain behind him.

So far, that’s what seems to be happening: Recent polling by Monmouth University found the party standing firmly behind the former president, with 72 percent of Republicans still attributing President Biden’s victory to voter fraud.

There’s little sign of any effort from Republican elected officials to try to unwind the damage done by that kind of conspiratorial thinking. In Washington, Republicans seem more focused on attacking those who break with Mr. Trump, than members who continue to push violent conspiracy theories that flourished under his leadership.

“Cut the crap,” Mr. McCarthy warned his members in a phone call this week, as some in his caucus were trying to oust Representative Liz Cheney, Republican of Wyoming, who voted to impeach Mr. Trump, from her leadership position.

Notably, there’s been no similar effort to eject Representative Marjorie Taylor Greene of Georgia, who was vocal about her support for the pro-Trump QAnon conspiracy theory, after news broke that she repeatedly indicated support for executing prominent Democratic politicians and mocked the killing of students in school shootings.

A short-term decision to accommodate Mr. Trump and his baseless charges may not define the party’s fortunes in the long run.

There’s plenty that will happen over the next two years and it’s impossible to predict how much votes on impeachment today will matter tomorrow. But clearly, most Republicans are eager to send some early signals to their base and one newly retired Floridian.

Drop us a line!

We want to hear from our readers. Have a question? We’ll try to answer it. Have a comment? We’re all ears. Email us at [email protected] or follow me on Twitter at @llerer

Representative Jim Jordan of Ohio, who was Mr. Trump’s foremost defender in his House impeachment proceedings, has decided not to run for an open seat being vacated by the retirement of Mr. Portman, in 2022, an aide said Thursday.

“Mr. Jordan believes that at this time he is better suited to represent Ohioans in the House of Representatives, where, as the top Republican on the Judiciary Committee, he can advance an America first agenda, promote conservative values and hold big government accountable,” Russell Dye, a spokesman for Mr. Jordan’s congressional campaign, said.

Mr. Jordan’s high-profile defense of Mr. Trump made him widely considered to be the Republican with the best chance to win Ohio’s 2022 Senate primary. While more than a half-dozen other Ohio Republicans are weighing Senate bids to replace Mr. Portman, none has the national profile or Trump bona fides of Mr. Jordan, who received the Presidential Medal of Freedom five days after the Jan. 6 riot at the Capitol.

Mr. Jordan has long had ambitions to lead House Republicans and has hoped to become speaker if his party takes a majority in the chamber after the 2022 elections. But the conservative firebrand lost a bid for minority leader to Representative Kevin McCarthy of California following the 2018 elections.

Mr. Jordan’s decision not to run was first reported by The Plain Dealer of Cleveland.

Ohio Democrats who have expressed interest in running for the Senate include Representative Tim Ryan, who was among the early field of candidates vying to unseat Mr. Trump in 2020; Mayor Nan Whaley of Dayton, who is also considering running for governor in 2022; and Dr. Amy Acton, the former director of the Ohio Department of Health, who received encouragement on Twitter from Connie Schultz, the wife of Ohio’s other senator, Sherrod Brown.

Mr. Portman is one of three Republican senators who has said he will not seek re-election in 2022. Senators Patrick J. Toomey of Pennsylvania and Richard M. Burr of North Carolina are also retiring, leaving the party to defend three seats in what are expected to be competitive states next year. That list could grow. Senator Ron Johnson of Wisconsin has not yet said whether he will seek a third term, nor have Senators Chuck Grassley of Iowa, who is 87, or Richard Shelby of Alabama, who is 86.

Senators Mark Kelly of Arizona and Raphael Warnock of Georgia — two Democrats who joined the chamber after winning special elections — will face voters again in 2022 for full six-year terms.

By the numbers: 54 percent

… That’s the percentage of Americans who approve of Mr. Biden’s performance at the start of his term, according to a survey by Monmouth University.

What do you wear in -54°F? One little girl has the answer!

Thanks for reading. On Politics is your guide to the political news cycle, delivering clarity from the chaos.

On Politics is also available as a newsletter. Sign up here to get it delivered to your inbox.

Is there anything you think we’re missing? Anything you want to see more of? We’d love to hear from you. Email us at [email protected].