WASHINGTON — The House impeachment managers issued a surprise request on Thursday for Donald J. Trump to testify in his Senate trial next week, making a long-shot attempt to question the former president under oath about his conduct on the day of the Capitol riot. It was quickly rejected by his lawyers.

In a letter to Mr. Trump, Representative Jamie Raskin, the lead House impeachment prosecutor, said the former president’s response this week to the House’s charge that he incited an insurrection on Jan. 6 had disputed crucial facts about his actions, and demanded further explanation.

“Two days ago, you filed an answer in which you denied many factual allegations set forth in the article of impeachment,” wrote Mr. Raskin, Democrat of Maryland. “You have thus attempted to put critical facts at issue notwithstanding the clear and overwhelming evidence of your constitutional offense.”

He proposed interviewing Mr. Trump “at a mutually convenient time and place” between Monday and Thursday. The trial is set to begin on Tuesday.

But Mr. Trump’s lawyers, Bruce L. Castor Jr. and David Schoen, wasted little time in swatting away the invitation. They said that Mr. Trump wanted no part of a proceeding they insisted was “unconstitutional” because he is no longer in office, and called Mr. Raskin’s request a “public relations stunt.”

“Your letter only confirms what is known to everyone: You cannot prove your allegations against the 45th president of the United States, who is now a private citizen,” they wrote in a letter to Mr. Raskin.

Mr. Schoen and another adviser to Mr. Trump, Jason Miller, later clarified that the former president did not plan to testify voluntarily before or after the trial begins. Instead, his defense team intends to argue that the case should be dismissed outright on constitutional grounds, and that Mr. Trump is not guilty of the bipartisan “incitement of insurrection” charge in which the House asserts he provoked a mob with baseless voter fraud claims to attack the Capitol in a bid to stop Congress from formalizing his loss.

The decision, if it holds, is likely to be helpful for both sides. With Senate Republicans already lining up to acquit Mr. Trump for the second time in just over a year, testimony from a famously impolitic former president who continues to insist falsely that he won the election risks jeopardizing his defense.

Democrats might have benefited from Mr. Trump’s testimony, but his silence also allows the House managers to tell senators sitting in judgment that they at least gave Mr. Trump an opportunity to have his say. Perhaps more important, they quickly claimed — despite the defense’s protests — that his refusal established an “adverse inference supporting his guilt,” meaning that they would cite his silence as further proof that their allegations are true.

“Despite his lawyers’ rhetoric, any official accused of inciting armed violence against the government of the United States should welcome the chance to testify openly and honestly — that is, if the official had a defense,” Mr. Raskin said in a statement Thursday evening. “We will prove at trial that President Trump’s conduct was indefensible.”

Mr. Raskin could still try to subpoena testimony from Mr. Trump during the trial. But doing so would require support from a majority of the Senate and could prompt a messy legal battle over claims of executive privilege that could take weeks or longer to unwind, snarling the agenda of President Biden and Democrats. Members of both parties already pressing for a speedy trial signaled skepticism on Thursday to calling Mr. Trump.

“I think it’s a terrible idea,” Senator Chris Coons, Democrat of Delaware and one of Mr. Biden’s closest allies, said of Mr. Trump taking the witness stand. Asked to clarify his reasoning, he replied, “Have you met President Trump?”

“I don’t think that would be in anybody’s interest,” said Senator Lindsey Graham of South Carolina, one of the president’s allies. “It’s just a nightmare for the country to do this.” 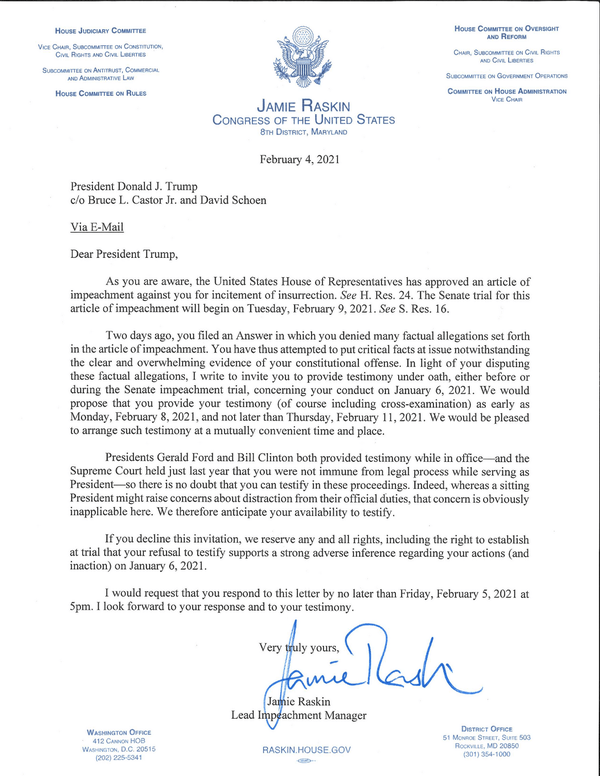 Read the Letter Calling on Trump to Testify

In a letter to former President Donald J. Trump, the lead House impeachment prosecutor said Mr. Trump’s response this week to the House’s charge had challenged “overwhelming evidence” about his conduct as the assault unfolded, and demanded further explanation.

The managers said their invitation for Mr. Trump to testify was prompted primarily by his lawyers’ official response to the impeachment charge, filed with the Senate on Tuesday. In it, Mr. Trump’s lawyers flatly denied that he incited the attack or meant to disrupt Congress’s counting of electoral votes, despite Mr. Trump’s clear and stated focus on using the process to overturn the results. They also denied that a speech to a throng of his supporters just before the attack in which Mr. Trump urged the crowd to go to the Capitol and “fight like hell” against the election results, suggesting that Republican lawmakers and Vice President Mike Pence had the power to change the outcome, “had anything to do with the action at the Capitol.”

Mr. Trump’s team argued that the former president could not be culpable for those statements, or for the falsehoods he spread about election fraud, because they were protected by First Amendment rights given that he believes that he was the true winner.

In his letter and subsequent statement, Mr. Raskin did not indicate whether he intended to try to subpoena testimony from Mr. Trump or any other witnesses when the trial begins.

The question has proved a difficult one for the nine House managers. Because they moved quickly to impeach Mr. Trump only a week after the attack, they did no meaningful fact-finding before charging him, leaving holes in their evidentiary record. One of the most notable has to do with how precisely Mr. Trump conducted himself when it became clear the Capitol was under assault on Jan. 6.

The president sent several tweets sympathizing with the mob and calling for peace during that time, but as the House managers made clear in their 80-page trial brief filed with the Senate this week, they possess little more direct evidence of how Mr. Trump responded. Instead they rely on news reports and accounts by lawmakers who desperately tried to reach him to send in National Guard reinforcements, which have suggested that he was “delighted” by the invasion.

Testimony by Mr. Trump or other White House or military officials could clarify that. But in this case, a greater understanding would almost certainly prolong the trial by weeks or longer. Republicans are averse to an extended airing of Mr. Trump’s conduct, but for Democrats, the cost would be steep to their ambitions to pass coronavirus relief legislation and install the remainder of Mr. Biden’s cabinet — with very little chance of ultimately changing the verdict of the trial.

Senator Chuck Schumer, Democrat of New York and the majority leader, with whom the decision will most likely rest, has indicated would be comfortable proceeding without witnesses.

“We will move forward with a fair and speedy trial,” he said on Thursday. “The House managers will present their case. The former president’s counsel will mount a defense, and senators will have to look deep into their consciences and determine if Donald Trump is guilty, and if so, ever qualified again to enjoy any office of honor, trust or profit under the United States.”

The calculus for Mr. Trump’s legal team is far simpler. In addition to alienating Republican senators reluctant to convict a former president who remains so popular in their party, Mr. Trump could put himself in legal jeopardy if he testified. He has a penchant for stating falsehoods, and it is a federal felony to do so before Congress.

Mr. Schoen accused Democrats in the House and Senate of running an unfair proceeding. He said they had yet to share even basic rules, like how long the defense would have to present its case.

“I don’t think anyone being impeached would show up at the proceedings we firmly believe are unconstitutional,” Mr. Schoen said in a text message.

He and Mr. Castor also rejected Mr. Raskin’s reasoning that Mr. Trump’s failure to testify would bolster their argument that he is guilty.

“As you certainly know,” they wrote, “there is no such thing as a negative inference in this unconstitutional proceeding.”

But the managers also appeared to be appealing, at least in part, to Mr. Trump’s impulse for self-defense, betting that he might defy his lawyers’ guidance not to speak. Throughout Mr. Trump’s presidency — first during the Russia investigation and then in his first impeachment inquiry — he was eager to tell his side of the story, convinced that he was his own best spokesman.

During the investigation by the special counsel, Robert S. Mueller III, Mr. Trump insisted to his legal team that he wanted to sit and answer prosecutors’ questions. That desire unnerved his lawyers, who believed that Mr. Trump would almost certainly make some sort of false statement and face greater legal consequences. One member of his legal team quit over the issue.

Ultimately, Mr. Mueller declined to seek a subpoena for Mr. Trump’s testimony and accepted written responses from him that later prompted the special counsel to question whether Mr. Trump had been truthful.