WASHINGTON — After a Texas judge last week temporarily blocked President Biden’s order to pause deportations for 100 days, immigration agents did not hesitate to use the brief window to defy the incoming president’s new tone.

Immigration and Customs Enforcement agents moved a 40-year-old Cameroonian asylum seeker to a facility in Louisiana and prepared to deport him, despite his claims of torture in his home country.

“This is not what the Biden administration stands for,” Henry Hollithron, the man’s lawyer, said in an interview. “That is definitely a holdover from the Trump era.”

President Donald J. Trump often complained about what he called a “deep state” inside the government working to thwart his agenda. But Mr. Biden and his secretary of homeland security, Alejandro N. Mayorkas, are already encountering their own pockets of internal resistance, especially at the agencies charged with enforcing the nation’s immigration laws, where the gung-ho culture has long favored the get-tough policies that Mr. Trump embraced.

Mr. Mayorkas, who was confirmed on Tuesday after a nearly two-week delay by Republicans unhappy about his immigration views, will find a Department of Homeland Security transformed since he was its deputy secretary in the Obama administration. Liberal immigration activists and former Trump administration officials rarely agree on much, but both parties say Mr. Mayorkas will struggle to get buy-in for Mr. Biden’s immigration agenda from the thousands of border and immigration agents in his sprawling, 240,000-person department.

“There are people in ICE that agree with Trump’s policies.,” said Tom Homan, an immigration hard-liner who served as Mr. Trump’s ICE director. “They want to do the job they took an oath to do.”

Aaron Reichlin-Melnick, the policy counsel the American Immigration Council, which advocates on behalf of immigrants, agreed that after “four years of a newly empowered and politicized work force,” ICE and Customs and Border Protection agents are “more likely to push back against an incoming administration than in the past.”

Mr. Biden campaigned on bringing accountability to the government’s immigration agencies, but he is already facing a daunting challenge in overhauling a department that was unmatched in how closely it aligned with Mr. Trump.

Videos celebrating Mr. Trump’s “big, beautiful” border wall are still featured on the Customs and Border Protection website. A fictionalized video by the agency that shows Mr. Trump’s depiction of migrants as feared criminals is still on the Border Patrol’s official social media channels. And the union representing ICE agents — whose top leaders were enthusiastic supporters of Mr. Trump — has signaled that it does not intend to accept all of the new administration’s reversals of his policies.

Those agents may have gotten a lift in the waning days of Mr. Trump’s administration, when Trump loyalists tried to codify the influence of those unions. The day before Mr. Biden’s inauguration, union leaders signed a labor agreement with Kenneth T. Cuccinelli II, an immigration hard-liner and the acting deputy secretary of the Department of Homeland Security, that requires ICE’s political leadership to consult with the union on policy decisions.

If the agreement stands, it could undercut Mr. Biden’s directives to the enforcement agency, including guidance that took effect on Monday requiring ICE officers to focus arrests on violent offenders.

“They are not going to be able to get people to change their deeply held convictions,” Stephen Miller, the architect of Mr. Trump’s immigration policies, said of many career officials at the Homeland Security Department. “They are going to make painfully clear to the politicals what the consequences are going to be if their advice is not followed.”

The emergence of an emboldened resistance inside the Biden administration is not limited to the homeland security agencies. Pockets of government employees loyal to Mr. Trump and his agenda remain ensconced in other parts of the bureaucracy.

Andrew Veprek, an ally of Mr. Miller’s and once the deputy assistant secretary of state for refugees and migration, has been succeeded by a veteran of President Barack Obama’s administration. But Mr. Veprek, a career Foreign Service officer, has returned to the State Department.

Michael Ellis, a Trump loyalist, was named as the top lawyer for the National Security Agency in the days before Mr. Biden took office. He has been put on administrative leave while his appointment is investigated, but he remains an employee of the agency. And at the Justice Department, there are still career lawyers who defended many of Mr. Trump’s policies, including the separation of families at the border.

Not everyone working for Mr. Mayorkas will reject the new approach.

Some officials in the Homeland Security Department grew frustrated at the revolving door of acting leadership within the agencies under Mr. Trump’s administration. And one division of ICE that investigates longer-term cases into traffickers and terrorists even asked to separate from the immigration agency so it would not be connected to Mr. Trump’s effort to crack down on undocumented immigrants.

Shortly after he was confirmed on Tuesday afternoon, Mr. Mayorkas wrote to his employees pledging his support and relaying his expectations. “We will act with integrity and humility,” Mr. Mayorkas said in an email obtained by The New York Times. “We will be open, transparent and accountable.” 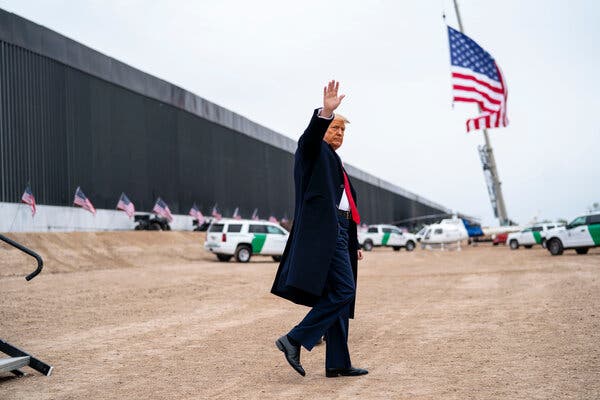 President Donald J. Trump at the border wall before he left office. Pockets of employees loyal to Mr. Trump and his agenda remain ensconced in parts of the government.Credit…Doug Mills/The New York Times

Mr. Homan said morale at the agency had been “flushed down the toilet” since Mr. Biden began issuing executive orders in the past two weeks, and he predicted that some in the bureaucracy would seek to undermine the new president.

“That’s the way everybody attacked the Trump administration, by leaking things,” Mr. Homan said. “People now are taking a page out of that playbook. I think turnaround is fair play.”

It is already happening. Shortly after Mr. Biden’s Homeland Security Department issued a memo establishing new enforcement priorities and pausing deportations, an internal email sent to an ICE field office in Houston ended up on Fox News. The email suggested that some immigrants in custody should be released; it set off a firestorm on conservative news media. (Mr. Biden has not issued a directive to release immigrant detainees).

Mr. Miller predicted that homeland security officials who oppose Mr. Biden’s policies would put their concerns into writing as a way of documenting them for future legal challenges that conservative activists are certain to file.

Mr. Reichlin-Melnick, whose organization has challenged Mr. Trump’s policies in the court system, said it would be critical for Mr. Mayorkas and Mr. Biden to ensure that their directives were actually followed by the rank and file in the department.

“The next month or two are really going to be formative for the administration,” he said.

That might be too long for some immigrants. ICE deported nearly 350 undocumented immigrants to Guatemala, Honduras and El Salvador on Friday, the agency said in a statement.

In a letter to the Homeland Security Department, Representative Jerrold Nadler of New York, the chairman of the House Judiciary Committee, said the action “raises serious questions about the agency’s commitment to adhering to its own policy directives.”

He traveled to Central America and journeyed north, arriving at the United States border in June 2019, where he was subjected to Mr. Trump’s “metering” rule, which limited the number of migrants a day who could ask for protections at border entry points.

He has been detained since September 2019. While an immigration judge rejected his plea for asylum last year, citing the need for more evidence to his claims, Mr. Hollithron was still fighting the case in court and filed an emergency stay last Sunday on his client’s removal.

But that order is just temporary. The future of Mr. Hollithron’s client remains uncertain.

“It’s going to take time until the administration comes down and does a top-down examination,” Mr. Hollithron said.