WASHINGTON — The Justice Department’s top leaders listened in stunned silence this month: One of their peers, they were told, had devised a plan with President Donald J. Trump to oust Jeffrey A. Rosen as acting attorney general and wield the department’s power to force Georgia state lawmakers to overturn its presidential election results.

The unassuming lawyer who worked on the plan, Jeffrey Clark, had been devising ways to cast doubt on the election results and to bolster Mr. Trump’s continuing legal battles and the pressure on Georgia politicians. Because Mr. Rosen had refused the president’s entreaties to carry out those plans, Mr. Trump was about to decide whether to fire Mr. Rosen and replace him with Mr. Clark.

The department officials, convened on a conference call, then asked each other: What will you do if Mr. Rosen is dismissed?

The answer was unanimous. They would resign.

Their informal pact ultimately helped persuade Mr. Trump to keep Mr. Rosen in place, calculating that a furor over mass resignations at the top of the Justice Department would eclipse any attention on his baseless accusations of voter fraud. Mr. Trump’s decision came only after Mr. Rosen and Mr. Clark made their competing cases to him in a bizarre White House meeting that two officials compared with an episode of Mr. Trump’s reality show “The Apprentice,” albeit one that could prompt a constitutional crisis.

The previously unknown chapter was the culmination of the president’s long-running effort to batter the Justice Department into advancing his personal agenda. He also pressed Mr. Rosen to appoint special counsels, including one who would look into Dominion Voting Systems, a maker of election equipment that Mr. Trump’s allies had falsely said was working with Venezuela to flip votes from Mr. Trump to Joseph R. Biden Jr.

This account of the department’s final days under Mr. Trump’s leadership is based on interviews with four former Trump administration officials who asked not to be named because of fear of retaliation.

Mr. Clark also noted that he was the lead signatory on a Justice Department request last month asking a federal judge to reject a lawsuit that sought to pressure Vice President Mike Pence to overturn the results of the election.

Mr. Trump declined to comment. An adviser said that Mr. Trump has consistently argued that the justice system should investigate “rampant election fraud that has plagued our system for years.”

The adviser added that “any assertion to the contrary is false and being driven by those who wish to keep the system broken.”

A Justice Department spokesman declined to comment, as did Mr. Rosen.

When Mr. Trump said on Dec. 14 that Attorney General William P. Barr was leaving the department, some officials thought that he might allow Mr. Rosen a short reprieve before pressing him about voter fraud. After all, Mr. Barr would be around for another week.

Instead, Mr. Trump summoned Mr. Rosen to the Oval Office the next day. He wanted the Justice Department to file legal briefs supporting his allies’ lawsuits seeking to overturn his election loss. And he urged Mr. Rosen to appoint special counsels to investigate not only unfounded accusations of widespread voter fraud, but also Dominion, the voting machines firm.

(Dominion has sued the pro-Trump lawyer Sidney Powell, who inserted those accusations into four federal lawsuits about voter irregularities that were all dismissed.)

Mr. Rosen refused. He maintained that he would make decisions based on the facts and the law, and he reiterated what Mr. Barr had privately told Mr. Trump: The department had investigated voting irregularities and found no evidence of widespread fraud.

But Mr. Trump continued to press Mr. Rosen after the meeting — in phone calls and in person. He repeatedly said that he did not understand why the Justice Department had not found evidence that supported conspiracy theories about the election that some of his personal lawyers had espoused. He declared that the department was not fighting hard enough for him.

As Mr. Rosen and the deputy attorney general, Richard P. Donoghue, pushed back, they were unaware that Mr. Clark had been introduced to Mr. Trump by a Pennsylvania politician and had told the president that he agreed that fraud had affected the election results. 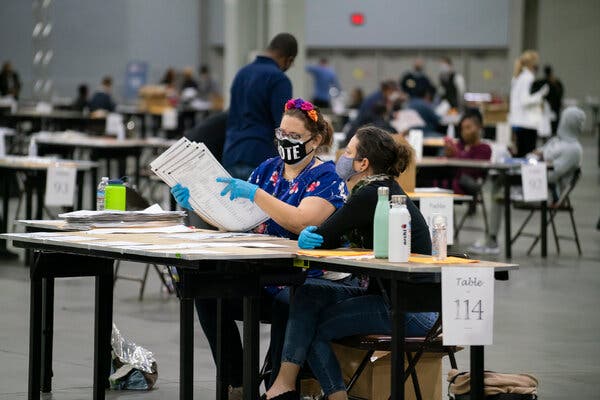 Election workers performing a recount in Atlanta in November. Mr. Trump focused on Georgia’s election outcome after he lost the state.Credit…Nicole Craine for The New York Times

Mr. Trump quickly embraced Mr. Clark, who had been appointed the acting head of the civil division in September and was also the head of the department’s environmental and natural resources division.

As December wore on, Mr. Clark mentioned to Mr. Rosen and Mr. Donoghue that he spent a lot of time reading on the internet — a comment that alarmed them because they inferred that he believed the unfounded conspiracy theory that Mr. Trump had won the election. Mr. Clark also told them that he wanted the department to hold a news conference announcing that it was investigating serious accusations of election fraud. Mr. Rosen and Mr. Donoghue rejected the proposal.

As Mr. Trump focused increasingly on Georgia, a state he lost narrowly to Mr. Biden, he complained to Justice Department leaders that the U.S. attorney in Atlanta, Byung J. Pak, was not trying to find evidence for false election claims pushed by Mr. Trump’s lawyer Rudolph W. Giuliani and others. Mr. Donoghue warned Mr. Pak that the president was now fixated on his office, and that it might not be tenable for him to continue to lead it, according to two people familiar with the conversation.

That conversation and Mr. Trump’s efforts to pressure Georgia’s Republican secretary of state to “find” him votes compelled Mr. Pak to abruptly resign this month.

Mr. Clark was also focused on Georgia. He drafted a letter that he wanted Mr. Rosen to send to Georgia state legislators that wrongly said that the Justice Department was investigating accusations of voter fraud in their state, and that they should move to void Mr. Biden’s win there.

On New Year’s Eve, the trio met to discuss Mr. Clark’s refusal to hew to the department’s conclusion that the election results were valid. Mr. Donoghue flatly told Mr. Clark that what he was doing was wrong. The next day, Mr. Clark told Mr. Rosen — who had mentored him while they worked together at the law firm Kirkland & Ellis — that he was going to discuss his strategy with the president early the next week, just before Congress was set to certify Mr. Biden’s electoral victory.

Unbeknown to the acting attorney general, Mr. Clark’s timeline moved up. He met with Mr. Trump over the weekend, then informed Mr. Rosen midday on Sunday that the president intended to replace him with Mr. Clark, who could then try to stop Congress from certifying the Electoral College results. He said that Mr. Rosen could stay on as his deputy attorney general, leaving Mr. Rosen speechless.

Unwilling to step down without a fight, Mr. Rosen said that he needed to hear straight from Mr. Trump and worked with the White House counsel, Pat A. Cipollone, to convene a meeting for early that evening.

Even as Mr. Clark’s pronouncement was sinking in, stunning news broke out of Georgia: State officials had recorded an hourlong call, published by The Washington Post, during which Mr. Trump pressured them to manufacture enough votes to declare him the victor. As the fallout from the recording ricocheted through Washington, the president’s desperate bid to change the outcome in Georgia came into sharp focus.

Mr. Rosen planned to soon head to the White House to discuss his fate, Mr. Donoghue told the group. Should Mr. Rosen be fired, they all agreed to resign en masse. For some, the plan brought to mind the so-called Saturday Night Massacre of the Nixon era, where Attorney General Elliot L. Richardson and his deputy resigned rather than carry out the president’s order to fire the special prosecutor investigating him.

The Clark plan, the officials concluded, would seriously harm the department, the government and the rule of law. For hours, they anxiously messaged and called one another as they awaited Mr. Rosen’s fate.

Around 6 p.m., Mr. Rosen, Mr. Donoghue and Mr. Clark met at the White House with Mr. Trump, Mr. Cipollone, his deputy Patrick Philbin and other lawyers. Mr. Trump had Mr. Rosen and Mr. Clark present their arguments to him.

Mr. Cipollone advised the president not to fire Mr. Rosen and he reiterated, as he had for days, that he did not recommend sending the letter to Georgia lawmakers. Mr. Engel advised Mr. Trump that he and the department’s remaining top officials would resign if he fired Mr. Rosen, leaving Mr. Clark alone at the department.

Mr. Trump seemed somewhat swayed by the idea that firing Mr. Rosen would trigger not only chaos at the Justice Department, but also congressional investigations and possibly recriminations from other Republicans and distract attention from his efforts to overturn the election results.

Mr. Rosen and his deputies concluded they had weathered the turmoil. Once Congress certified Mr. Biden’s victory, there would be little for them to do until they left along with Mr. Trump in two weeks.

They began to exhale days later as the Electoral College certification at the Capitol got underway. And then they received word: The building had been breached.