HOLYHEAD, Wales — Beneath swirling gray clouds, Bryan Anderson leaned from the cab window of his truck to vent his frustration at the new paperwork that had already delayed his journey through Britain’s second-largest ferry port by half a day.

“It’s a nightmare,” Mr. Anderson said, explaining how he spent hourswaiting at a depot 250 miles away for export documents required because of Brexit. The delay meant he reached Holyhead, in Wales, too late for the ferry he planned to take to Dublin, and for the next one, too.

“I am roughly 12 hours behind schedule,” he said as he prepared, finally, to drive aboard the Stena Adventurer to Dublin to drop off a consignment of parcels for Ireland’s mail service.

Fear of hassles and red tape stemming from the introduction of the new rules governing Britain’s trade with the European Union that came into effect on Jan. 1 led to dire predictions of overwhelming gridlock at British ports.

But, so far, the opposite has happened. Apart from hardy souls like Mr. Anderson, truckers are increasingly shunning ports like Holyhead. They are fearful of the mountains of paperwork now required for journeys that last month involved little more than driving on to a ferry in one country and off it in another. 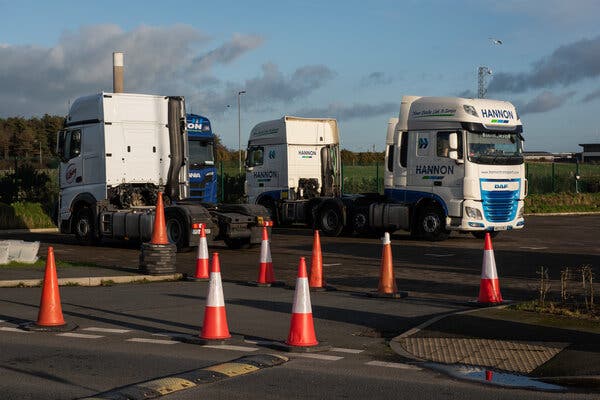 Truck cabs waiting in Holyhead to pick up trailers coming across on the ferry from Dublin. Credit…Phil Hatcher-Moore for The New York Times

On Thursday, just a couple of dozen other trucks stood waiting for the same ferry as Mr. Anderson in a vast but almost empty port-side parking lot. Holyhead is operating at half its normal capacity and staff have been placed on furlough.

“It’s too much hassle to go through,” Mr. Anderson said.

After months of uncertainty and tense negotiations, Prime Minister Boris Johnson finally struck a trade deal with the European Union on Christmas Eve. So when Britain left Europe’s single market and customs union on Jan. 1, it avoided the chaos seen during a dress-rehearsal border closure by French officials in December.

Yet the old system that allowed frictionless travel to and from European nations is over. Despite claims by its supporters that Brexit would reduce bureaucracy, companies need to produce millions of customs declarations as well as new documentation like health certifications for food and proof of origin for a wide variety of goods. Shipments of mixed goods — like the parcels Mr. Anderson was carrying — can mean a plethora of paperwork for drivers to cover everything being carried.

Across Britain, the impact of the rules has caught traders by surprise, setting off a chain reaction that has threatened some jobs and livelihoods.

William Calderbank, port operations manager at Holyhead, said that while he expects much business to return, some of it will not.Credit…Phil Hatcher-Moore for The New York Times

Outraged over costly delays, Scottish shellfish exporters blockaded the Parliament in London in protest. A truck load of chips destined for a supermarket in Northern Ireland was held up for two days as the truck company sought to prove the origin of the potatoes they were made with, according to a British lawmaker. And more than 600 truck drivers have been fined for breaking a rule designed to prevent congestion that requires them to have a permit to approach Britain’s busiest port, Dover in Kent.

Under the new rules, truckers must log their consignments with the authorities before reaching ports. Relatively few arrive without the paperwork — just 7 percent at Holyhead, according to the port.

But that is because many are stuck elsewhere awaiting papers.

The new system has also raised questions about the future of one of Europe’s busiest trade routes, between Ireland, which remains part of the European Union, and continental Europe.

The quickest route for trucks is generally via a ferry from Dublin to Holyhead, then east to Dover on England’s coast, and from there a short ferry trip to Calais in France.

Before the Brexit changes, that journey via the “land bridge” was cheap and reliable, required almost no paperwork and allowed trucks to drop off loads along the way.

Under the new rules, truckers must log their consignments with the authorities before reaching ports.Credit…Phil Hatcher-Moore for The New York Times

But that route has been obstructed by a thicket of bureaucracy, and many companies are opting for direct services between Ireland and France to stay within the European Union.

Whether this reflects teething troubles or a fundamental shift is unclear, and the changes have been welcomed in some quarters.

Some environmental campaigners hope the drop in trade will be permanent and reduce the number of trucks crisscrossing Britain.

Port operators had expected a drop-off in trade as companies emptied stockpiles they had built in December in case there was no trade deal. The pandemic has also hit commerce and tourism, just as companies are adjusting to Brexit-era form filling.

But there are fears that the hit to ports like Holyhead may have lasting implications.

“Very loud alarm bells are ringing,” said Rhun ap Iorwerth, a member of the Welsh Senedd, or Parliament, for Plaid Cymru, a party that advocates independence for Wales.

“It is clear that trade is down massively through the port,” he said. “I hope this is a temporary phenomenon but I fear that new patterns of trading are being established here and I worry for jobs. The smaller the traffic through the port, the fewer people you need to work at the port.”

Virginia Crosbie, a lawmaker with Mr. Johnson’s Conservative Party, said she expected“that the fluctuations in transport patterns we are seeing at the moment will be short term,” citing the benefits of the “land-bridge” route through England.

Holyhead “is a ghost town,” the manager of a transportation company said. “You are lucky to see a handful of trucks when the ferries arrive.”Credit…Phil Hatcher-Moore for The New York Times

Others are more doubtful, noting that eight weekend ferry services from Holyhead to Dublin have already been canceled, while those between Ireland and France have been ramped up.

“Given the choice, I think a lot of that traffic has switched to the direct routes,” said William Calderbank, port operations manager at Holyhead, which is operated by Stena Line , adding that, while he expects much business to return, some of it will not.

To add to Holyhead’s problems, it is also losing business to ports in Scotland and northern England that offer routes to Northern Ireland, which is part of the United Kingdom, that generally require less bureaucracy.

It now makes little sense to send goods destined for Northern Ireland through Holyhead and then by truck north through Ireland — a popular route previously.

And while companies should get better at completing paperwork, they face additional changes in the future. The British government is phasing in its own post-Brexit rules, waving most imports through.

But, from July, it will apply full controls as the Irish and French do now.

“We are only in phase one of Brexit, we have another one coming in July,” said Mr. Calderbank.

Rob Lucas awaiting a text message that would allow him to take a load into the port. “We are all stuck in limbo,” he said.Credit…Phil Hatcher-Moore for The New York Times

That will add to the burden for companies who already face complex regulations.

Andrew Kinsella, managing director of Gwynedd Shipping, a transportation company headquartered in Holyhead, described how one consignment was held in Ireland for seven hours while officials questioned whether it should be certified as a dairy product because of milk contained in cookies’ chocolate chips.

Holyhead “is a ghost town,” he said. “You don’t see the normal steady stream of vehicles every day; you are lucky to see a handful of trucks when the ferries arrive.”

At Road King, a Holyhead truck stop, another driver, Rob Lucas, was still parked midafternoon at the spot where he arrived at 6 a.m. to await clearance to take a load into the port.

He had no idea when the text message authorizing him to move would come but did know that the delay had already wrecked his next day’s schedule.

Holyhead is operating at half its normal capacity and staff have been placed on furlough.Credit…Phil Hatcher-Moore for The New York Times

“The only way I can explain it is to say that everything used to run freely, there was no waiting for paperwork; but last Friday I was held up five hours in Kent,” he said.

“We are all stuck in limbo — one of our lads was here for four days early in January,” Mr. Lucas said. “It’s terrible, absolutely terrible,” he added, and “I can only see it getting worse before it gets better.”