After days of public silence and private agonizing over what to do about Ms. Greene — who has endorsed the executions of top Democrats, suggested that school shootings were staged and said that a space laser controlled by Jewish financiers started a wildfire — the minority leader, Representative Kevin McCarthy of California, issued a tortured statement that harshly denounced her past statements but then argued that she should face no consequences for them.

“Past comments from and endorsed by Marjorie Taylor Greene on school shootings, political violence, and anti-Semitic conspiracy theories do not represent the values or beliefs of the House Republican Conference,” Mr. McCarthy said.

The contortions over what to do about Ms. Greene came days after Senator Mitch McConnell of Kentucky, the most powerful Republican in Washington, denounced her as a threat to his party and as more senators followed his lead.

The feuding played out behind closed doors well into Wednesday evening, as House Republicans debated stripping Representative Liz Cheney of Wyoming, the chamber’s No. 3 Republican, of her leadership post, as a penalty for her vote to impeach President Donald J. Trump. 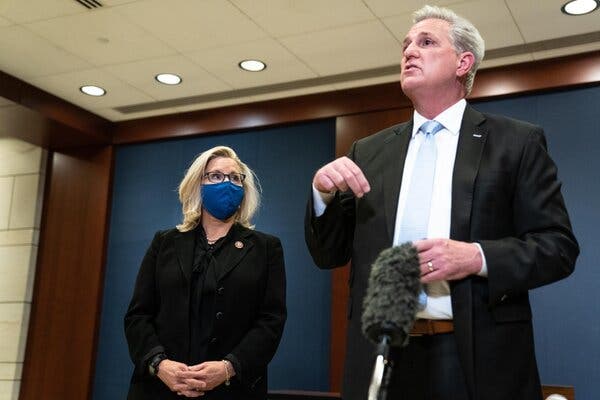 Representative Kevin McCarthy with Representative Liz Cheney on Wednesday night at the Capitol.Credit…Anna Moneymaker for The New York Times

Ms. Cheney ultimately emerged victorious after a 145-to-61 secret ballot vote. The lopsided results also amounted to a vote of confidence in Mr. McCarthy, who delivered an impassioned closing speech, according to officials in the room. In the hourslong, often heated meeting, according to people familiar with the discussion, Mr. McCarthy stood by both Ms. Cheney and Ms. Greene, and stressed the importance of presenting a united front.

In his defense of Ms. Cheney, Mr. McCarthy told lawmakers that he wanted their leadership team to “stay together.” He reminded his colleagues that they elected him as their leader, and he asked them to let him lead by picking his team.

The challenge to Ms. Greene will continue on Thursday, when House Democrats will call a vote of the full chamber to strip her of her committee assignments. Mr. McCarthy called it a “partisan power grab.”

He also warned that if they indulged the effort to strip Ms. Greene of her assignments, Democrats could try to target other Republicans, according to three people familiar with his comments, who insisted on anonymity to divulge the private exchange.

Ms. Greene faced a greater backlash from Republican colleagues in the Senate after Mr. McConnell’s criticism.

“She’s not going to be the face of the party,” Senator Rick Scott of Florida, the chairman of Senate Republicans’ campaign arm, said of Ms. Greene. Mr. Scott, who was governor in 2018 when a gunman killed 17 people at a high school in Parkland, Fla., said her effort to portray the shooting as faked was “disgusting.”

The divergent reactions from House and Senate Republicans illustrated the extraordinary turmoil in the party as it struggles to define itself without Mr. Trump in the White House.

For her part, Ms. Greene offered a modicum of contrition in a brief speech on Wednesday, according to two people familiar with the remarks, and received applause from some lawmakers. She apologized for espousing a number of conspiracy theories and emphasized that she no longer believed in them.

But she sidestepped the issue of a Facebook post she made in 2018, unearthed by Media Matters for America, suggesting that a devastating wildfire that ravaged California was started by “a laser” beamed from space and controlled by a prominent Jewish banking family with connections to powerful Democrats.

Ms. Cheney’s victory was all the more remarkable because she refused to apologize for her impeachment vote, even as several members of the ultraconservative Freedom Caucus accused her of “aiding the enemy” in voting to impeach Mr. Trump, the people said. Representative Jim Jordan of Ohio, one of the former president’s fiercest defenders, joined in and said he felt Ms. Cheney could not represent a conference that had overwhelmingly voted against impeachment.

The small group of Republicans who joined Ms. Cheney in voting to impeach Mr. Trump voiced their support for her — and some offered barely veiled criticism of Mr. McCarthy’s handling of the party’s dual crises.

Representative Adam Kinzinger of Illinois spoke in Ms. Cheney’s defense and accused Mr. McCarthy of doing more to defend Ms. Greene than he did to defend Ms. Cheney, calling it “embarrassing,” according to two people familiar with his comments.

The fate of Ms. Cheney, Representative Jaime Herrera Beutler of Washington said, was only a proxy for the larger issue looming over the Republican Party: its obeisance to Mr. Trump.

The contortions over what to do about Ms. Greene came days after Senator Mitch McConnell, the most powerful Republican in Washington, denounced her as a threat to his party.Credit…For The New York Times

“This is about the direction of our party and whether or not we’re going to be a minority dedicated to just one person or a united Republican majority,” she said.

Hours before the conference meeting, a number of other Republican women were even more explicit during an at-times emotional virtual fund-raiser for Ms. Cheney, according to two Republicans who participated.

Most outspoken was former Representative Barbara Comstock of Virginia, a longtime party official who was swept out of her suburban Washington seat in the 2018 backlash to Mr. Trump. On the video call, Ms. Comstock belittled Representative Matt Gaetz of Florida — who went to Wyoming last week to rail against Ms. Cheney — describing him as “a joke.”

In a telephone interview, Ms. Comstock warned that exiling Ms. Cheney would send a “horrendous message” and “lead to further hemorrhaging in the suburbs.”

For now, the immediate problem facing House Republicans was how they would vote on Thursday on Democrats’ resolution to strip Ms. Greene of her committees.

With Democrats in control of the House, the measure is certain to pass. But the vote will force Republicans to go on the record for the first time on whether Ms. Greene should be punished for her past comments, and it will force them to confront head-on the conspiracy theories that Mr. Trump allowed to flourish, and in some cases fed, while he was in the White House. Mr. Trump often winked at such theories, like stating that QAnon adherents “love our country.” But Ms. Greene has been more explicit in her embrace of them, and in her endorsement of violence against Democrats.

Mr. McCarthy had tried to shield his members from taking such a vote, and spoke with Representative Steny H. Hoyer of Maryland, the No. 2 House Democrat, by phone on Wednesday to try to strike a compromise. Mr. McCarthy later told reporters that he had offered to remove Ms. Greene from the Education and Budget Committees and to put her on a panel overseeing small businesses instead. Mr. Hoyer declined the offer, he said, insisting that Ms. Greene should not sit on any committees.

Lawmakers will vote on a resolution on Thursday removing Ms. Greene from her committees, citing simply the “conduct she has exhibited.” While expelling a lawmaker from the chamber requires a two-thirds vote, censuring or stripping one of committee assignments requires a simple majority, according to House rules.

Some Republicans are now arguing that voting in favor of the resolution would set a dangerous precedent because it would effectively allow the majority party to dictate which lawmakers in the minority party are fit to serve on committees, a crucial pipeline for members to advance legislation. Committee assignments have traditionally been the prerogative of the party leaders.

Others argue that members of Congress should not face punishment for remarks they made before they were elected. But Democrats said they were comfortable establishing a new set of rules whereby statements like those Ms. Greene made would prompt banishment from committees.

“A member of this House is calling for assassinations — that’s the new precedent,” said Representative Jim McGovern, Democrat of Massachusetts and the chairman of the Rules Committee. “If that’s the standard that we remove people from committees, I’m fine with that.”

Representative Tom Cole of Oklahoma, the top Republican on the rules panel, did not try to excuse Ms. Greene’s comments, calling them “deeply offensive,” “repugnant” and “unbecoming of any member of Congress.” But he argued that the matter should be punted to the Ethics Committee for a bipartisan group of lawmakers to review.

“I do worry a lot about the precedent of another party choosing” to strip committee assignments, Mr. Cole said.

But the attention Ms. Greene is receiving has been a political boon. Seizing on the attempts to boot her off her committees, she has started a fund-raising campaign claiming that Democrats are unfairly targeting her for her beliefs. Ms. Greene said the effort had netted her more than $160,000 in one day.