LONDON — Tom Moore, the redoubtable 100-year-old Army veteran whose charity walks raised $45 million for British hospitals and made him a national symbol of pluck in a country ravaged by the coronavirus pandemic, died on Tuesday.

Mr. Moore had been treated for pneumonia in recent weeks and tested positive for the coronavirus last month, his daughter, Hannah Ingram-Moore, said on Twitter on Jan. 31. He was taken to a hospital because he needed help breathing, she said, and his condition then deteriorated.

Dapper, spry and droll, Mr. Moore ambled his way into the hearts of people across Britain 82 steps at a time — the number it took to cover the length of a brick patio beside his garden in Marston Moretaine, a village an hour north of London. He did 100 laps before turning 100 last April.

Mr. Moore’s feat, which grew out of a challenge from his son-in-law, became a media sensation when Ms. Ingram-Moore publicized her father’s walks and began an online fund-raising campaign for the National Health Service. With donors that included Prince William, who called him a “one-man fund-raising machine,” Mr. Moore quickly raised 32.8 million pounds, or $45 million.

In the process, Mr. Moore became a pop-culture phenomenon. His walks were broadcast by the BBC, CNN, NBC and Al Jazeera, and his face became a staple on the front page of British tabloids. Those newspapers nicknamed him Captain Tom, his military rank until he was made an honorary colonel by the Army Foundation College. 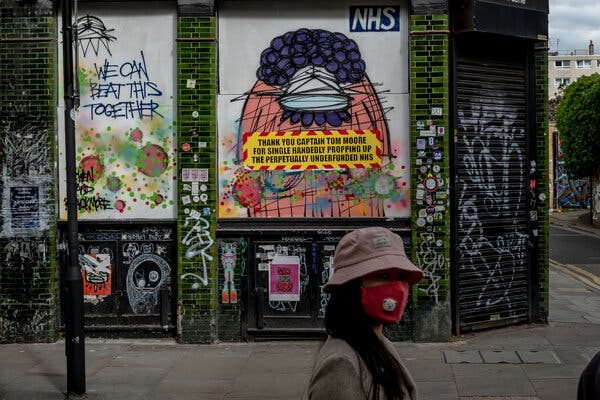 He negotiated a multi-book deal, recorded a chart-topping song and was granted a knighthood by Queen Elizabeth II, who came out of seclusion for the first time since the pandemic began to bestow the honor at Windsor Castle in July.

At 94, the queen made a striking pair with Mr. Moore — living links to a British World War II history that has been invoked during the pandemic as an example of the courage and stoicism that the country needs today. As princess, Elizabeth worked as a young driver and truck mechanic during the war, and Mr. Moore was a decorated Army officer who fought in the infamous Burma campaign.

Mr. Moore’s last days were clouded slightly by criticism of a trip that he and his family took to the Caribbean island of Barbados in December. Some took to social media to question why a 100-year-old man would vacation overseas at a time when the government was discouraging such travel because of the pandemic.

Defenders of Mr. Moore pointed out that the flight, which was paid for by British Airways, happened before Prime Minister Boris Johnson tightened England’s lockdown rules on Dec. 19 after scientists detected a fast-spreading new variant of the virus.

There is no evidence that Mr. Moore became ill on the trip. On Dec. 18, he appeared in a picture posted on his Twitter feed, wearing shorts, with the caption “Enjoying a beautiful family day in the Barbados sunshine.”

Born in Keighley, a village in Yorkshire, to a family of builders, Mr. Moore was trained as a civil engineer. In 1940, at 20, he was conscripted and assigned to the Duke of Wellington’s Regiment. First stationed in Cornwall, in southwestern England, he was chosen for officer’s training and deployed to India. He trained Indian recruits to ride motorcycles, a lifelong passion he had picked up as a boy.

A pub in Mr. Moore’s village, Marston Moretaine, was decorated with signs of support for him in May.Credit…Andrew Testa for The New York Times

Later, Mr. Moore was sent to Burma, now known as Myanmar. During his time there, the British mounted a counterattack on the Japanese occupiers in a coastal region now known as Rakhine. It was jungle warfare, fought against a fierce enemy in deplorable conditions, rife with tropical disease and insects.

“If you took your jacket off at night to hang it up, in the morning you had to shake it to shake out the spiders and the other little creatures,” Mr. Moore said in an interview with The New York Times in May.

But he added, “I don’t recall getting frightened at the time at all.”

Mr. Moore returned home after the war and built a comfortable life as the manager of a concrete company. He remained energetic until his late 90s, mowing the lawn, tending a greenhouse and driving his own car. But two years ago he fell in his kitchen, breaking his hip and a rib and puncturing a lung.

His hospitalization left him with an enduring appreciation for the doctors and nurses of the National Health Service. As the service struggled with an influx of coronavirus patients last spring, raising money for its beleaguered staff seemed a worthy cause.

“Never in 100 years, when we started, did we anticipate this sum of money would be raised,” Mr. Moore said.

Part of the money he raised is being used to create therapeutic facilities for doctors and nurses to decompress after their work treating Covid patients. Mr. Moore said he viewed his fund-raising as a way to support health workers, much as he recalled Britons supporting him and his fellow soldiers during the war.

“At that time, the people my age, we were fighting on the front line and the general public was standing behind us,” Mr. Moore said. “In this instance, the doctors and nurses and all the medical people, they’re the front line. It’s up to my generation to back them up, just as we were backed up.”

Even after turning 100, Mr. Moore had not lost his sense of adventure. In addition to Barbados, he expressed a desire to go back to India.

“That is something I would love to do, but at 100,” he said matter-of-factly, “you’ve got a certain time limitation.”