John Mahalis of Philadelphia was two and a half months from his pension’s vesting when he learned that he would be permanently laid off from his job as a toll collector on the Pennsylvania Turnpike. The news was a gut punch; Mr. Mahalis said it would leave him less able to financially weather retirement.

“It came out of the blue,” said Mr. Mahalis, 65. He had worked for the turnpike for five years after 20 years of unemployment due to an injury he sustained as a dockworker. He had loved the work, especially interacting with customers, and earned good money: By taking as much overtime as he could get, he made about $53,000 a year, along with benefits.

The job evaporated overnight when the Pennsylvania Turnpike Commission, struggling during the coronavirus pandemic, decided in June to move up its plan to lay off nearly 500 toll workers and replace them with electronic tolling. Dismissals planned for early 2022 instead went into effect immediately, a move that the commission said would help the system financially accommodate weaker traffic during the economic downturn.

The United States may be witnessing the bleeding edge of a labor force shuffle that often occurs during recessions: Employers who have been forced to cut workers turn to existing or new technology to carry on with less labor. But this time the shift could be magnified by a wave of forced layoffs at the start of the pandemic and by the fact that demand in some cases came back before employees safely could.

That has created a big incentive for employers to figure out how to produce more with fewer workers, powered by new technologies that allow for more automation.

Layoffs have shifted from temporary to permanent as the pandemic has dragged on, and many workers have moved to the sidelines of the labor market as service jobs in particular — everything from conference centers and hotels to tollbooths — are downsized or streamlined. It is unclear how quickly workers facing firings will find new jobs that are good substitutes in terms of skills and salaries.

“We’re learning that technology can replace people even more than we thought, and some of that is happening,” Jerome H. Powell, the Federal Reserve chair, said at a news conference last week. “We’re still going to need to keep people in mind whose lives have been disrupted because they’ve lost the work that they did.”

Technology adoption can lead to faster productivity growth — or at least a one-time bounce — that might improve the economy’s potential. But it can be difficult for laid-off workers to move into new jobs that pay as well and fit their qualifications.

“This story isn’t new,” said Nela Richardson, the chief economist at ADP, the payroll-processing company. “There was always a question about what to do about those left behind by technology and globalization that was never answered.”

The Pennsylvania Turnpike offers a stark example. Its workers knew that machines would eventually make them obsolete, but they thought they would have time to prepare.

Faye Townsend, 50, was on a trial period at the turnpike’s administrative building, working a job that she hoped would lead to an even more secure one before the switch to cashless tolls. When the coronavirus crisis began, she was sent back to the road system but not allowed into the tollbooth. Instead, she and her colleagues spent worried days clocking in, sanitizing the building and waiting to learn whether and when they could return to collecting.

Early in the summer, they were told that their jobs were gone.

“They had assured us, ‘Your jobs are not in jeopardy,’ and it felt like a betrayal of a relationship that you’d like to think you can trust,” said Ms. Townsend, who had worked at the turnpike for seven years and lives in Mount Joy, Pa. “There are jobs out there, but the pay is not as competitive, and I’m a little apprehensive to take anything.”

The Pennsylvania Turnpike Commission maintains that it had the authority to move to automated tolling and carry out layoffs before 2022, and it is trying to help its displaced employees find new jobs, a spokeswoman said. 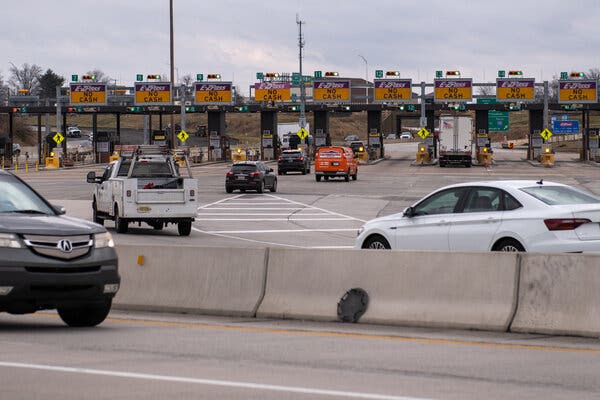 The Pennsylvania Turnpike Commission decided it wouldn’t wait until 2022 to lay off nearly 500 toll workers.Credit…Kriston Jae Bethel for The New York Times

If there is good news for displaced workers in the United States, it is that the Fed knows they are likely to take time to return to the job market. During the last economic recovery and expansion, officials at the central bank thought they knew roughly where full employment was: somewhere in the vicinity of a 5 percent unemployment rate. Around the time joblessness dropped below that, officials began to raise interest rates to slow lending and spending, which feeds through the economy to slow hiring and make sure that it does not overheat.

This time, Fed officials are poised to think more holistically about what the job market is able to achieve and to not rush to raise rates. Mr. Powell announced in August that the Fed would focus on “shortfalls” from full employment rather than deviation, suggesting that it would be comfortable with what it would have previously treated as a hot labor market.

Patrick T. Harker, the president of the Federal Reserve Bank of Philadelphia, specifically mentioned the turnpike workers in his state as an example of the sort of lingering labor market weakness that policymakers should look out for.

“I expect that, as we recover, the economic picture will remain uneven, with wildly unequal outcomes across sectors of the economy,” he said last month. Consumer changes might roil the business travel industry, he said, displacing people who had worked at hotels and conference centers.

“I’d like to challenge all of us to think hard about ways to make sure the coming recovery is not only strong but equitable,” Mr. Harker said.

It is unclear how big the labor market reshuffle will be this time. On one hand, unemployment has come down faster than many economists expected, falling to 6.7 percent from a peak of 14.8 percent. But it is still high: Adjusting for people who have moved to the labor market’s sidelines, Fed officials regularly suggest that joblessness may have been about 10 percent in December.

In Europe, about 55 percent of employers expect to employ fewer people over the long term than they otherwise would have post-pandemic, according to a recent European Central Bank survey of 72 large companies across its currency bloc. That seems to reflect that “businesses have learned to maintain production in spite of restrictions on labor inputs due to social distancing,” the authors wrote.

It is hard to tell how widely companies are reaching a similar conclusion in the United States. And it matters what sort of jobs are lost. If people lose work in fields with transferable skills and working structures, they might be easier to move into new jobs. If they are highly specialized, it might be tougher.

“It’s not easy to change careers completely midcareer,” Mr. Powell said last week. “It would be wise as a country for the longer-run productive capacity of the country if we were to look out for those people and help them find their way back into the labor force, even if it means continuing support for an additional period of time.”

If a significant number of Americans find themselves shut out of work, it could mean that some, like Mr. Mahalis, will leave the labor market permanently. Losing workers costs the economy potential room for growth. And with less income, those like Mr. Mahalis might spend less, creating an unhappy loop.

Others, like Ms. Townsend, might need to retrain. While she has a bachelor’s degree from Indiana University of Pennsylvania, she is worried that it is obsolete. She said she had thought about getting her commercial driver’s license or going to school for medical coding.

But for now, Ms. Townsend is mostly hoping she will be recalled for some sort of job working on Pennsylvania’s roads.

“Part of me is still hoping that I might be one of the ones who gets a callback,” she said. “I thought I would retire with the turnpike.”