Every winter, Pang Qingguo, a fruit seller in northern China, makes the 800-mile trip to his ancestral home to celebrate the Lunar New Year, the biggest holiday of the year in China, with his family.

The coronavirus ruined the festivities last year, stranding Mr. Pang in the northern city of Tangshanas many Chinese cities imposed lockdowns. Now, as China confronts a resurgence of the virus, the pandemic is set to spoil the holiday again, with the authorities announcing onerous quarantine and testing rules to dissuade migrant workers like Mr. Pang from traveling for the new year, which begins this year on Feb. 12.

Mr. Pang, who describes his home in the northeastern province of Heilongjiang as the “happiest place,” is anguished by the rules. He has taken to social media in recent days to express frustration about his situation and post photos of his 7-year-old daughter, whom he has not seen in more than a year. “Society is so cruel,” he wrote in one post.

Many of China’s roughly 300 million migrant workers face a similar reality as the government tries to avoid a surge in cases during what is typically the busiest travel season of the year.

The authorities have demanded that people visiting rural areas during the holiday spend two weeks in quarantine and pay for their own coronavirus tests. Many migrants, who endure grueling jobs for meager wages in big cities, say those restrictions make it impossible to travel.

The rollout of the rules have drawn widespread criticism in China, with many people calling the approach unfair to migrant workers, who have long been treated as second-class citizens under China’s strict household registration system. The workers have been among the hardest hit in China by the pandemic, as the authorities have carried out scattered lockdowns to fight the virus and employers have reduced hours and pay. 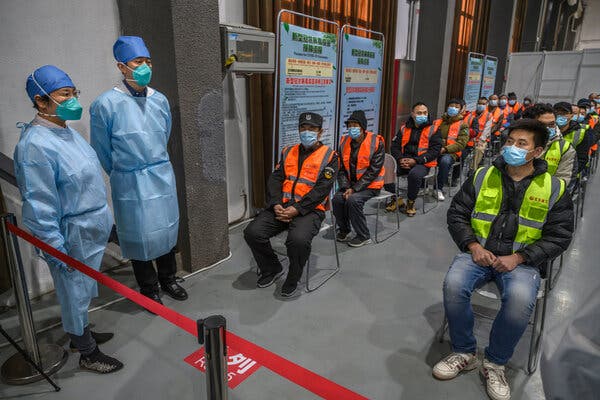 Workers waiting this month to receive a coronavirus vaccine at a medical center in Beijing. Millions of migrant workers are being encouraged to remain in town during the Lunar New Year holiday.Credit…Kevin Frayer/Getty Images

In a normal year, hundreds of millions of people travel by plane, train and car to be with their families for the Lunar New Year. The holiday, which typically includes big festive banquets and fireworks, is normally the only time many workers can return to their hometowns to see loved ones. This year, many are making plans to spend the holiday alone.

For many Chinese families the holiday will represent a second year that the pandemic has kept their families apart. Just hours before the start of the Lunar New Year last year, authorities shut down the flow of people in 13 cities in one province, affecting 35 million people.

Zhu Xiaomei, who works at a fabric store in the eastern city of Hangzhou, typically makes the 30-hour journey by train to her hometown in the southwestern province of Sichuan to be with family. This year she will spend the holiday alone for the first time, inside her 130-square-foot dormitory, which lacks a kitchen.

“Of course it is a bit upsetting,” Ms. Zhu, 40, said. “I have never experienced this feeling.”

Chinese officials are concerned that widespread travel could give rise to fresh outbreaks, especially in rural areas, where testing is less common and there has been some resistance to quarantines and other public health measures. While China’s outbreak is relatively under control compared to other countries and life is largely normal in many cities, clusters of new cases have emerged in recent weeks, prompting sporadic lockdowns and mass testing efforts. China reported 54 new cases on Wednesday, compared with more than 155,000 new cases in the United States on the same day. Chinese officials have vowed to vaccinate 50 million people before the Lunar New Year, but questions remain about the efficacy of some Chinese-made vaccines.

The authorities still expect hundreds of millions of people to travel during the Lunar New Year season, which lasts from January to March, despite the threat posed by the virus.Many of those travelers are going to large cities — not just rural areas. Several major cities in recent days have tightened restrictions on travel. Beijing is requiring visitors to test negative for the virus before being granted entry.

The Chinese government, in response to the migrants’ outrage over the new restrictions, has tried to offer sweeteners, including gift baskets, activities and shopping discounts, to encourage them to stay put.

Trains parked on Wednesday at a station in Nanjing, China, in preparation for the holiday travel season.Credit…Agence France-Presse — Getty Images

In Shanghai, officials plan to pay the phone and medical bills of those who forgo their journeys home. In Beijing, the authorities have encouraged companies to pay employees overtime, while housemaids have been told they will receive about $60 if they work during the holiday. In Tianjin, a northern city, the government has promised subsidies to businesses for every worker that stays over the holiday.

Some cities and counties have gone further, promising a better shot at accessing social benefits like schooling and health care. Some officials are offering rural migrants who forgo holiday travel favorable treatment in applications for residency in cities.

“Through these heartwarming measures, let migrant workers stay in their place of employment and spend the Spring Festival without worries,” Chen Yongjia, a Chinese official, said last week at a news conference in Beijing hosted by the State Council, China’s cabinet.

In the run-up to the holiday, the government has led a propaganda campaign aimed at persuading migrant workers to avoid traveling home. Large red banners invoking filial piety and model citizen behavior have started to appear on city streets, including in Beijing, the capital.

“Mask or a ventilator? You pick one of the two,” reads one banner.

“If you come home with the disease, you are unfilial,” another exclaims.

“If you spread the disease to your mother and father, then you are utterly devoid of a conscience,” a third banner reads.

The Chinese government is trying to avoid a major outbreak that could undermine the country’s economic recovery. Last year’s lockdowns tipped China’s economy into its first contraction in nearly a half-century, but it later bounced back as officials ordered its state-run banks to lend and factories to open. Earlier this month, China reported that its economy grew 2.3 percent in 2020, most likely outpacing other large countries, including the United States.

Getting people to spend money has been less effective. Another widespread outbreak would cast a pall on any pent-up demand for shopping that usually accompanies the Lunar New Year holiday.

“What would be really damaging is if the virus spread enough to have to shut down more factories and construction sites,” said Arthur Kroeber, managing director of Gavekal Dragonomics, an independent economic research firm.

Mr. Kroeber said the authorities did not seem eager for a repeat of last year’s draconian response. As the virus spread rapidly last year in the central city of Wuhan and the surrounding area, the authorities imposed sweeping lockdowns and suspended trains and planes across the country.

“They are trying to walk a tightrope,” Mr. Kroeber said. To impose harsh rules on gatherings for a second year “would be embarrassing,” he added.

The holiday restrictions have added to a difficult time for many migrant workers in China. Many did not work for months last year as the economy came to a standstill amid lockdowns and other restrictions. While wealthier workers in China largely kept their jobs during the pandemic, many migrants struggled to make a living amid cuts to their paychecks and hours.

Shi Baolian, 47, a worker at a chemical factory in the eastern city of Suzhou, said she had been looking forward to going home for the holiday to see her father and help him clean his house. But she canceled her plans after a cluster of cases emerged in her hometown in the northern province of Hebei.

Ms. Shi said she would celebrate the holiday instead with her husband in Suzhou. She said the city has “no new year atmosphere” and that she misses the fireworks and red-and-gold banners of her hometown.

“I can’t go home, so I will just work,” she said. “After the epidemic is over, then we will go back.”