Renewal Near the Aegean Sea

Mario was a foster child; I was a sheltered bookworm. We married young in Union, Maine. When the seven-year itch hit, we decided to renovate a cliff-side villa in Santorini for a crazy Malibu defense attorney. It was 1994, before the island’s spine sprouted resorts. Work days included transporting bags of cement on donkeys’ backs. Days off we hiked, swam, tanned on topless beaches. We toasted our relationship every pink Homeric sunset. At night, we ate fava beans and fish washed down with retsina. And olives. Oh, those olives. — Sherry Barker Abaldo 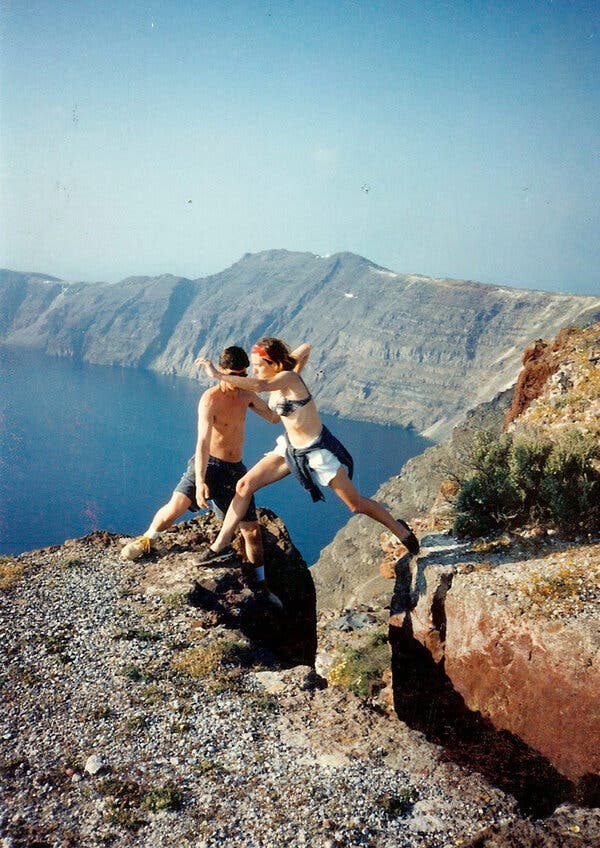 Me and Mario in Santorini.

Years ago, I was in Wisconsin visiting Mom. One night, slightly ​intoxicated, my brother laid into her and me with hatred of the president she and I supported. Stunned, we left. Politics have divided our houses since. Mom called one recent night: My brother has coronavirus. Shaken, I debated reaching out. Would he want to hear from me? Next morning, I heard about a congressman whose son had died by suicide and the support he received from Democrats and Republicans during the insurrection in Washington. I texted my brother and his wife with inquiries, well wishes. Only his wife replied. — Wendy Lukomski

I saw Anthony now and then in Los Angeles bars. We were always friendly. Then, one Friday we bumped into each other at a street fair. We ran into each other again on Saturday. Sunday, too. Still, only flirty chat and ambivalence. On Monday, while I was driving, Anthony walked right past me. I finally gave him my number and cooked him dinner a week later. Still married 17 years later, we don’t believe in “meant to be.” We believe in a mixture of heart and head: luck and commitment. — Dean Decent

Selfie in front of a ring light. Anthony is on the left.

The day before my 32nd birthday, Greg gripped my hand in the emergency room. The sonogram revealed a miscarriage. He comforted and anchored me as I waded in a sea of grief for weeks, then months. Seven years and two children later, Greg remembered to pick up my 39th birthday cake, along with hand sanitizer, as New York City lurched toward a grim shutdown. Now, almost a year later, almost a year older, almost a year at home, I walk bravely toward my 40th birthday, knowing the true milestone is our love and health. — Christine Byun

My birthday on the eve of New York City’s shutdown.

Want more from Modern Love? Watch the TV series; sign up for the newsletter; or listen to the podcast on iTunes, Spotify or Google Play. We also have swag at the NYT Store and two books, “Modern Love: True Stories of Love, Loss, and Redemption” and “Tiny Love Stories: True Tales of Love in 100 Words or Less.”