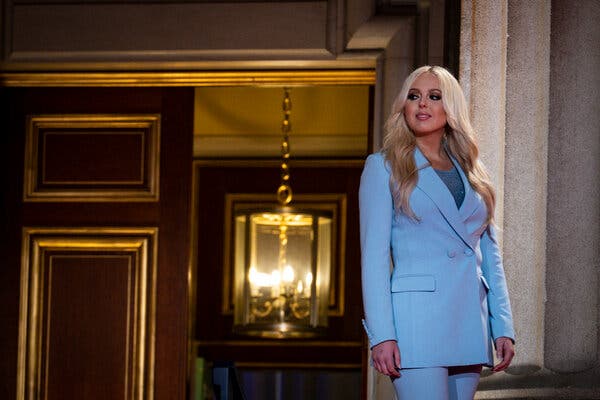 Tiffany Trump at the Republican National Convention in Aug. 2020.Credit…Pete Marovich for The New York Times

Tiffany Trump, the 27-year-old daughter of President Donald J. Trump and his second wife Marla Maples, is engaged to her boyfriend of two-and-a-half years, Michael Boulos. The announcement, along with a photo of the couple at the White House, came on the last full day of her father’s presidency.

Ms. Trump shared the news in an Instagram post: “It has been an honor to celebrate many milestones, historic occasions and create memories with my family here at the White House, none more special than my engagement to my amazing fiancé Michael! Feeling blessed and excited for the next chapter!”

The couple did not yet share a date for the wedding and representatives did not immediately return inquiries.

The youngest Trump daughter has maintained a relatively low profile over the last four years, save her occasional appearance as a campaign surrogate for her father, including at last summer’s Republican National Convention where she gave a speech ahead of the 2020 election. She graduated from Georgetown Law School last May.

Mr. Boulos, whom Vanity Fair described as her “billionaire heir boyfriend,” is four years his fiancée’s junior. He was born in Lebanon, raised and educated in Lagos, and is now based in London. One of his family’s Nigeria-based businesses, Boulos Enterprises, is a distribution and assembly company for vehicles (motorcycles, power bikes) and sells and trades the motors and equipment they require, too.

According to Town and Country, the two began dating in late 2018 and were first photographed together in Manhattan during Fashion Week that September. In short order, Mr. Boulos joined Ms. Trump at various first family events; the following month, he was introduced to the family at a Thanksgiving dinner at President Trump’s Mar-a-Lago club in Florida, and in December the young couple took photographs at a White House holiday event.