They play the matches in quiet, sparsely decorated rooms in Moscow, in tournaments that run every day and at all hours, with a hodgepodge of athletes who vary drastically in age and, in many cases, actual athleticism.

And every month millions of dollars are wagered on their every move.

This is the Russian Liga Pro, an obscure, semiprofessional table tennis competition that has over the past 10 months become the unlikeliest of sports betting phenomena in the United States.

The improbable arrival of Russian table tennis on the betting scene was swift and opportune. It came in the early days of the pandemic, when dedicated gamblers were scavenging a denuded sports landscape for something, anything, to put a bit of money on.

But bettors and bookmakers tend to find a way, and soon competitions like Belarusian ice hockey, Nicaraguan soccer and South Korean baseball were tabbed to fill the void. Later, as the big leagues cautiously returned to the scene, all of these sports returned to obscurity.

All, that is, except Russian table tennis, which has remained one of the most popular draws in American sports books for nearly a year.

“It’s fun, it’s random, and it feels like anything can happen,” said Isaiah Croft, 23, a furniture builder from Chesapeake, Va., who bets on the DraftKings website during frequent trips to Denver, where he grew up. “It’s Russian table tennis. It’s exhilarating.”

That low-stakes games of table tennis contested between little-known players in rooms as quiet as tombs could be described as exhilarating speaks to the savvy of the competition’s organizers, of whom little is publicly known, and the league’s peculiar structure.

The daily slate of matches is almost farcically crammed, a new contest starting every half-hour, churning from morning to night. Like reruns of “Law & Order,” there always seems to be one on. For American gamblers accustomed to the slow buildup to N.F.L. weekends, the glut of betting opportunities is veritable catnip.

The matches can be streamed on some betting platforms or third-party websites, but they are not much to look at. A single camera placed in an upper corner of a mostly barren room captures the action. There are no announcements, no commentary, none of the fanfare of pro sports.

Some players are young, others are graying. Some are trim, others less so. The worst of them could still easily dispatch a casual player on a basement table, but the overall standard of play is firmly below the world’s professional leagues and international competitions. 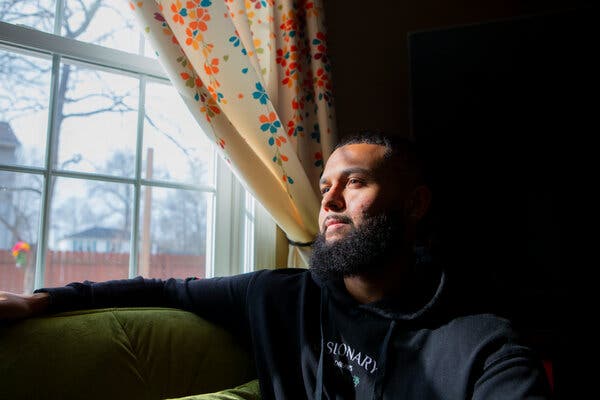 Shayan Ahmad, 23, said he was surprised by how much he had learned about Russian table tennis by gambling on it. “I have all these Russian names in my head,” he said.Credit…Calla Kessler for The New York Times

“It’s always like two old guys in gym shorts and T-shirts just playing in some empty room,” Ahmad said, “and there might be a girl with a scoreboard, the kind you used to see in gym class, where you flip the numbers over by hand.”

Drab aesthetics aside, the Russian Liga Pro — which is also referred to as the Moscow Liga Pro or Russia Liga Pro, depending on the sports book — seems perfectly structured to satisfy the appetites of international gamblers, and the numbers indicate that it is doing a fine job of that.

Jay Croucher, head of trading at PointsBet, an online sports book, said in an interview that table tennis represented more than 50 percent of the company’s total handle, or money accepted in wagers, last April after the professional sports world imploded under the weight of the pandemic. Even when major leagues around the world started to return over the summer, the game still commanded about a quarter of all betting on the site. Today, with most big sports running close to full steam, table tennis remains the fifth biggest draw on the platform, behind football, basketball, soccer and tennis.

The trend has been even more pronounced in certain states. In Colorado, for instance, table tennis drew $12.4 million in wagers across all sports books in November, making it the third biggest sport for bettors there, behind only professional and college football.

“There is an element of it which is baffling,” Croucher said. “It’s just not something you’d expect.”

A representative for the league, responding to questions by email, said the organization had been active since 2017 and that its player pool was composed of more than a thousand “former professional athletes, semiprofessionals and amateurs.” He declined to reveal prize amounts, saying only they were “sufficient and serve as an additional motivation to demonstrate their best qualities in every match and prepare well for tournaments.”

Regarding the odd hours of play — some matches are scheduled at 2, 3, 4 and 5 a.m., Moscow time — the representative explained that “many athletes wanted to play after work in the evening hours and at night.” Never mentioning gambling, he also said, “Our main goal is to develop table tennis in Russia.”

The rise of table tennis in the gambling world has not been entirely smooth. Over the summer, authorities in New Jersey and Colorado suspended betting on similarly obscure table tennis competitions in Ukraine after agencies raised concerns about potential match fixing. Those matches had also become popular among American bettors.

Last month, the police in New South Wales, Australia, whose state capital is Sydney, arrested a former member of the national table tennis team named Adam Green for his role in what was described as a “transnational gambling syndicate.” His corrupt bets on Ukrainian matches had resulted in winnings valued at 500,000 Australian dollars, or about $385,000, the police said.

The Russian Liga Pro, though, has never been flagged for any suspicious activity, and it continues to draw in more and more curious gamblers.

Ahmad, who works as a server at a Topgolf location, started betting on Russian table tennis at the start of the pandemic and has since established something of a comforting routine: Arriving home from work around midnight, he takes a shower, eases into bed and begins looking for enticing table tennis matches to bet on.

He finds the activity funny on some level, but has surprised himself with the volume of information he has retained and his relative success. Some days, he said, his table tennis winnings exceed his earnings at his job.

Ahmad said he sometimes made more money gambling on table tennis than he did at his day job.Credit…Calla Kessler for The New York Times

“People are like, ‘Yo, how do you know the names?’” he said. “I have all these Russian names in my head. I know who’s good.”

Brad Humphreys, a sports economist at West Virginia University, said the rise of table tennis was a surprise — “If I would have made a list of sports that experienced increases in betting volume, international table tennis would not have been in the top 100” — but that it followed some basic gambling wisdom.

The format, Humphreys said, is key. Points in the Liga Pro move quickly, and many table tennis gamblers, like Croft, focus entirely on fast-action midgame bets, wagering on which player will win the next point. Matches are brief, too, with winners often decided in less time than an N.F.L. halftime show. For gamblers, it is a quick rush, the equivalent of a scratch-off lottery ticket.

“Anything you can do to get the rush you get from winning or losing a bet more quickly, people tend to do that,” Humphreys said, “which is why slot machines are so addictive.”

Still, shrewd wagerers always believe they can find an edge.

Nick Webster, an emergency dispatcher from Nashua, N.H., who works overnight shifts, began betting on table tennis as a way to battle boredom. He said he had stacks of notepads to track players and matchups and to inform his picks.

He has a favorite player, a middle-aged competitor named Aleksey Lobanov, and sometimes watches Liga Pro matches on the internet for fun, even when he does not have a wager down.

He paused to acknowledge the absurdity of this, of how deeply into this world he has burrowed.

“All of a sudden I find myself rooting for Lobanov, a guy who I’d never heard of in my life, and now he’s like one of my favorite athletes,” he said. “It’s too bad I can’t go into a shop and get a Lobanov jersey.”