It was another day of mourning for Reggie Jackson and the rest of the greatest baseball players who ever lived. Another of their brethren had died, this one, perhaps, the greatest of all: Henry Louis Aaron.

“It’s kind of settled in with me over the last three hours,” Jackson said on Friday from California, his voice catching over the phone. “It’s beating me down. When you see your guys, your idols, the people that taught you so much about how to act and how to do things in life — it’s really hard.”

Jackson spoke of the sorrowful Sunday morning in October when Joe Morgan’s wife, Theresa, called him before dawn to say her husband was gone. It was not a surprise. Others had been asking Jackson for updates on Morgan — Johnny Bench, Pete Rose, Ozzie Smith, Commissioner Rob Manfred — and he could only guess the worst.

“He knows I’m calling, and he’s not calling back,” Jackson would say. “He’s in trouble. He’s in trouble physically. I think Joe’s dying.”

The Baseball Hall of Fame has lost 10 of its members in the past 10 months: Al Kaline in April; Tom Seaver in August; Lou Brock in September; Bob Gibson, Whitey Ford and Morgan in October; Phil Niekro in December; and Tommy Lasorda, Don Sutton and Aaron this month.

Their playing careers stretched from 1950 to 1988 — all were active in 1967 except Lasorda, who was inducted as a manager — and they would gather almost every summer in Cooperstown, N.Y., to welcome new members at the Hall’s induction ceremony.

“You get to know them, you get to know their families — they become teammates, in a sense, and that’s a great thing,” Jim Palmer said on Friday. “It’s a fraternity, but it’s also a family. So every time somebody passes away, it’s like you lose a family member. And then you think about how important these people were to the fans who rooted for them and cheered for them.”

Joe Torre was teammates with Aaron, Brock, Gibson, Niekro and Seaver. He wore Yankees pinstripes like Ford, and Dodger blue like Lasorda. He competed and managed against Morgan and Sutton. On Torre’s induction weekend in Cooperstown, in 2014, Kaline was the first to greet him. 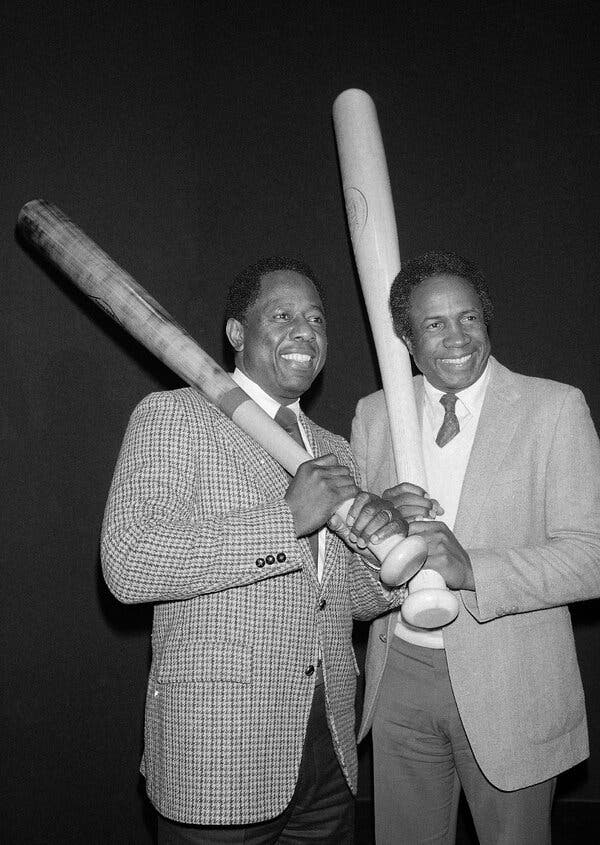 Hank Aaron was inducted into the Hall of Fame alongside Frank Robinson in 1982. For years Aaron presided over the rest of the Hall of Famers in an elite class that included Willie Mays, Ted Williams and a few select others.Credit…Dave Pickoff/Associated Press

“Once you’re a part of it, it’s a feeling that never gets old and it’s tough to describe how wonderful it is,” Torre said on Friday. “To lose all of the players and, of course, Lasorda, when we go there again — hopefully it’s this year — there’s going to be a huge hole with so many seats that are going to be vacant. It’s really sad. You know this stuff is going to happen. You don’t want to think about it.”

When Chipper Jones was elected, in 2018, Aaron said he wished they would put Jones’s plaque right next to his. Jones — second to Aaron on the Braves’ franchise list for games, hits and runs batted in — told Aaron he agreed.

“Because I know who everybody’s going to first when they walk down the hall,” Jones said on Friday, recalling his conversation with Aaron. “They’re going to see Hank Aaron’s, and if they see Hank Aaron’s, maybe they might see mine.”

For all of his career, Aaron was the first player listed alphabetically among the many thousands who have played in the majors. It was the same way with his status among Hall of Famers; perhaps Willie Mays could command the same kind of reverence, but nobody else. Aaron was so good for so long — he made every All-Star team from 1955 through 1975 — that he effectively packed two Hall of Fame-worthy résumés into one career.

“He’s in the last sentence of greatest player of all time,” Jackson said. “Aaron, Ruth, Mays, Gehrig, Mantle — I don’t know that Ted Williams gets there because he couldn’t run like those guys — and Ty Cobb and Rickey Henderson. So they’re in a class by themselves, and I think for sheer talent, Griffey is in there, too. The game was easy for those guys.”

All plaques are the same size in the Hall of Fame gallery. Officially, Aaron and Mays share the same status as Elmer Flick and High Pockets Kelly. Unofficially, a few rise far above the rest.

Beyond that, Palmer said, Aaron personified class. Jackson said Aaron carried himself with a kind of regal dignity that few others have had: Joe DiMaggio and Sandy Koufax, Jack Nicklaus and Arnold Palmer, Kareem Abdul-Jabbar and Julius Erving.

When Jackson joined the Yankees in 1977, he chose No. 44 in Aaron’s honor. Aaron had just retired, and in some ways Jackson took the mantle as a socially conscious superstar, free to speak his mind on race and other issues, he said, largely because of the example Aaron had set.

Aaron’s courage in breaking Babe Ruth’s home run record in 1974, while privately dealing with the worst of humanity in death threats and a deluge of racist, hateful mail, resonates far beyond the field.

“I can’t comprehend how he did what he did under those circumstances,” Dale Murphy, a fellow member of the Braves’ Hall of Fame, said on Friday, recalling how Aaron had to navigate segregation early in his career, as well as the hostility that later surrounded his home run chase. “When you put it all together, when you look at his statistics and then add the degree of difficulty — having your teammates bring you food, staying with people on the outskirts of town as you’re trying to learn your craft, chasing Babe Ruth and suffering, in his words, the worst year of his career from the death threats and pressures and concerns for his family’s safety, spending the night at the ballpark instead of going back to the hotel — to me, that adds up to the greatest player ever.”

It is an unofficial title, but it fits Aaron in every way. He embodied all the noble qualities we want in our heroes: bravery, humility, sustained excellence, endless grace. He was the patriarch of a Hall of Fame family that only gets grander as it dwindles.

“Even though it’s a sad time,” Torre said, “the memories you have always put a smile on your face.”