In 2019, the world’s rarest turtle suffered a staggering loss. The last known female of the species, Swinhoe’s softshell turtle, died after an artificial insemination procedure at the Chinese zoo where she and her mate lived. This left the confirmed tally for the species at just two individuals: the male in China, plus one individual of unknown sex in a lake in Vietnam.

There may still be hope for the species. Conservationists and veterinarians recently announced that the Vietnamese turtle is a female. At the same time, exhaustive hunts for other surviving Swinhoe’s softshell turtles in Vietnam have verified at least two other promising leads.

“This is very big news in Vietnam,” said Hoang Bich Thuy, the country director for the Wildlife Conservation Society. “Even people who don’t work in conservation, my friends and family, saw it on national TV and were like, ‘Oh! There’s new hope!’”

Swinhoe’s softshell turtles, which can weigh more than 370 pounds, be more than 6-feet long and live for over 100 years, hold a special cultural significance in Vietnam, where they are known as Hoan Kiem — “returned sword” — turtles. In the 15th century, a well-known folk tale goes, Vietnam’s king, Le Loi, used a magical sword to defeat the Ming dynasty army. When the battle was over, the king gave the sword to a turtle god in Hoan Kiem lake in central Hanoi.

In recent decades as Vietnam urbanized, one Hoan Kiem turtle continued to live in the lake, despite high levels of pollution. But in 2016, this last individual — a revered male known as Great-Grandfather Turtle — died, likely of natural causes. 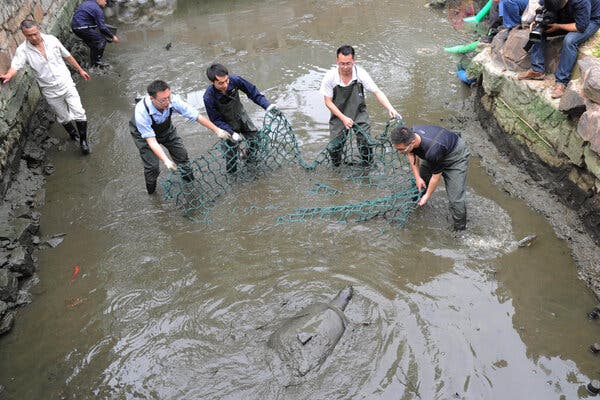 The sacred status of the Swinhoe’s softshell turtles living in Hoan Kiem lake did not extend to members of the same species living elsewhere in Vietnam, however. The species was heavily hunted for food and hammered by habitat destruction.

In 2003, Tim McCormack, director of the Asian Turtle Program, began surveying rivers where the species historically lived. He turned up a few shells in peoples’ homes, and most fishermen told him that the once-bountiful animal had disappeared. Searches in China, where the species is commonly known as the Yangtze giant softshell turtle, were also discouraging.

Mr. McCormack and his colleagues finally caught a break in 2007 when a team member managed to get a photo of a Swinhoe’s softshell turtle discovered in Dong Mo lake, in an area west of Hanoi. They hired fishermen to keep an eye on the turtle and continued work on habitat improvement, community awareness and further surveys to find additional Swinhoe’s softshell turtles. In 2014, they used genetic tools to confirm the turtle was a member of the species.

Five years after the discovery, the surveys delivered reports of another turtle in Xuan Khanh lake, just north of Dong Mo lake. In 2017, scientists from Washington State University used eDNA — a method that looks for a target species’ genetic material in environmental samples — to establish that the Xuan Khanh animal is most likely a Swinhoe’s softshell turtle.

In receiving this news of a probable second animal in Vietnam, “it’s hard to describe my overwhelmed feelings,” said Nguyen Tai Thang, project manager for the Swinhoe’s softshell turtle at the Asian Turtle Program. “It was like going on an endless expedition, and at some point, you wonder whether you are on the right track, and then you finally see a sign showing that just ahead, you’ll soon reach your destination.”

There have also been sightings of another giant turtle that lives in the same lake as the female Swinhoe’s softshell turtle. There have been no signs of reproduction, however, which could mean that the other turtle is also a female. On the other hand, it could also be that the animal is an exotic species that found its way into the lake.

Although the identities of the Xuan Khanh and the second Dong Mo turtles need to be confirmed, the hope of a second or even third Swinhoe’s softshell turtle is driving political and scientific interest. In 2019, the Vietnamese government released a turtle conservation action plan, developed with the Asian Turtle Program. Authorities in Hanoi announced an additional plan to protect members of the species found anywhere within the city’s jurisdiction — not just in Hoan Kiem lake.

“The confirmation of the female Hoan Kiem turtle brought us a new hope to restore the population of this most precious and endangered turtle species,” said Nguyen Huy Dang, deputy director of Hanoi’s Ministry of Agriculture and Rural Development.

The attempt to artificially inseminate the female Rafetus swinhoei at the Suzhou Zoo in 2015 failed. The turtle, known to her keepers as Xianxiang, died during another artificial insemination attempt in 2019.Credit…Visual China Group, via Getty Images

Last October, government officials, conservationists and fishermen trapped the Swinhoe’s softshell turtle that was first discovered in 2007 and used ultrasound to verify that she is a female. The next step, Mr. McCormack said, is to capture the other two individuals to identify them and determine their sex. This will likely happen in the spring, when water levels are lower and the reptiles become more active. If they find a male, the plan is to unite him with the female, likely in a semi-wild enclosure on Dong Mo lake.

Discussions are also underway about mating the Vietnamese female with the Chinese male, said Gerald Kuchling, a project leader for the Turtle Survival Alliance who helped with efforts to breed the species in China. Scientists previously learned that the Chinese male’s penis is heavily damaged, however, preventing him from being able to successfully deliver semen into a female. This means there is little point in bringing the two animals together — something that would be challenging, anyway, for political reasons, according to Dr. Kuchling. Instead, he said, semen could be collected from the male in China and transported to Vietnam for artificial insemination.

“Even if a male becomes available in Vietnam, involving the Chinese male through an artificial approach will still be significant to broaden the gene pool for the long term genetic health and survival of the species,” Dr. Kuchling said. “If no other male can be found, however, this approach will be the last chance, and imperative.”

From their surveys across northern Vietnam, Mr. McCormack, Mr. Nguyen and their colleagues have identified a handful of additional places that they believe other Swinhoe’s softshell turtles could still be living. “I was born in a small village next to the Red River where there used to be many individuals of this species,” Mr. Nguyen said. “My friends and I used to gather at the village temple to hear stories related to the species, told to us by elders.”

Finding more animals in the wild will ensure not only conservation of the species, he said, but that “the legend lives on.” 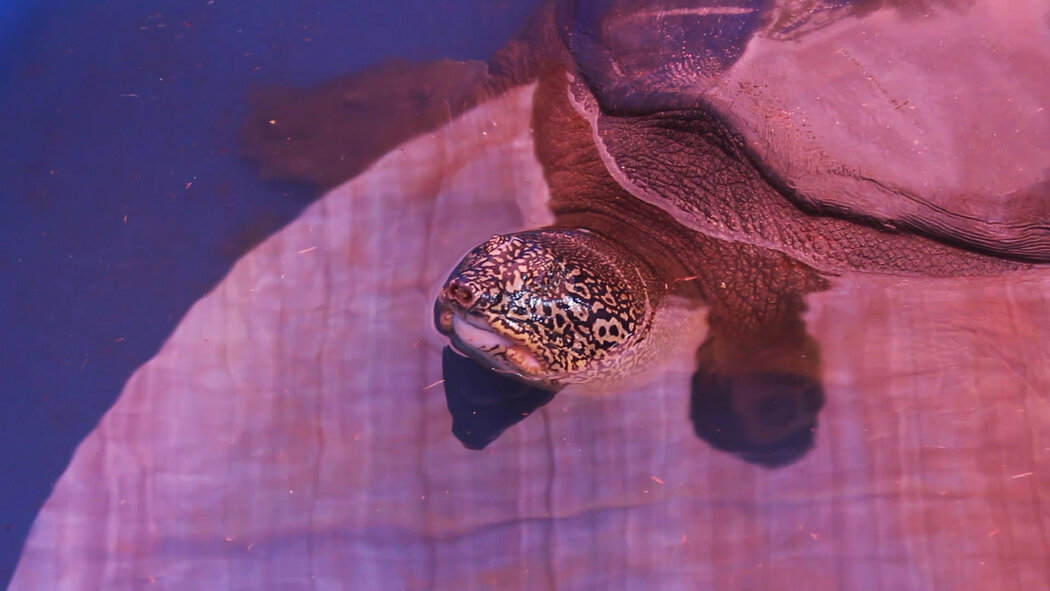