In the race to the bottom for the title of worst American president, the same few sorry names appear at the end of almost every list, jockeying for last place. There’s Andrew Johnson, whose abysmal behavior during Reconstruction led to the first presidential impeachment. There’s Warren G. Harding, responsible for the Teapot Dome scandal. There’s hapless, hated Franklin G. Pierce; doomed, dead-after-32-days William Henry Harrison; and inevitably, James Buchanan, often considered worst of all because of how badly he bungled the lead-up to the Civil War.

But as historians consider the legacy of Donald J. Trump, it appears that even the woefully inadequate Buchanan has some serious competition for the spot at the bottom.

“Trump was the first president to be impeached twice and the first to stir up a mob to try to attack the Capitol and disrupt his successor from becoming president,” said Eric Rauchway, professor of history at the University of California, Davis. “These will definitely go down in history books, and they are not good.”

“I already feel that he is the worst,” said Ted Widmer, professor of history at the City University of New York, noting that as bad as Buchanan was — and he was very bad indeed — he was “not as aggressively bad as Trump.”

“Andrew Johnson and Nixon would be the two others in the worst category, and I think Trump has them beat pretty handily, too,” he added. “He has invented a whole new category, a subbasement that no one knew existed.”

Presidential ranking may be a water-cooler exercise for historians, but it is also an official institutional pursuit. The Siena College Research Institute regularly compiles ranked lists of all the American presidents, based on the composite views of scholars. So does C-SPAN.

Various polls periodically ask regular citizens to weigh in. And on Twitter last week, Chris Hayes of MSNBC took the presidential-ranking parlor game to his followers, asking them to list the “five worst presidents of all time.” (He put Mr. Trump as the second worst, just ahead of Andrew Johnson.)

Mr. Trump was a highly divisive president, of course, and one of the confounding things about him was howtwo people could look at his behavior and make completely different assessments.

But not so much anymore.

“I would say that before the election it depended on one’s political outlook,” with conservatives applauding his tax cuts, deregulation policies and judicial appointments, said William J. Cooper Jr., professor emeritus of history at Louisiana State University. “But from the election forward, I don’t see how anyone could feel that Trump’s behavior was anything but reprehensible or that he hasn’t completely destroyed any legacy he would have left.”

He cited Mr. Trump’s refusal to concede the election; his promotion of baseless conspiracy theories attacking voting integrity; his intemperate, self-promoting behavior during the Georgia Senate runoffs, which helped ensure victory for the two Democratic candidates; and his encouragement of the crowd that rioted at the Capitol on Jan. 6.

Even conservatives from Atlanta, where Mr. Cooper lives, have had it with Mr. Trump, he said. “He has tarred and feathered himself, and I think it will blemish him for a long, long, long time.”

Douglas G. Brinkley, professor of history at Rice University and a member of the advisory panel for C-SPAN’s Presidential Historians Survey, said that Mr. Trump “was a bad president in just about every regard.”

“I find him to be the worst president in U.S. history, personally,” Mr. Brinkley said, “even worse than William Henry Harrison, who was president for only one month. You don’t want to be ranked below him.”

Mr. Brinkley brought up Richard Nixon, the only president to resign in disgrace.

“At least when Nixon left, he put the country ahead of himself at the last minute,” Mr. Brinkley said. “Now he looks like a statesman compared to Trump.”

These are all hot takes, of course — the sound of Frank Sinatra’s “My Way,” the song playing on Wednesday as Mr. Trump flew out of Washington, has barely faded from our ears — and it is too soon to know how history will judge him. But things do not augur well, said Don Levy, director of Siena’s research institute. 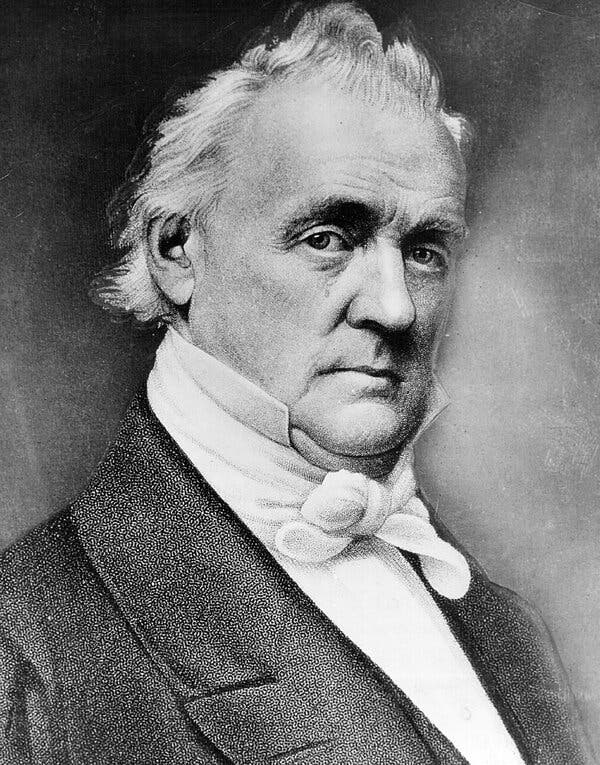 James Buchanan, who served as president from 1857 to 1861, is often considered by historians to be the worst U.S. leader because of his actions in the lead-up to the Civil War. Credit…National Archive, via Newsmakers

In the most recent Siena survey, a year into the Trump administration, the president was rated 42nd out of 44 presidents, less terrible than only Buchanan and Andrew Johnson. In almost every category — integrity, intelligence and relationship with Congress, for instance — he was rated at or near rock bottom. (The exceptions: He was 25th in “willing to take risks” and 10th in “luck.”)

“Speaking in terms of this survey, it would be surprising if Trump was meaningfully rehabilitated,” Mr. Levy said. “If the opening paragraph of any discussion starts about being impeached twice, and the second sentence is about the coronavirus, and the third is about partisanship — that’s going to be very hard to overcome.”

Sean Wilentz, a professor of American history at Princeton University, said that Mr. Trump was the worst president in history, hands down.

“He’s in a whole other category in terms of the damage he’s done to the Republic,” said Mr. Wilentz, citing the radicalization of the Republican Party, the inept response to the pandemic and what he called “the brazen, almost psychedelic mendacity of the man.”

The presidential historian Doris Kearns Goodwin, whose most recent book, “Leadership: In Turbulent Times,” looks at how four presidents confronted tough moments in history, said that it normally takes a generation to evaluate a leader. But to the extent that a president’s legacy is determined by his ability to rise to a crisis, Mr. Trump will be remembered for his failures: how poorly he handled Covid-19 and how disgracefully he behaved after the election.

“History will look with grave disfavor on President Trump for the crisis he created,” she said.

For his part, Mr. Rauchway said he believed that Mr. Trump would “crash the bottom five” on the presidential rankings, but that the bottom spot itself was uncertain. “I think he has some stiff competition” in Andrew Johnson, whom Mr. Rauchway personally regards as the worst president of all.

“If I had to predict where historiography would go, I think people would have to recognize that Trumpism — nativism and white supremacy — has deep roots in American history,” Mr. Rauchway said. “But Trump himself put it to new and malignant purpose.”

Robert Strauss, a journalist and the author of “Worst. President. Ever.,” a popular history of Buchanan, seemed reluctant to allow the subject of his book to relinquish his title.

“I can go through a litany of things that Buchanan did,” he said. “In the time period between Lincoln’s election and the inauguration” — that is, during the lame-duck period of Buchanan’s presidency — “he let seven states secede and said, ‘I can’t do anything about it.’ He also influenced the Dred Scott decision, the worst decision in Supreme Court history.”

Of course, “The difference was that Buchanan was a nice guy,” Mr. Strauss said.

He added: “He was the greatest party giver of the 19th century. He was kind to his nieces and nephews. What he was, was not a very good president.”

As they considered Mr. Trump’s record in comparison to that of other presidents, some historians said that he could have done things to salvage his reputation.

“If he had presided over a competent response to Covid, he would have won re-election easily,” Mr. Widmer of the City University of New York said. “And if he had responded with grace to his loss, a lot of people would have given him some grudging respect. ”

And yes, he added, President Trump was worse than President Buchanan.

“Trump is a worse failure because he really wanted to be re-elected, and he was rejected,” Mr. Widmer said. “Buchanan colossally failed, but at least he had the dignity not to run again.”