They call themselves the “Sisters of the Strange Sorority.” They have a playlist that includes “I’m Every Woman” and “Hit the Road, Jack” and they have never all met in person.

But they are inextricably bound: by a man who used to be president, a man whom each has accused of sexual misconduct, a man who remains embroiled in lawsuits with three of them, and whose successor they had gathered to watch take the oath of office this week.

“I’m giddy. I’m a combination of numb and giddy,” said Natasha Stoynoff, a journalist who, with six other women who have accused Donald J. Trump of sexual assault and misconduct, gathered digitally on Wednesday to celebrate the inauguration of President Biden and Vice President Kamala Harris. She was wearing a T-shirt that said IMPEACHED.

It was Ms. Stoynoff who formed this group. The women had all read one anothers’ stories, reported in various outlets, and a few of them had met. But it was not until 2019, three years after Ms. Stoynoff had first written her story for People, that she met E. Jean Carroll — with an assist from George Conway, the lawyer and husband of Kellyanne Conway, Mr. Trump’s senior counselor. 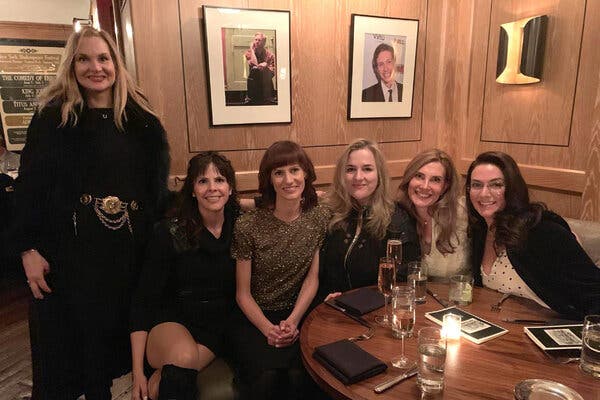 A few of the women who have accused Mr. Trump of sexual misconduct, at the New York premiere of a theater production based on their stories in 2019. From left: Ms. Harth, Tasha Dixon, Ms. Crooks, Ms. Stoynoff, Karena Virginia and Ms. Holvey.Credit…via Natasha Stoynoff

“I had emailed to thank him for sticking up for us,” Ms. Stoynoff, 56, said of Mr. Conway. “And then, two days later, he bumped into E. Jean at a party.” Ms. Carroll, a journalist and advice columnist, accused Mr. Trump of raping her in a Bergdorf Goodman dressing room in the mid-1990s, which he has denied, and for which she is suing him for defamation. Mr. Trump has denied each of the women’s accusations.

Mr. Conway introduced the two women. Soon they were in touch with others: Alva Johnson, a former Trump campaign staffer; Kristin Anderson, a photographer; Rachel Crooks, who recently ran for Ohio state legislature; Jill Harth, a makeup artist; and Samantha Holvey, a former Miss USA contestant. They communicated by text message, email and — since the pandemic — on Zoom.

The women gathered recently to “welcome” the newest member to their strange club: Amy Dorris, a former model, who came forward in an article in The Guardian in September. She asked the other women on the call, “Is it just me, or have any of you ever gotten death threats?”

They talked on Zoom on election night for hours. Karena Virginia, a yoga instructor and life coach who was the 10th woman to accuse Mr. Trump after the infamous “Access Hollywood” tape was leaked during the 2016 presidential campaign, told everyone to bring a candle, matches and an “object from nature” — which they would use for a blessing.

On a Zoom call on election night.Credit…via Natasha Stoynoff

And they gathered on Zoom on Wednesday, Inauguration Day, emotional as they closed one part of a chapter none of them wanted to be a part of. They burned sage.

“We’re melded together in an odd way,” said Ms. Carroll, 77, who was wearing a string of pearls to honor Kamala Harris. “So it’s a very strange tie.”

On this day, it was seven of them: Ms. Stoynoff in Canada and Ms. Carroll in New York; Ms. Johnson, who once ran outreach and development for the Trump campaign — she sued Mr. Trump in 2019 for gender and racial discrimination, as well as sexual harassment — from Georgia. (The two parties are currently in arbitration.)

There was Ms. Anderson, 50, the photographer, from Los Angeles, who has said Mr. Trump assaulted her in the early 1990s at a nightclub in New York, and Ms. Crooks, 37, who has described, repeatedly, her run-in with Mr. Trump in an elevator at age 22.

Ms. Harth, a makeup artist, dialed in toward the end; she was mourning her mother’s death. Ms. Holvey, the former Miss USA contestant who spoke up before the 2016 election, noted that she had “tried to warn the country” about Mr. Trump, but that he was elected anyway.

They were an animated bunch — “cutting, brilliant women,” as Ms. Carroll described them, “who see the world very clearly.”

E. Jean Carroll leaves federal court in Manhattan last October after a hearing on her defamation suit against Mr. Trump.Credit…Jefferson Siegel for The New York Times

Recently, Ms. Carroll has been writing profiles of each of the women and their encounters with the former president, feeling that their stories had been stripped of color in order to forefront facts. “They don’t like people to fall on them and say, ‘You poor thing,’” Ms. Carroll said of the group’s members. “These are living, beating heart women. They’re hilarious! They’re all characters. And they all get pissed off.”

But on Wednesday, they collectively struck a healing, ritualistic note.

“The abuser who has been in charge of this country is finally gone,” Ms. Anderson said as part of a blessing, explaining that she doesn’t use the “T-word,” as she calls the former president, because “I don’t even think he deserves that.”

Ms. Crooks had prepared a poem, called “Bye-Don,” which she read aloud.

“Dismissed by the world / As if they didn’t care, / The weight of it all / Was sometimes hard to bear.”

Ms. Johnson, 44, took out her former business card with the TRUMP campaign logo in bold lettering on the front, and seared the edge with a lighter.

“With our blessings, may he not ever hold public office ever again,” she said, holding it up so the other women could see.

“May he be held accountable for every wrong doing that he’s done.” She added more flame. “This is for every woman that has ever been ignored.”

Ms. Carroll, for one, doesn’t believe in the concept. “I understand that closure can heal a hurt and soothe a pain — but it’s not for me,” she said. “What I want is for him to say he lied. That he was in that room in Bergdorf’s.” (She may in fact still get that day in court.)

But it was something.

“For me, as soon as Lady Gaga started singing the national anthem, I felt the pent-up emotions from four years starting to leave our bodies,” Ms. Stoynoff said. “This is part one of closure, and there are more parts to come.”