Many Republicans tried not to let Mr. Trump change things, vowing never to vote for him or work in his administration — and to publicly shame those who did. Others bit their tongues and looked past his erratic behavior and racial grievances, justifying their indifference by pointing to the conservative policies he championed.

And there were others — comprising the most vocal segment of elected Republicans and a considerable portion of the voters who helped Mr. Trump win 10 million more votes than he did in 2016 — who are still with him, defying every last-straw prediction about the end of the iron grip Trump has on the G.O.P.

Here is a taxonomy of the types of Republicans Mr. Trump leaves in his wake.

They wrote open letters, boycotted the Republican National Convention twice, started podcasts and websites and raised millions of dollars for their efforts to defeat him.

The prospect of a Trump presidency was always unsettling to some Republicans who feared that his high self-regard and his nonchalance about the limits of political power were a recipe for disaster. But as his term wore on, this group came to include some surprising names like George Conway, whose wife, Kellyanne Conway, was one of the strategists who helped run Mr. Trump’s first campaign and remained loyal to him until the end of his presidency.

Mr. Conway found company with other Republicans whom the Trump wing of the party branded as “establishment” — a pejorative that recalled their work for previous presidential nominees like Senators John McCain and Mitt Romney. And their group, the Lincoln Project, worked for the past two years to convince Republican voters that Mr. Trump was a stain on their party.

The term RINO used to mean “Republican in name only,” and it’s not a description that anyone was likely to use for Mark Brnovich, the conservative attorney general of Arizona.

That was before Mr. Trump and his loyalists redefined the term to mean any party official who dared to cross him.

Mr. Brnovich is a former Maricopa County prosecutor who has fought for Arizonans’ right to attend church during the pandemic and argued against relaxing rules for casting absentee ballots. Still, he drew the ire of Trump supporters when he made what he thought were two entirely reasonable decisions as his state’s chief law enforcement officer.

First, after investigating complaints about ballots that were supposedly ruined by bleeding marker ink, a conspiracy theory that became known as “Sharpie-gate” in the right-wing media, he determined there was nothing to it. Then, Mr. Brnovich refused to sign onto a far-fetched lawsuit by the state of Texas that called on the Supreme Court to throw out millions of votes in four swing states, including Arizona.

“It’s as simple as this,” Mr. Brnovich said in an interview. “It’s about the rule of law, not the rule of political expediency.”

Mr. Brnovich is not alone. Politicians whose names were once synonymous with the party’s hard right are now ridiculed as spineless and soft by Mr. Trump’s most faithful followers because they did not support his efforts to push state legislatures and Congress to declare Mr. Trump the winner.

In Georgia, Gov. Brian Kemp and Secretary of State Brad Raffensperger are now being targeted for defeat by Trump loyalists after Mr. Trump attacked them for refusing to go along with him.

Representative Liz Cheney of Wyoming, daughter of the former vice president and liberal arch-villain Dick Cheney, now faces a challenge to her leadership post in the House Republican conference for her impeachment vote against Mr. Trump. Vice President Mike Pence, who has been so loyal to Mr. Trump that his critics mocked him as a subservient yes man, was attacked as a traitor by people who called for his execution after he refused to interfere with the formal certification of the election.

After four years of keeping most of their disagreements with Mr. Trump private, a growing number of Republicans have taken a stand against the nominal leader of their party. And they say they worry about setting a precedent for elected officials to disregard the law if it suits them politically. 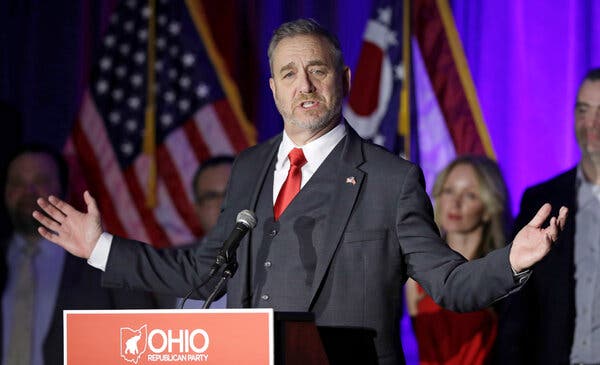 “I’m very concerned that we’re using the sophisticated and subtle tools of the law to bend what should not be bent in a direction we find politically preferable,” said Dave Yost, the attorney general of Ohio. As office holders whose power over the electoral process is significant though often overlooked, Mr. Yost said that officials like him “have to accept that there are constraints on their preferred outcomes.”

Like Mr. Brnovich in Arizona, Mr. Yost was one of only seven Republican state attorneys general who did not join an amicus brief in support of the ill-fated case brought by their colleague in Texas, Ken Paxton. They were among the small but pivotal minority of state and local office holders whose opposition helped thwart Mr. Trump and the Republicans who aided him in an attempt to deny Joseph R. Biden Jr. his victory.

The system held, but just barely.

A makeshift memorial for Brian Sicknick, a U.S. Capitol Police officer who was fatally injured when Trump supporters stormed the Capitol building.Credit…Anna Moneymaker for The New York Times

Nowhere was Mr. Trump’s hold on Republican lawmakers as evident as it was in Washington on Jan. 6 at the demonstrations leading up to the storming of the Capitol. Republican state legislators from Missouri, West Virginia, Tennessee and other states were among those who gathered to cheer on Mr. Trump. Mr. Paxton, the Texas attorney general, was also there.

In one episode that many Republicans said was especially troubling, a political arm of the Republican Attorneys General Association, known as the Rule of Law Defense Fund, paid for a robocall before Jan. 6 that called on “patriots like you” to “march to the Capitol building and call on Congress to stop the steal.”

The existence of the call, which several Republican attorneys general have since disavowed and said they were unaware of, underscored the extent to which Mr. Trump’s die-hard supporters were leaning on elected officials to support his spurious fraud claims. Two people with direct knowledge of tense discussions that took place among the attorneys general after word of the call leaked said that a donor had demanded it and made a contribution contingent upon its release.

“We’ve come to a point where there are so many individuals with great wealth who will support even the most fringe ideas and candidates,” said Richard F. Holt, a Republican who has raised money for presidential candidates dating back to Richard Nixon.

“Now just about anybody, no matter how far out, can come up with half a million dollars,” Mr. Holt said. Party leaders and major donors now see threats that Republicans could face from obscure but well-funded candidates whose primary motivation for seeking office is that they are aggrieved over Mr. Trump’s defeat.

Geoffrey Kabaservice, a historian and the author of “Rule and Ruin,” which documents the waning influence of moderates in the Republican Party, said that while the far right had always been an important constituency for Republicans in elections, its power was usually diluted by mainstream influences. But that is much less the case today.

“The Republican Party needed those people at the grass roots so it could win,” Mr. Kabaservice said. “But it also knew it needed to keep those people under control so it could attract some moderate, business-friendly people.”

“And that’s fallen apart,” he added.

The future of the party isn’t the Never Trumpers; they abandoned ship. It’s the war between the New RINOs and the Trump Republicans.

The anger and vitriol directed at lawmakers who broke with Mr. Trump has left few willing to speak up on even the most seemingly straightforward matters.

After Mr. Brnovich declined to challenge the Arizona results, commenters on far-right message boards said that he had destroyed any hope of a future in the Republican Party.

One Republican state legislator claimed to have secured $500,000 from a donor to fund an investigation of her own into Arizona’s ballots and also vowed to hinder the attorney general’s office in future election investigations by stripping it of the necessary funding.

Alex Jones, the far-right purveyor of disinformation, showed up at a rally in Maricopa County and warned of “another 1776” if Mr. Trump weren’t declared the winner.

Trump supporters listening to Alex Jones, a far-right radio host, at a protest in November outside the Maricopa County recorder’s office in Phoenix.Credit…Adriana Zehbrauskas for The New York Times

At the Capitol riot, Trump supporters urging Congress to overrule the 81 million Americans who had voted for Mr. Biden were waving the yellow Gadsden flag — once a ubiquitous sight at Tea Party rallies where conservatives railed against government tyranny.

Mr. Brnovich said he couldn’t get past the hypocrisy of it. “We all claim that we’re federalists, and we don’t want overreach,” he said, adding in reference to his fellow Republican attorneys general: “I don’t know why anyone thought it would be a good idea to get involved in a federal election. It’s a stupid idea.”

Mr. Yost, the Ohio attorney general, initially opposed Mr. Trump in 2016 but eventually got past his misgivings for the sake of party unity. Now, he said, he is still thinking about the consequences of the robocall before the riot.

“There’s a guy named Brian Sicknick — he’s dead,” Mr. Yost said, referring to the Capitol Police officer who died after being hit in the head when the pro-Trump mob stormed the Capitol. “I don’t know who swung that fire extinguisher, but I lie awake at night wondering whether or not it was one of the people who got that call.”