Welcome to the T List, a newsletter from the editors of T Magazine. Each week, we’re sharing things we’re eating, wearing, listening to or coveting now. Sign up here to find us in your inbox every Wednesday. And you can always reach us at [email protected].

A Minimalist Respite in Mexico City 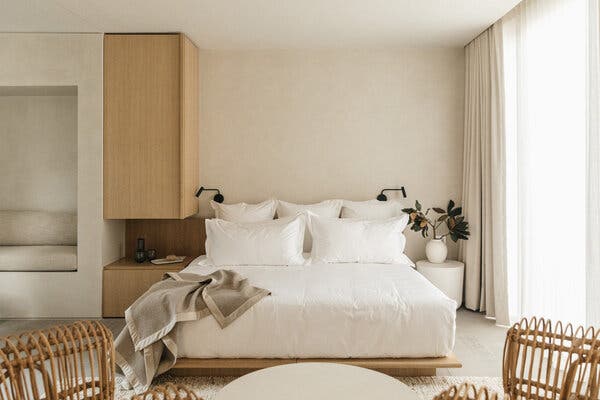 When Roberta Maceda, theowner and designerof the home and women’s wear label Octavia, purchased a dilapidated building with her mother in the leafy Condesa neighborhood of Mexico City in 2018, she enlisted the architect Pablo Pérez Palacios to transform it into her dream bed-and-breakfast. The result is the seven-room Octavia Casa: a contemporary three-story refuge whose facade is lined with golden teak panels and steel planters overflowing with native flowering plants like monstera deliciosaand jasmine. In the ground-floor lobby — a minimalist space with stone flooring and textured walls coated with chukum, a traditional Mayan stucco — is a breezy seating area with bamboo stools centered around a concrete table by the interior architecture firm Habitación 116. In the adjacent courtyard, guests can linger over breakfasts of ciabatta bread with honey and homemade hibiscus-and-ginger jam beneath the shade of a guava tree. Within each room, some of which contain reading nooks and oversize rattan chairs, are Octavia bed linens and bathrobes and, for a subtle, decorative accent, cream-coloredvases by the ceramics studio Encrudofilled with dried magnolia leaves. But perhaps the most spectacular space of all is the rooftop terrace, where guests can enjoy a glass of natural wine as they watch the sun set over the city’s vibrantly painted homes. Rooms start at $145, octaviacasa.mx.

The Life and Work of Josef and Anni Albers

When it comes to great creative partnerships, there’s perhaps no better example than Josef and Anni Albers, two artists who met in Germany in 1922 at the Bauhaus school. Later, the couple immigrated to the United States to teach at North Carolina’s Black Mountain College and they ultimately ended up in New Haven, Conn., where Josef was chairman of the design department at Yale University. The two were teachers, colleagues and friends of a number of prominent 20th-century artists, including Ruth Asawa, Buckminster Fuller, Ray Johnson and Robert Rauschenberg. Now, a new monograph, published by Phaidon and written by Nicholas Fox Weber, who runs the Josef and Anni Albers Foundation, and who met the couple in 1971, when he was 23, captures in masterful detail the many sides of the Alberses, including their rigor as artists (Josef as painter and designer; Anni as textile artist and printmaker), their deep commitment to pedagogyand the way in which their work was both connected to and still fiercely independent of each other’s. The book weaves artworks throughoutbiographies of both artists and features portraits of the people who surrounded them (the architect Philip Johnson, the painter Jacob Lawrence), as well as lively anecdotes about the couple’s working relationship. When Josef designed a fruit bowl in 1924 with ebony bearing balls, a glass disk and a chromed rim, Anni commented: “Oh, but think of what happens with blueberries.” (The bowl was more suited to larger fruit, such as apples, oranges or bananas.) And, for those of us unable to afford anartwork by either Albers, the book also serves as a beautiful object. “Anni & Josef Albers: Equal and Unequal,” $150, phaidon.com.

The Osma is a portable device that brews coffee or tea in under two minutes.Credit…Ellie Baygulov

As an avid coffee drinker who has recently become more interested in the personal brewing experience (from the pour-over to the French press), I was intrigued to learn about Osma, a new portable machine that makes a perfect cup of coffee (or tea)in under two minutes. The device, which uses biodegradable pods, was conceived of by Joey Roth, whose first foray into product design, in 2007, culminated in the Sorapot, an enchanting, modernist teapot made specifically for loose-leafinfusions. For his morerecent venture, he partnered with Dan Yue, a friend of his from college and the co-founder of Brava Home (maker of a countertop oven that uses visible and infrared light), to design a brewing vessel that prioritizes efficiency and minimalism: “I didn’t want to create another device that took up a large amount of real estate on someone’s countertop,” says Roth. Elegant and compact, the Osma is assembled by hand in the San Francisco Bay Area and weighs about a pound and a half. And it’s really easy to use: Just insert a pod, pour six ounces of water into the top container, set to the desired strength using the Osma app, hit a button and watch as a delightfully aromatic cup of coffee or tea is made. (The brand currently offers one blend of coffee, from the California-based Chromatic, thoughunfilled pods are available for those who prefer to use their own.) “Our system extracts coffee that’s a little stronger than a traditional brewed cup, but gentler and smoother than pulled espresso,” notes Roth. Not only that, but the Osma doubles as a phone charger, ensuring your readiness for whatever else the day has in store. $185, drinkosma.com.

The front (left) and back of Rosie Lee Tompkins’s “Untitled” (circa 1974).Credit…Photos by Chris Grunder. Courtesy of Anthony Meier Fine Arts, San Francisco.

Rosie Lee Tompkins’s quilts are layered, textural masterpieces that sing with life. Made from vibrant fabrics (velvet, faux fur, cottons and synthetics) that she often cut from secondhand clothes, these skillfully designed textiles are recognized as high art. Now, to coincide with a retrospective of the artist’s work at the Berkeley Art Museum Pacific Film Archive (which remains closed because of the pandemic but is offering a virtual tour in advance of the physical reopening this spring, with the exhibition extended to July 18), San Francisco’s Anthony Meier Fine Arts gallery is holding by-appointmentviewingsof seven of Tompkins’s never-before-seen quilts. Curated by Lawrence Rinder, the former director and chief curator of BAMPFA, the show offers a rare look at works unlike most others in the artist’s oeuvre: Tompkins, who lived and worked in Richmond, Calif., and died in 2006 at age 70, made hundreds of quilt tops — the sewn-together sections of fabric that act as the design layer — but typically other women were hired to complete the actual quilting (the act of stitching together the top, backing and inner batting). The pieces at Anthony Meier, though, have all been quilted by Tompkins herself. Ebullient and colorful, they incorporate patterns ranging from a black-and-white houndstooth to a Christmas floral toa Budweiser print, and in some instances are embroidered with Bible verses that move unwieldily across their tops and backs, a signature of the artist’s. The result is a remarkable dance of fabric and text— and one worth bearing witness to. “Rosie Lee Tompkins” is on view at Anthony Meier Fine Arts through Feb. 19, 2021. To schedule a viewing, visit anthonymeierfinearts.com.

Known for her colorful take onclassically patterned tablecloths, runners and other dining décor, the Los Angeles-based textile designer Heather Taylordebuted her first-ever bedroom collection last month — and it turns out she approaches making a bed in muchthe same way she setsa table, layering patterns and texture to create a sense of playfulness, comfort and warmth.The new line consists of three core items: a duvetcover, shams and a robe, all of which are 100 percent cotton and come in five of Taylor’s most popular colorways — sunflower, bluebell, black and sage ginghams, andher goldenrod plaid. Hand-woven by artisans in Chiapas, Mexico, the bedding is meant to be mixed and matched with Taylor’smuch-loved pillows, which have been a fixture of the brand since she started it in 2013 (she introduced a ruffled version last fall). “These pieces should conjure up that feeling of joy you get from putting a vase of garden roses on your bedside table,” she says. “There’s no reason your bedroom can’t feel like a dreamy suite.” From $86, heathertaylorhome.com.