Welcome to the T List, a newsletter from the editors of T Magazine. Each week, we’re sharing things we’re eating, wearing, listening to or coveting now. Sign up here to find us in your inbox every Wednesday. And you can always reach us at [email protected]. 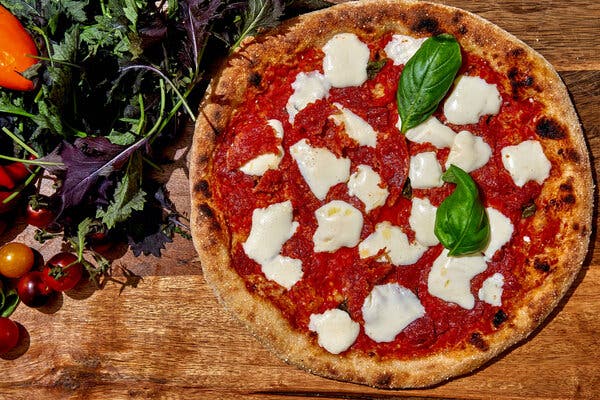 The maialina, one of La Rossi Pizza’s 10-inch blast-frozen pizzas, which is topped with organic tomatoes, local mozzarella, pork sausage and fresh basil.Credit…Courtesy of Giada Paoloni

Despite intermittent bouts of effort, almost a year of relative solitude hasn’t resulted in my becoming a more competent cook. But this isn’t as embarrassing as it could be thanks to two new food companies offering frozen options you can feel good about. I first learned of Ipsa at a pre-Covid dinner party, having assumed the chicken pot pie the host served was homemade until she told me otherwise. (In fact, it was prepared at the brand’s kitchen in Long Island City, which emphasizes thoughtful sourcing and currently delivers to much of the New York City area.) I’m also fond of the heirloom bean soup, seasonal mac and greens and beef and kimchi stew — for dessert, try the bread pudding, made with local strawberries and She Wolf Bakery sourdough. Now, thanks to La Rossi Pizza, founded by a mother-daughter team of food-industry veterans, Martina Rossi Kenworthy and Bianca Kenworthy, I can add fine frozen pizza to the rotation. It was the women’s longstanding tradition of hosting make-your-own-pizza parties for friends and family that eventually led to conversations about sharing the food with a wider audience and, after years of research in the States and Martina’s native Italy, they’ve honed a production process built on beautiful ingredients — including organic tomatoes from Los Gatos, Calif., and stone-ground flour from upstate New York — and cutting-edge technology. Their bakers use a conveyor oven that gets up to 950 degrees Fahrenheit (as opposed to the typical 500), and they’re certifying a machine that simulates the hand-stretching of dough. On the menu are the margherita, the maialina (“little piglet” in Italian), the veggie and the “just crust.” I’m not picky about pizza, but can tell you that the crust on all of these, which is crunchy on the outside and pillowy on the inside, is leagues apart from that of your typical frozen fare. What’s more, both brands are mindful about packaging, so you’ll likely end up with less waste than if you’d gotten takeout — however much I’d like to believe that man can live on pad Thai alone. As of February, La Rossi Pizza will offer nationwide shipping.

In a season of darkness, Honor Titus invokes solace and warmth. Last week, “For Heaven’s Sake,” the Los Angeles-based artist’s first solo show in New York, opened at Timothy Taylor gallery, bringing nine scenes of easy contentment to a city longing to be restored to life. On view through the end of March, the paintings — all of which were created in the last year — share Titus’s signature palette of mossy green, clay-tennis-court red and buttery yellow, anddepicta kind of metropolitan utopia that, while instantly recognizable, feels just beyond our grasp, tinged with nostalgia for a more joyous time. Inspired by Les Nabis, a group of late 19th-century French artists, including Édouard Vuillard and Pierre Bonnard, whose paintings emphasize color and pattern over linear perspective, Titus’s work evokes an infinite, if at times subtle, sense of activity. “I want the figures to continue moving when you turn away,” Titus says. And how could they not? The tennis players of “Down the Line”and “Roland Garros”are poised to swing. The woman in “Sock Hop”grooves to the music as her yellow dress twirls, one foot suspended above the shoe-scattered floor. The man in “Dewey Would Go,” who sits on a tree trunk in the park, holds a trumpet in his hands and might resume playing at any moment. Even scenes of intimacy, like those portrayedin “5 of Hearts” and “Brownstone Waltz,” convey a feeling of motion on the canvas: A man’s hand reaches for a woman’s cheek; a couple sways in their brightly lit apartment. As the painter puts it, he’s “interested in the opposite of constraint.” “For Heaven’s Sake” is on view at Timothy Taylor through March 27, 515 West 19th Street, New York, N.Y., 10011, timothytaylor.com.

Ceramics Inspired by an Egyptian Oasis

At the onset of the pandemic, the designer and artist Louis Barthélemy, who has createdtextiles for luxury houses such as Christian Dior, Gucci and Salvatore Ferragamo — and splits his time between Cairo, Paris and Marrakesh — found himself in Siwa, a small oasis nestled in Egypt’s sandy hills near the Libyan border. During the months in which he waited for a safe moment to return home, Barthélemy struck up conversations with local artisans about their unique sculptures, embroideries and ceramics. These exchanges led to a collaborativecollection of objects and clothing inspired by Ancient Egypt called Udjat (another name for the eye of Horus) and created by Barthélemy and Laila Neamatalla, an Egyptian entrepreneur and designer. Most striking within the series are the delicately curved ceramic vessels and limestone sculptures, shaped by hand by Siwa artisans from local clay and glazed with powder extracted from local salt rocks, which lends them a matte, soft white glow. The ceramics are a modern take on Ancient amphorae, or jars, and are informedby the sensuous surroundings of Siwa, with some adorned with tiny Neolithic fossils found in the nearby desert. The sculptures, meanwhile, take Ancient Egyptian deities, like Anubis, the god of death, as their subject, and though they are designed by Barthélemy, they, too, are hand-carved by an artisan in the area. ForBarthélemy, a critical part of the project is “collaborating with communities across the country that are often excluded from traditional economic circles.” Later this year, a shop at the Museum of Egyptian Antiquities in Cairo will serve as the brand’s flagship store, udjategypt.com.

“Oh, definitely: The 7-year-old Thom Browne would have worn these clothes,” says the fashion designer of his new children’s line, which debuted this week in lieu of what would have been a show of his men’s collection in Paris, and is now available on his website and in stores worldwide. The clothes — which include miniature versions of Browne’s classic gray super 120 wool suit, four-bar cardigans and oxford shirts — are perfectlyin keeping with the tailored, all-American aesthetic for which he is known. (Also available are sportswear items, knits, outerwear and sweats.) Browne has always incorporated elements of children’s wear into his line, but this is the first, more serious move toward building the category into a new and more permanent dimension for the brand. “We are at a moment where everyone just needs to smile, to have something charming and that makes us see things in a lighter way,” Browne says, adding that “the idea of kids felt hopeful to me.” But, cheerful as they may be, the clothes wouldn’t be Thom Browne without also reflecting a fantastical and eccentric sense of the world, and in the black-and-white video accompanying the launch, directed by Cass Bird, several impeccably dressed, straight-faced children are shown maddeningly bashing away at typewriters and furiously chugging milk. “It’s very worker bee,” Browne says with a laugh. thombrowne.com.

A Picturesque Bakery in Berlin

Left: the interior of Sofi features ceramics by Studio X and a wicker lampshade by Atelier Vime that is inset with a flower installation by the artist Danh Vo. Right: the bakery’s morning buns are made from croissant dough and filled with cardamon, orange and black pepper and coated in raw sugar.Credit…Volker Conradus

These days, Berlin residents joke that the closest you can get to a rave is standing in line for artisanal baked goods, which are having a moment in the city. The bakery with the longest queue is Sofi, a just-opened space tucked away in an ivy-covered courtyard in the fashionable Mitte neighborhood, where, most days, the bread — everything from a house sourdough to a Danish rye — sells out by noon.Also worth waiting for are the sugary buns filled with cardamom, orange and black pepper and the twice-baked croissants with almond crème and blackberries. The restaurateur behind Sofi is the Danish chef Frederik Bille Brahe, who already has several cultish spotsin Copenhagen, including the cafe Atelier September and the restaurant Apollo Bar & Kantine. Admired for his dedication to small-scalefarmers and diligently sourced ingredients,BilleBrahe brought on the skilled baker Marisa Williams, who has worked at Mirabelle in Copenhagen, to oversee the long fermentation process of Sofi’s loaves. While her treats are currently only available for takeaway, once Berlin’s lockdown lifts, Sofi’s seating area — with custom-made furniture crafted from elm and walnut, and an oversize lampshade by the French design studio Atelier Vime that features a flower installation by the Berlin-based artist Danh Vo — will open to guests, and more dishes, like a sourdough porridge and granola with skyr, will be added to the menu. And for summer, there are plans for pizza nights overseen by a rotating list of visiting chefs. “Berlin, in terms of its culinary scene, reminds me of Copenhagen about eight years ago,” says Bille Brahe. “Collaboration and excellent bread were key factors to success.” Sophie-Gips-Höfe, Sophienstraße 21, 10178 Berlin, sofiberlin.com.