AUCKLAND, New Zealand — The oblong object, 75 feet long with a pointed nose, looks more like a downed spacecraft than a sleek racing yacht.

Hoisted in the air and surrounded by scaffolding, the object’s two appendages stick out and run down its sides like the long, slender legs of a praying mantis. But this is not aspaceship, or even an oversize insect: It is Patriot, the yacht of a team, American Magic, that hopes to reclaim the America’s Cup, sailing’s most prestigious trophy, for the United States.

And Patriot has a big problem.

On Jan. 18, while American Magic was leading a race against an Italian challenger in the Prada Cup, the series that determines who will challenge Team New Zealand for the America’s Cup in March, Patriot capsized in dramatic fashion — effectively pulling a wheelie as it rode out of the water and then rolling over on its left side.

A hole in Patriot’s hull endangered its America’s Cup campaign. A chase boat retrieved the broken piece.Credit…Will Trafford/NZ HERALD, via Associated Press
“It very quickly went to a rescue operation,” the skipper Terry Hutchinson said of the crash.Credit…Sailing Energy/American Magic

The accident tore a hole in Patriot’s hull, sent crew members scrambling to cut teammates out of their safety harnesses and left its entire syndicate preparing to watch the multimillion-dollar boat sink into the waters of New Zealand’s Hauraki Gulf.

Instead, a crash that could have been deadly — American Magic’s skipper and executive director, Terry Hutchinson, and several crew members were briefly trapped under the fallen sail as the boat filled with water — was merely catastrophic, at least in the racing sense.

Less than a week later, on a quiet Sunday morning, three boatbuilders sanded over a giant patch that now covers the hole in Patriot’s hull. Another, with an arm full of cables, walked up the scaffolding stairs to continue the rebuilding of a sophisticated electrical system that seems more suited to a Formula One car than a sailboat.

By then, American Magic was only partway through its extensive repairs, part of a frantic effort to save Patriot, and its team’s hopes of victory, even as the competition continued without the U.S. boat. Other teams offered expertise and sent pizza. Fans topped up the team’s coffee tab at a local cafe. And about 70 boatbuilders, engineers and mechatronics technicians on the team worked in shifts to complete the work.

The repairs could easily have taken weeks without a deadline, Hutchinson said. Instead, they were completed in 11 days. On Wednesday, Patriot’s sleek hull slipped back into the water for the first time. 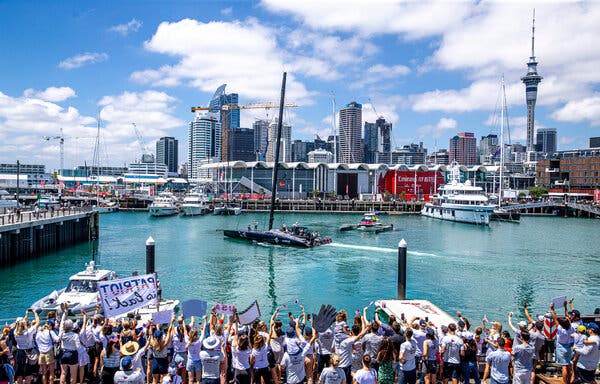 This weekend, after forfeiting four races, the American Magic team, now a major underdog, will enter the Prada Cup semifinals against Italy’s Luna Rossa. The first to collect four wins will face a British yacht for the right to race the Kiwis, who claimed the America’s Cup in Bermuda four years ago.

“We can’t be broken and so as long as we stay committed to that, which we will, then this is a clear demonstration of that and the sky is the limit,” Hutchinson said of the round-the-clock effort to bring Patriot back from the dead.

Patriot’s capsize came in the final race of the day, as American Magic led Luna Rossa out of the final turn. The wind speed suddenly increased and shifted direction, sending Patriot airborne at about 45 knots, more than 50 miles per hour.

The boat crashed down on its left side, gashing the hull. None of the 11 crew members were injured, but the damage — discovered after a chase boat scooped a piece of Patriot’s carbon hull out of the water — was substantial.

“It was a very extreme circumstance that no one can ever really be prepared for, that big a hole in the boat,” said Casey Smith, who oversees Patriot’s hydraulic system.

Flotation devices were used to keep the boat from sinking as it filled with water. Plans were discussed, revised, discarded. Nothing worked, Smith said, until a police officer “came out of nowhere” with a 40-foot-long rectangle raft that the crew wrapped around Patriot’s hull and inflated.

“That was the first time I thought, ‘OK, we’re actually going to save this thing,’” Smith said.

Trapped under a fallen sail, Hutchinson and several team members had to be rescued.Credit…Sailing Energy/American Magic

To understand the job that lay ahead for American Magic once it was saved, it helps to first understand the boat. The class of boats that race in the America’s Cup, AC75, is a new model that each entry was required to build and race in this year’s competition. The boats don’t just sail, they fly — provided they can reach speeds over 15 knots. Once a yacht’s hull rises out of the water, all that touches the surface are the boat’s two hydrofoils — those mechanical, praying mantis-like legs — and an equally thin rudder.

Even the terminology used around the boats has changed, to phrases more commonly associated with flying. “The pitch, nose up, nose down — they use exactly the same terminology in sailing now,” said Mark Orams, a professor of sport and recreation at the Auckland University of Technology. There is also now a crew position called a flight controller, responsible for stabilizing the boat while it is out of the water.

“You can go really, really fast,” Orams said of the new generation of racing yachts, “but you are going to be at a high risk of crashing.”

While an AC75 won’t go anywhere unless there is wind, all of its instruments and functions, like moving the hydrofoils in and out of the water, need power. Hydraulic power that moves or trims the sails comes from about eight crew members called grinders, who furiously pump hand-turned levers during the race. A lithium battery powers everything else.

That power system, along with other major controls, was destroyed by saltwater when Patriot capsized. The team had spares for all of the major components, and it harvested pieces from Defiance, the prototype for Patriot, to make some repairs. The team had to improvise with many yards of connecting cables, said Sean Healey, who worked on Patriot’s electronic rebuild.

Any changes to the boat, including different cables or the patch for the hole, put Patriot in danger of going over the competition’s strict weight rules. To race, the boat must be within 33 pounds of 14,374 pounds, according to Silvio Arrivabene, the team’s design production manager

Another hurdle facing American Magic now is any undiscovered bugs in Patriot’s newly rebuilt electronic systems. The tight repair schedule left only a 36-hour buffer for delays, testing, identifying and fixing bugs, and one or two practice rounds. On Wednesday, an issue with a tripping battery that briefly cut power to the boat was resolved out on the water during the boat’s first post-capsize sail. “Unfortunately, we’d like weeks to shake all these problems out,” Healey said. “We just don’t have weeks.”

On Wednesday, less than two weeks after capsizing and about 48 hours before the first Prada Cup race against Italy, Patriot headed back into the water. “We were holding our breath for the first five minutes,” Arrivabene said of that morning’s weigh-in, “but she is good.”

When the boat returned, its patch was decorated with a message of gratitude to American Magic’s competitors — bandage-shaped graphics bearing their flags and the words “Thank you.”

All three of the other teams had come to the aid of a sinking Patriot — a break from the famously bitter and litigious culture of the America’s Cup, and Team New Zealand released some of its boat builders to create the replacement hull section at one of its local facilities.

Out on Auckland’s Waitemata Harbour, Patriot got a tow for a running start to get the boat up on its hydrofoils, standard for a low-wind practice day. Soon, the rope fell away and Patriot was flying on its own. The yacht teetered in the air on one foil, then both, and then the other as it wove through the water, hitting over 30 knots.

“She picked up right where she left off — going fast,” Hutchinson said.

Patriot, and her American Magic team, will get back to racing this weekend.Credit…Sailing Energy/American Magic
Related Topics:CrewForİtsNewWeek