Bassel Harfouch was excited when he heard that the Toronto Raptors were relocating to Tampa, Fla., for an indefinite chunk of the N.B.A. season.

“Maybe we can tap into some of the fans that get interested in the Raptors,” Harfouch said, “and kind of tell them, ‘Hey, when they’re gone, we’ll still be here.’”

Harfouch, 27, owns another professional basketball team in the area: the Tampa Bay Titans. He is also their leading scorer. His teammates hold down day jobs — last season’s starting rotation included a car salesman, a financial analyst and a barber — while the team’s general manager, a former outfielder for the Yankees, motivates them with no-nonsense pep talks.

“I’m that guy who makes sure they understand there is no tomorrow,” said Gerald Williams, who retired from Major League Baseball in 2005. “They can’t afford to say, ‘Oh, don’t worry, we’ll get ’em tomorrow.’ Tomorrow? What are you talking about? You’re going to get cut today!”

The Titans are one of 35 teams in The Basketball League, a fledgling circuit for journeymen and dreamers whose part-time salaries range from about $1,500 to $4,000 a month. Before last season was cut short by the coronavirus pandemic, the Titans were drawing as many as 300 fans for home games at Pasco-Hernando State College, about 35 miles northwest of downtown Tampa. Harfouch was ecstatic when he got the team’s apparel onto the racks at a couple of Walmarts.

“I was like, ‘How’d you do that?’” David Magley, the league’s president, recalled in a telephone interview. “And he goes, ‘Well, I went and asked.’”

A galaxy or two removed from the glitz of the N.B.A., the Titans are rooting for the Raptors this season, hoping for a trickle-down effect. Though the city has produced its share of good players — and was home to the Tampa Bay Thrillers of the now-defunct Continental Basketball Association — the region has seldom been known as a hoops hotbed.

“I know there’s a market for basketball here,” said Harfouch, who said he once sold his Mercedes-Benz to help keep the franchise afloat.

A shooting guard who played briefly at Alcorn State and for a pro team in Lebanon, Harfouch got his passion project off the ground in 2019, one year after the league’s launch. His playing career, he said, was hindered by injuries, and he wanted to create opportunities for other thwarted strivers.

“I’ve been through it all, man,” said Harfouch, who went to high school in Tampa. “I wanted to give guys a platform to try to achieve their dreams.”

After a touch-and-go first season — “I was knocking on doors, looking for sponsors,” Harfouch said — the Titans found more of a niche last season, before the coronavirus pandemic forced a shutdown. Harfouch said community outreach was critical to the team’s growth: lots of meet-and-greets, lots of involvement with charities and schools. 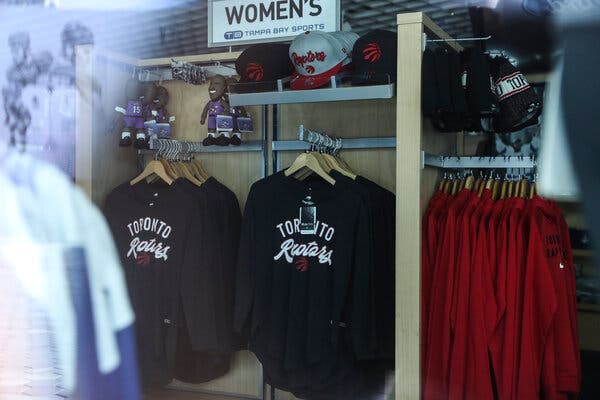 Merchandise for the Toronto Raptors is sold at Amalie Arena in Tampa, Fla., where the N.B.A. team is based for the 2020-2021 season.Credit…Eve Edelheit for The New York Times

The annual operating budget for the league’s teams ranges from about $125,000 to $250,000, Magley said — or about half of what the Nets’ Kyrie Irving forfeited for each game that he recently missed after violating the N.B.A.’s coronavirus protocols. Eventually, Magley said, he hopes to have 64 franchises across North America. The former N.B.A. players Steve Francis and Jerome Williams recently bought teams that are set to make their debuts this coming season.

“We’re really trying to get these players jobs,” Magley said. “You can come play in our league, do well and get noticed by other teams around the world.”

The plan is for this season to run from April through June, with the playoffs scheduled for July. Some of that depends, of course, on the state of the pandemic, but Magley said he was optimistic that a steady increase in vaccinations, along with ongoing preventive measures like masks, would make a season feasible by then.

Magley has a soft spot for Harfouch — “I know his story seems a little Jackie Moon-ish,” Magley said, referring to the Will Ferrell character from the film “Semi-Pro” — and for Tampa. Toward the end of his own playing career, Magley filled in for the Thrillers “for a couple of weekends,” he said, when the team was short-handed.

“It’s shocking how many wonderful athletes there are in Florida,” Magley said. “But most of them are channeled to football.”

In their own way, the Titans are eager to change some of that. The team practices in the evening so that players can work during the day.

“It’s not a league for you to come in and say, ‘I’m quitting my job,’ ” Harfouch said. “It’s a steppingstone for guys.”

He has leaned on Gerald Williams, 54, whom he met about 10 years ago when they were working out at the same recreational center. Harfouch recognized Williams from his days with the Yankees, and Williams took him under his wing. Williams, who spent 14 seasons in the majors, said he could sense that Harfouch was an oddly determined young man.

“I wouldn’t really be involved in sports anymore if it weren’t for Bassel,” Williams said. “I wanted to enjoy retirement.”

Williams, who played high school basketball, has kept in shape since retiring from baseball, and he said that had come in handy with the Titans. He picks his spots to mix it up at practice.

Williams played baseball in Tampa Bay in 2000, when the team was known as the Devil Rays.Credit…Chris Covatta/Allsport, via Getty Images

“In order to teach,” he said, “sometimes you must be able to demonstrate. Not always. But it’s good when you can.”

Said Harfouch, “He’ll come out and dunk in his Cole Haans.”

Williams has a direct management style. He likes to remind the players that good practice habits are the foundation of success, and that each person on the roster is easily replaceable.

“If you’re not hungry, trust me — we’ll make an adjustment,” he said.

He has also compared notes with another Florida-based sports executive: Derek Jeter, one of his closest friends and a former co-worker in the Bronx. Jeter is the chief executive of the Miami Marlins, who are coming off a postseason appearance. “He is locked in over there,” Williams said.

With the Titans, Williams has big goals of his own. He said he was hoping to persuade the Raptors to give Harfouch a tryout. But timing is everything, Williams said, and he wants to wait until the Titans start their season, so that Harfouch has a fresh body of work. “You want to have him be on fire this year,” Williams said.

Malcolm St. Louis, a 26-year-old forward, recalled hearing about the Titans not long after he moved to Tampa.

The team’s first season, St. Louis said, was full of “extreme highs and extreme lows.” The adrenaline from a couple of early road wins against the Owensboro Thoroughbreds was quickly offset by a long losing streak. But the Titans also had a West Coast trip, which included a stop near Las Vegas for games against the Mesquite Desert Dogs.

“Being a small-town kid and getting to see the world at that scale just by playing a game — I’ll have that moment forever,” St. Louis said.

He is itching to return for his third season with the team, he said. Everything that Harfouch promised him about the future of the league, he said, has come to fruition.

In the meantime, St. Louis has kept busy with his job at a moving service — “Have you heard of College Hunks Hauling Junk?” he asked — and has a fashion line, Meticulous Threads, that league officials are helping him promote. But these days with the N.B.A. in full swing and the Raptors nearby, basketball has been foremost in his mind.

“I just want to prove myself,” he said.