LOS ANGELES — The Tesla S.U.V. veered left off Hollywood Boulevard and charged uphill, toward the canyons and the homes beyond the scope of the star-spotting tour buses. The roads are narrow, and the stars, for the time being, are elsewhere.

“You see those palm trees up there?” asked the S.U.V.’s driver, the real estate agent Branden Williams, nodding at a frond-fringed estate in the distance. “Elvis, the Beach Boys, they all used to rent that house when they’d come to town. It’s under construction now. We just sold it. Drew Barrymore used to live there. We sold it for her. She would throw the most insane parties, legendary, back when Hollywood still had that mystique — you know, the late ’90s.”

“Before cellphones with cameras,” he added.

As the elevation climbed, more names dropped. “There’s the house that we designed with Lenny Kravitz.” “That one we sold to Megan Ellison.” “Orson Welles lived on this street.” “Slash, from Guns N’ Roses, he lived right there.” A dog grabbed Mr. Williams’s attention, and he lowered his window. “What is that, a Scottie?” he called out to its walker. “I’ve always wanted a Scottie.”

He took a slug from a can of yerba mate. He took a call. In front of the Tesla, a cement truck began beeping, signaling its intent to back up. In the back seat, Mr. Williams’s wife and business partner, Rayni Williams, rattled off numbers and rationales to the person on the other end of her cellphone. Up the hill, the taillights of the cement truck inched closer. Mr. Williams cursed, then made his own calculation.

He put the car in park.

“Get out, Rayni, hurry,” he said to his wife. To the driver of the cement truck and a half a dozen assembled workers: “We’ll just be two minutes.”

Entitled? Well, Mr. and Mrs. Williams are the king and queen of this terrain, not only this particular, 13,500-square-foot plot of land nicknamed Stanley 2 and in the process of transforming from a construction site into a sleek six-bedroom, “GoldenEye”-inspired home that will priced at around $30 million, but also of high-end Los Angeles real estate in the wake of Covid-19.

A motley crew of celebrities trust this charming, brash couple to buy and sell their homes: Jennifer Lopez, Dr. Dre, Bridget Fonda, Bruce Willis. For 10 years, Mr. and Mrs. Williams hustled for Hilton & Hyland, the storied real estate firm for which they amassed $700 million in sales in 2019 alone. In November, they quit to strike out on their own. While their brokerage, the Beverly Hills Estates, has deep roots in the rarefied 90210 ZIP code, it also embodies a way of life whose allure, they feel, no pandemic or 13.3-percent state income tax rate can dim.

“Beverly Hills, to us, is a state of mind,” Mrs. Williams said. “Glamour, palm trees, great weather, the lifestyle.” 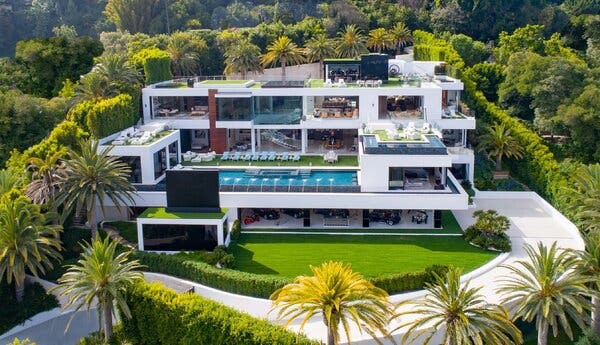 The Williamses sold this sprawling house in 2019 for $94 million.Credit…Simon Berlyn Courtesy of Williams & Williams

The historic Ennis House sold for $18 million, which is the highest price for a Frank Lloyd Wright house.Credit…Mary Nichols

If Instagram made “mom and dad” code for status and capability, then Mr. and Mrs. Williams, co-workers for 15 years, husband and wife for seven, and parents of two under 10, are the mom and dad of living large in Los Angeles. While the man who invented their car may have left the city of angels for the tax shelter of Texas, for many maximalist, high-octane or just plain rich people, Los Angeles remains as attractive as ever.

“A lot of people are going to go for tax shelters,” Mrs. Williams said, “but most of them will always keep homes here or come back. Having all the money in the world but being in a place you don’t want to live doesn’t make sense. You don’t have to be the 1 percent or a billionaire to afford to live in L.A. Some people would rather spend their money on their lifestyle versus having a fat bank account because, YOLO. Why not?”

At 11 a.m. on a recent Tuesday, Mrs. Williams, 40, was bustling around the family’s Beverly Hills home in a fitted houndstooth Alessandra Rich dress and high heels. “I get dressed every day, even during Covid,” she said. “Even to pick up the kids from school I can’t wear sweats.”

In the bathroom she and Mr. Williams share, next to blooming hibiscus and jasmine and a pentagonal shower made of purple onyx from Brazil, she keeps a gold tone, “grab and go” rack of outfits. “Branden hates it, he thinks it’s ugly,” Mrs. Williams said. “But look, all my coat options are here.” She plucked out a brown fur Gucci cape. “See? Good to go.”

Mr. Williams, 46, and his wife first bonded over clothes. In 2006, when they were junior agents at the Los Angeles real estate agency Nourmand & Associates, he complimented the dress she was wearing: a sleeveless, empire-waist Valentino with a zipper up the back, vintage, fitted, “really cool,” Mr. Williams said.

At the time, they were charged with selling $300,000 condominiums, and they still dabble in the middle-class market — whatever that means in Los Angeles. “I just found a $900,000 house in Van Nuys for my hairdresser,” Mrs. Williams said. “Really beautiful. I never want to be so jaded that all of this takes away my moral compass.”

Born in Pittsburgh and raised there, on Staten Island and in Urbino, Italy, Mrs. Williams ventured into real estate after working as a receptionist at E! and selling subprime mortgages. “I quit when I figured out what they were all about,” she said.

Mr. Williams was born in Los Angeles and came to real estate via Hollywood. He played Homeboy No. 1 in “Can’t Hardly Wait” and also appeared in such turn-of-the-century touchstones as “Never Been Kissed” (with Ms. Barrymore) and “Entourage.”

Mr. Williams with Amy Smart at the MTV Movie Awards in 1999.Credit…Jeff Kravitz/FilmMagic, via Getty Images

“And then it was 2005,” Mr. Williams said. “I was about to turn 30 and I was like, ‘Man I can’t go on another audition. This is not my dream. It’s time to embrace reality, get a real job.’” He prayed, meditated and went surfing with a friend who was a real estate agent and showed him a check he’d recently received.

“I met Rayni my first week,” Mr. Williams said. “It was like meeting my best friend — someone that liked the same music, the same style, who had an old-school mind-set.” And, “she came from mortgages, knew contracts, and I was thinking, if I have to do contracts and stuff, I’ll never make it in this business.”

They have different but complementary personalities.

“Branden doesn’t hold people’s hands,” Mrs. Williams said. “He doesn’t think that hand holding is efficient. I am a mother and a woman that’s more emotional, so I tend to be the coddler.”

Bruce Makowsky, a developer, called the couple “without a doubt, the two best brokers in Los Angeles.” He enlisted the Williamses in 2017 to sell a 12-bedroom Bel Air mansion with a Louis Vuitton-branded bowling alley for $250 million, making it, at the time, the most expensive home in America.

“I needed a billionaire to buy that house,” Mr. Makowsky said. “Unfortunately, it went on the market right after the president decided to alienate China and Russia.” After three years, the Williamses sold it to a local businessman for $94 million, an outcome that, given the circumstances, suited Mr. Makowsky just fine. “They sell the dream of living in California,” he said.

The Color of Money

The Williamses are “on” to the degree that a casual observer would figure they must be on something. In fact, Mr. Williams got sober at 29, and Mrs. Williams at 25, after he commented, “You know, you’re a good agent, but you’d be really good if you stopped drinking.” She goes to recovery meetings once a week, he goes once a month.

Never dealing with a hangover or the threat of a D.U.I. gives them a focus, Mrs. Williams said, that sets them apart. Nevertheless, they will occasionally allow wine and liquor at the new office slash clubhouse they’re opening soon on Sunset Boulevard. Picture a Soho House for the real estate community, with cabanas instead of cubicles, a self-playing piano as at the nearby Magic Castle and a juice bar: green velvet and marble as far as the eye can see. “Green is the color that they use at the Beverly Hills Hotel,” Mr. Williams said. “Also, it’s the color of money.”

They sometimes park their vintage Rolls-Royce in the driveway of a showing for good luck, their answer to the convention of an apple pie in the oven. But while their personal style leans Old Hollywood, they hawk all sorts of properties.

There’s the 24,000-square-foot house of solid concrete they’re building with Scott Mitchell, the architect behind the clean lines and aspirational angles of Nobu Malibu. “This will be here after Armageddon,” Mr. Williams said, pointing out the locations of a future waterfall, bridge, guesthouse and nightclub. “Even the garage has a view. When you see Scott’s finishes, the sophistication, the Zen, it will take you to another world.”

Sky’s the limit: “They sell the dream of living in California,” one client said of the couple.Credit…Daniel Dorsa for The New York Times

(How does a Zen master work with Mr. Williams? “He’s a doll,” Mr. Mitchell said. “Also, who, out of 7.4 billion people, wouldn’t seem like a Zen personality next to Branden?”)

And then there is the One, said to be the world’s largest home, at 105,000 square feet, and among America’s priciest, at $350 million. Indoor and outdoor swimming pools, 360-degree views, two art galleries, a 400-foot-long jogging track, a movie theater, a hookah lounge — its list of amenities make it seem less a home than a sovereign territory. Though the One is not on the market, Mrs. Williams has a clear picture of its future owner.

“They have a 200-to-300-foot yacht,” she said matter-of-factly. “They have a plane. They probably have a tax shelter in Monaco. If they’re American, they have a place in Texas or Palm Beach as their primary residence. This will be their L.A. family home where they have reunions. The wife loves wellness and yoga, she comes here to get all of her services. Her husband comes to touch base with some business stuff that he does here, and then they bring extended family friends with them because, you know, 21 bedrooms, 42 bath.”

Driving from a visit to the One, Mr. Williams sped through every yellow light, honking his horn, to make it to a showing of a modest (by comparison) three-bedroom home in West Hollywood. The Williamses were representing the seller. This was the third time they’d shown the home to this particular potential buyer. The sky had grown dark, the 360-degree views dwindled to 45. What fantastical vision could they call forth in this place?

The potential buyer made an offer, and the house is now in escrow. The Williamses have moved on to the next.